The tension is thick in “On the Move,” presented by City Ballet of San Diego last Saturday. Dancers race across the stage of the Conrad Prebys Performing Arts Center as if pursued by the urgent Philip Glass score. Moments of lovely classical expansiveness, as if the dancers—and all of us—can take a breath, give way to contortions and sharp angles.

I was mesmerized by the dancers’ wrists, which in all three pieces are often flexed at dramatic 90-degree angles, both up and down. In another arresting gesture, they hold their wrists crossed as if shackled.

Choreographer Geoff Gonzalez created this suite of three dances, all to music by Glass, as a reflection on the particular challenges the pandemic posed for dancers. A dancer’s onstage career is brief; for many, this period of curtailed training and performing may represent a significant portion of their dancing lives. 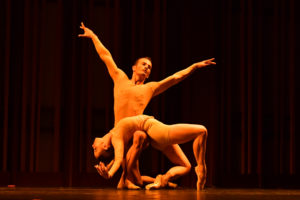 The opening piece, “Within the Hourglass Desert,” was inspired by a poem by Kurt Hearth with the image of each person as a grain of hourglass sand … reflected in the simple, sand-colored tees and trunks worn by both the principals, Iago Breschi and Ariana Gonzalez, and the eight-woman corps.

Breschi, one of the company’s Brazilian powerhouse men (the other is Lucas Ataide), takes Gonzalez into big, gorgeous lifts to Glass’s Concerto for Violin and Orchestra. Yet each seems to have private griefs: Gonzalez, always a deeply expressive dancer, looks stricken and wipes her hands down her face. Breschi casts his gaze over the audience as if searching for something important he’d lost.

The strong corps alternates between graceful classical poses and angular movements that squiggle through their bodies. And there are those wrists, sharply flexed or held as if bound. 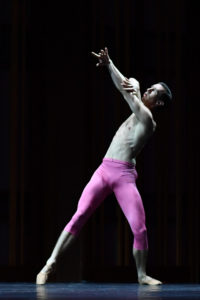 “Solitude” is set to Glass’s Mad Rush, and mad rushing pervades this intense solo. Brian Heil runs and stops, falls and gets up. He crosses his wrists, constrained, then bursts free and leaps as if reclaiming his place on the stage. There’s no resolution, no ultimate liberation, which feels appropriate for this limbo time when the audience had to show proof of vaccination and we all wore masks. Still, this piece, the program’s one premiere, felt as if it needed to marinate a bit. (The other two dances premiered in July.)

The finale, “Unbroken,” is so high-energy that watching it feels like getting a workout. To the opening horns of Glass’s Symphony #10, the dancers dash onstage and face us, crouching as if ready to spring. They’re dressed in vivid red, the eight women in trunks and bra tops, their hair swinging in ponytails and feet in ballet slippers rather than pointe shoes; the three men wear red trunks and black tees.

They link hands in a balletic line … that turns into crack-the-whip. At one point, four women hit poses with such fierce articulation, they could be doing hip hop. The playful choreography even offers a whisper of “West Side Story” as the men circle one another warily. Ataide and Shannon Romeo do a goofy pas de deux where they connect palm to palm, then with the soles of their feet. 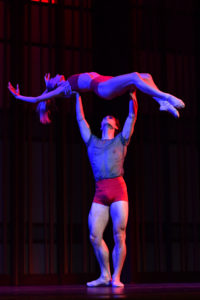 “We’re still here.” And more. As rotten as this pandemic time has been, it also offered an opportunity to go into the chrysalis … and transform. Gonzalez has made strong dances for City Ballet for several years, but this work shows a new level of invention that’s dazzling.

In “Within the Hourglass Desert,” for example, there’s a moment when Ariana Gonzalez and Breschi stand face-to-face and do a sinuous head dance, bobbing toward each other but not touching. It’s kind of weird, and I have no idea what it means, but I love that I’d never seen dancers do this before.