The combination of “Tomorrow” and red ringlets are so iconic that most of us have an Annie memory from years past. This national tour, on its swing through San Diego, will be that memory for the throng of youth who flocked to the December 28 delayed opening at the Civic Theatre, where the production runs through January 1. 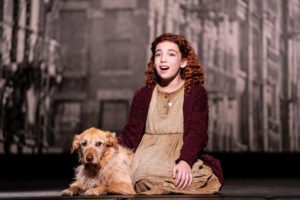 With book by Thomas Meehan, music by Charles Strouse, and lyrics by Martin Charnin, Annie has enjoyed a wide variety of iterations since its arrival on Broadway in 1977: tours, revivals, films, and even an NBC live production just last year. Like its predecessors, this rendition, directed by Jenn Thompson (who originated orphan Pepper on Broadway), ultimately succeeds in generating smiles, despite its somewhat tired source material.

The musical follows Annie, a spirited, optimistic 11-year-old who lives in a New York orphanage. Despite the dire circumstances of a Depression-era winter under the continued tyranny of intoxicated and abusive headmistress Miss Hannigan, Annie maintains a sense of hope about the future and believes that she will one day find her parents. When a two-week Christmas visit with billionaire Oliver Warbucks results in an unexpected connection between the two, Annie becomes a household name as he pulls out all of the stops – the radio, the FBI, and even President F.D.R. – to find Annie’s family at long last. 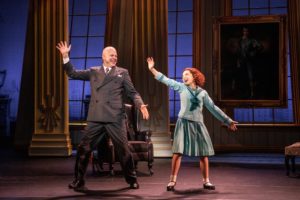 The performers in the production do a lovely job of telling the sentimental story. In particular, Ellie Rose Pulsifer, who plays Annie, has a gorgeous belt that holds up to the character’s timeless songs including “Maybe,” “Tomorrow,” and “I Don’t Need Anything But You.” Pulsifer takes the audience on an unexpectedly emotional journey; not only does she portray the character’s sunniness and hope throughout most of the show, but the utter devastation she experiences at losing a possible life with Daddy Warbucks is heartbreaking. I felt a deep sense of sorrow as she sat in the dark with her suitcase singing the “Maybe” reprise, and that feeling of empathy I experienced, quite frankly, caught me off guard. This depth of characterization is rare to see in such a large venue, but even moreso for a young performer. Pulsifer is simply outstanding.

She is joined onstage by a cadre of other talented leads and supporting players as well, including Christopher Swan as Oliver Warbucks, Julia Nicole Hunter as Grace Farrell, and Stefanie Londino as Miss Hannigan (each ably shining in their respective roles), Nick Bernardi and understudy Kaley Ware as the outlandish Rooster and Lily, and an energetic ensemble, 5 rough and tumble orphans, and a terrier rescue. And, despite challenges including a Tuesday show cancellation thanks to travel delays as well as recent illnesses on tour, the actors brought a positive energy to a show and the production experienced very few hitches. 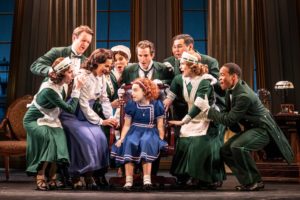 The 2022 company of ANNIE. Photo Credit: Matthew Murphy and Evan Zimmerman for MurphyMade.

I will say that I was disappointed by a couple of scenes of the show that lacked the lighting to effectively capture all characters onstage: specifically, the opening orphanage scene (and its quintessential tune “It’s a Hard Knock Life”) as well as some early scenes at the Warbucks estate were unevenly lit. While I am not sure if this can be attributed to the light plot, blocking, or the combination of spotlights and understudies, I found it distracting to have singing or speaking performers in partial darkness. Those moments aside, however, overall ambient lighting was effective (Philip Rosenberg), as were the sets (Wilson Chin) and costumes (Alejo Vietti). While simple in nature, I found that the well-attended-to details successfully transported me into 1933. Furthermore, the orchestra’s warm, resonant sound (led by Music Director Elaine Davidson) snugly tucked me back into my own positive memories of Annies past. 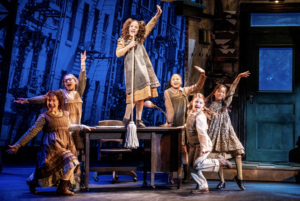 That said, while nostalgia is lovely (and the talent on stage was surely of a caliber that I’d expect for a national tour), I found myself wondering if the charm of this story might simply fade away as the years go by. After all, the references are less and less familiar and relatable. The life of the billionaire has begun to lose some of its mystery in a world of social media and reality TV (and Twitter!). As for the storyline, the relationship between Annie and Warbucks develops almost entirely offstage, while other elements of the plot and characters lack emotional tethers or feel vaguely woven together… is it too much to expect that the takeaways of optimism and chosen family are enough to keep this story alive? Only time will tell.

For the moment, however, Annie offers a way to bask in beloved memories and make new ones, and there will surely be quite a few people doing just that before the show leaves town January 1.