Alice Childress’ 1950s-era play, Trouble in Mind, is receiving a fair amount of contemporary attention, including making its Broadway debut. There’s a reason for this attention: the play is remarkably fresh, and Delicia Turner Sonnenberg’s production for The Old Globe encourages audiences to reflect on what has and hasn’t changed in 65 years. 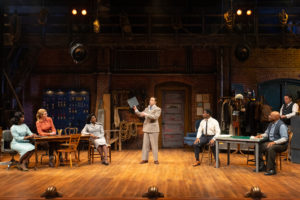 A company of mostly Black actors is starting rehearsal for a play titled Chaos in Belleville. This anti-lynching play is being directed by Al Manners (Kevin Isola), who seems to feel that the company needs to be whipped into shape (to use an unfortunate choice of words). Manners quickly runs afoul of his star, Wiletta Mayer (Ramona Keller), who understands that this play provides much needed work for the actors but who also has considerable doubts about its quality.

Tensions build quickly as rehearsals begin. The Black actors have caucused, and Forrester has advised the younger performers about how to behave and how not to behave so that they won’t get into trouble. Willetta, however, has an unhappy history with Manners, and she bristles when he criticizes her performance as being less than authentic. It turns out that Willetta has mostly played stereotypical roles and direction to “be authentic” goes against what has made her successful. It also doesn’t help that Manners phrases his direction in a racially insensitive manner. 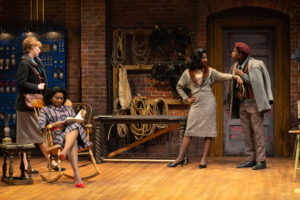 The Old Globe has given Trouble in Mind a first-class production. Lawrence E. Moten III’s theatre-within-a-theatre scenic design features lighting panels and sound equipment that’s located on the floor just beneath the stage. Sherrice Mojgani’s lighting design makes the lighting produced by the on-stage equipment look authentic, and her enhancements to that lighting are subtle and effective. Nicole Jescinth Smith’s costume design evokes the play’s mid-1950s period, when professional people dressed up to go to work. Luqman Brown’s sound design gets the theatre’s recorded applause generator to work precisely on cue. I understand that the performers all wear wireless mics.  Even so, I find that there is often an adjustment period after the initial curtain rise where the performers are difficult to understand and then hearing them improves. It was thus once again on opening night of Trouble in Mind.

Ms. Sonnenberg has eschewed focusing on Wiletta as the play’s star in favor of balancing the ensemble. I found that to be an excellent strategy, as it allows the various performers to come to the fore while not diminishing the play’s overall effect. As a result, however, no one performance stood out.

Ms. Childress might have been pleased with the contemporary attention Trouble in Mind is receiving, but I’m also certain that she would have been quick to point out how relevant her play’s analysis of racism is to contemporary society.

Performs through March 13, 2022, on the Donald and Darlene Shiley Stage in the Old Globe Theatre, part of the Globe’s Conrad Prebys Theatre Center in San Diego’s Balboa Park (1363 Old Globe Way). The performance schedule is Tuesdays and Wednesdays at 7:00 p.m., Thursdays and Fridays at 8:00 p.m., Saturdays at 2:00 p.m. and 8:00 p.m., and Sundays at 2:00 p.m. and 7:00 p.m. Parking is available at no charge throughout Balboa Park. Proof of COVID vaccination or negative test is required. Masks are required at all indoor locations.