La Jolla Playhouse has enjoyed an ongoing relationship with Charlayne Woodard, both as an actor and as a playwright. The Playhouse has also produced Ms. Woodard’s play, The Night Watchers, and she’s appeared as an actor in several Playhouse productions, including A Midsummer Night’s Dream and The Good Person of Setzuan. Her new play, as both playwright and actor, is titled The Garden, and it’s a layered beauty hiding in a deceptively simple premise. 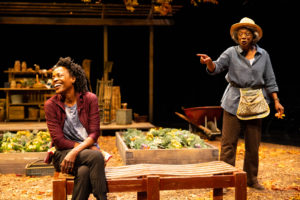 The premise is well-worn: two characters meet after a period of separation. They are wary of each other. Each has secrets, and over the course of the play the secrets come to light and affect both how the audience sees the characters and how they see each other.

In the case of The Garden, the two are both women: Claire Rose (Stephanie Berry) and Cassandra (Ms. Woodard), and they are mother and daughter. It has been three years since they have seen each other, and Cassandra suddenly appears at the garden that is Claire Rose’s pride and joy, a project to which she attends daily. Cassandra has come hoping for closure from past conflicts, and Claire Rose isn’t sure that she’s ready to reconcile. There are reasons for this dynamic, and they play out as the two women explore their relationships, past and present, with family members and each other.

It all seems conventional enough until there is a sudden and ambiguous ending at about the 90-minute mark. The ending provides the play’s layering, and it will provide audiences with lots to think and talk, perhaps argue, about on their way home. 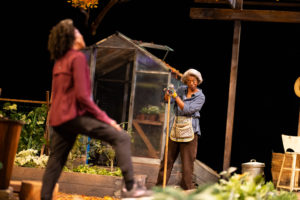 Working in a real garden

The Playhouse has provided an intimate and detailed production in its Sheila and Hughes Potiker Theatre. The seating has been configured with audience on three sides of the stage, and the show has been co-directed by Patricia McGregor and Delicia Turner Sonnenberg to ensure that there is no advantage to sitting in one location or another. A highlight of Rachel Hauck’s scenic design is that the garden contains real flowers and what looks to be a working greenhouse. It is autumn in upstate New York, and leaves fall whenever the breeze wafts through. Karen Perry’s costume design provides gardening clothes for Ms. Berry and casual clothes for Ms. Woodard. Sherrice Mojgani’s lighting design is beautifully layered, like the play itself. Likewise, Luqman Brown’s sound design.

The directors have worked with the actors to craft rises and falls in the action and allow the secrets to emerge as if they were organic. The actors respond with both technical skill and empathy. The amount of care invested makes the ending all the more powerful.

The Playhouse plans only three productions for its 2021-22 season. The Garden gets this abbreviated season off to a promising start.

Additional production credits are Stage Manager: Chandra Anthenill, Wig Design: Nikiya Mathis, Original Music: Kirsten Childs, Dramaturg: Shirley Fishman, and Casting: Erica Jensen. The Garden is a co-production with Baltimore Center Stage. Performs Tuesdays and Wednesdays at 7:30pm; Thursdays, Fridays, and Saturdays at 8pm; Sundays at 7pm; matinees Saturdays and Sundays at 2pm, through October 17. Parking is not available immediately adjacent to the theater at this time – check with the box office about parking options if you have questions.