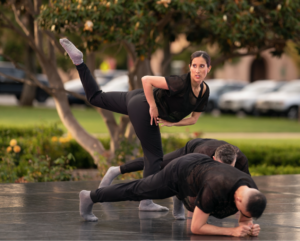 The air crackles with menace in the gripping “Controlled Chaos,” a piece by Tristian Griffin performed by Malashock Dance at Liberty Station last weekend. To a Michael Wall score that mixes crowd noises, breaking glass, and what sounds unnervingly like gunshots, five dancers advance warily, arms raised as if to ward off an attack. They stay low, doing a crouch-walk or corkscrewing to the ground. Even when the movement gets more expansive, in a powerful duet by Megan Donaldson and Justin Viernes, the tension never lets up.

The society Griffin creates onstage feels dangerous … and like an apt reflection of the present moment, in which the show took place outdoors on a chilly evening since we’re not yet done with COVID; and with a flag directly behind center-stage flying at half-staff in honor of the country’s latest mass shootings. 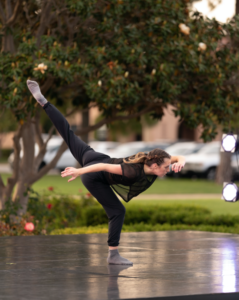 Griffin, a Kansas City, Missouri-based dance maker, is one of three choreographers being considered as a successor to John Malashock, who has led Malashock Dance for 34 years. This edgy piece—and the ease with which company members took to Griffin’s movement style—promises some exciting new directions, whichever candidate is chosen.

Not that Malashock is out of the game. He made three of the five dances shown last weekend. And he pulled together the continent-spanning program, titled “Horizons,” that included both Griffin’s piece and a dance—as well as guest artists—from Newport, RI-based Island Moving Company, which does contemporary ballet. 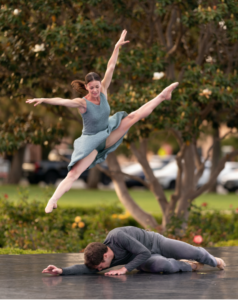 “Kindred,” by Island Moving Company director Miki Ohlsen, is a sort of Romeo and Juliet tale that features meltingly exquisite partnering by IMC dancers Katie Moorhead and Greg Tyndall. The pair join in fluid lifts and tender embraces, yet some force keeps pushing them apart, their expressive faces registering anguish. In fact, there’s a tad too much angst, in a dance that might be even stronger with a touch of restraint.

Malashock’s work displayed his signature acrobatic partnering and sweeping emotional range, from playfulness to romanticism to combativeness. Most of the music he used was contemporary classical (plus some Ravel and Janacek), which has inspired some of his most memorable dances.

“The Ride,” to music by Matthew McBane (founder of the Carlsbad Music Festival), opens in a lighthearted mood. The eight dancers lean sideways, holding their hands above their heads, wrists flexed, like flower petals. The same flower petal move occurs in a second section, but now the music sounds urgent, driven by an ominous cello line. There are kicks, a suggestion of folk dance, a diagonal scramble, a sense of something at stake. I wanted one more section, a kind of resolution, though of course a lack of resolution is truer to life. 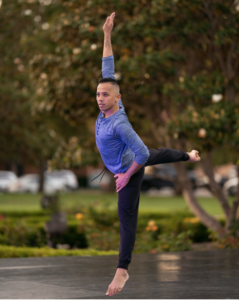 The duet that opens “Just a Phase” is full of giggly clowning; Natalia Hill and Jeremiah Jenkins even tickle each other. A palette of moods, the piece moves into intense slashes through space in a solo by Viernes; taut, intertwined partnering that feels both supportive and combative by Hill and Lauren Christie; and a tender, romantic pas de deux for Jenkins and Joseph Lister, with lovely bits of long-limbed unison. 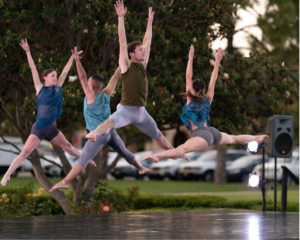 In “Swells,” Malashock gets 12 dancers—six of his own and six from Island Moving Company—doing diagonal traveling and leaping on a smallish stage, a feat in itself. In a comic central section, three men cavort to impress three women, who stand like bored fashion models. Eventually each woman pairs up with a man for a high-legged partner dance, but it wasn’t clear to me what made them finally succumb to the men’s charms. Maybe the fun bit where one person extended his/her leg to the side, and the other scurried backwards under it?