Set in a world where opportunity comes with conditions and a VHS tape can be a lifeline to survival, Makasha Copeland’s Extreme Home Makeover, running through Dec. 4 at Scripps Ranch Theatre, offers some welcome side-eye to that process while elevating one family’s desperation to simply come out standing on the other side. 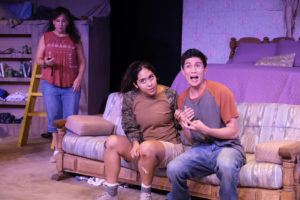 Scripted and staged as a recorded reality show audition and under the direction of Olivia Espinosa, Extreme Home Makeover is an introduction to the Vega family, Tejanos living in a mobile home in Texas. Though times have been hard for quite awhile, the family’s challenges have recently become insurmountable: Valentina Vega (Tamarin K. Ythier), her children Marco (Ramon Villa) and Lupe (Dani Diaz), and grandmother Guadalupe (Leticia Bombardier) are each coping in their own way with the sudden loss of husband and father Davíd (Javier Guerrero). The home, which has held together long enough to raise two generations, is facing some very serious damage, and the family is struggling to make ends meet with the unexpected lack of income. Seeing an opportunity to be selected for a feature on the television show Extreme Home Makeover, Valentina decides that this is the hope they’ve been waiting for, and has begun recording the audition segments as the lights come up. 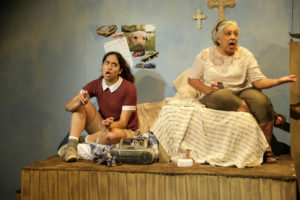 With a unique narrative device in which the lights being on becomes the equivalent of a video camera being on, the audience is given the opportunity to see not only the family as they would like to present themselves, but also the tensions and challenges that arise inadvertently as a result of filming.

As a condition of the audition, ABC requires that applicants respond to a variety of interview prompts, and it is this process that allows the audience to learn about each person on stage and begin to root for their selection. 16 year old aspiring wildlife zoologist Marco finds charm in the little things such as a lizard on the wall, a line of ants across the floor, and the way that duct tape on the linoleum protects his sister’s feet. 10 year old Lupe is wide-eyed and hopeful, eager to support and participate, but as yet unsure of how she can be a contributing member of the family. Abuela Guadalupe is skeptical about the process of unveiling her family for a major network and, as such, oftentimes staunchly defiant while other times wonderfully maternal. Matriarch Valentina carries the weight of the world on her shoulders and is desperate to portray her beloved family not necessarily as they are, but as ABC would want them to be. 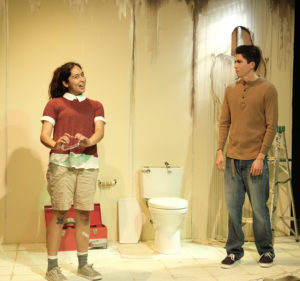 These beautifully crafted characters are a testament to the skill of the performers in navigating a script rife with subtext and richness. This isn’t light work. Villa, speaking about his hero Steve Irwin, talks passionately about his penchant to rehabilitate those (animals) who nobody else cares about. Bombardier carries just the perfect amount of gravity when she, looking straight into the camera, declares: “scarcity’s as old as we are, but we know all the tricks.” Diaz’s devastation over her last interaction with her father is palpable, even as her brother reminds her that “we have more than just his last day.” And Ythier immerses the audience in the devastating experience of telling her children that their father has been taken, suddenly and with finality.

It is through on point acting and direction choices that we join the Vegas in processing the weight of expectation, the trauma of devastating loss, and the encroachment of privacy with just a sliver of hope that it might pay off. We hear: “If you put enough duct tape on something, eventually it’ll become safe” and wonder if the duct tape in this scenario is family or hope.

A universal story about loss, grief, perseverance, and standing strong for your loved ones, Scripps Ranch Theatre’s Extreme Home Makeover is sure to leave more than a few hearts tender and achy in all of the right ways between now and Dec. 4.