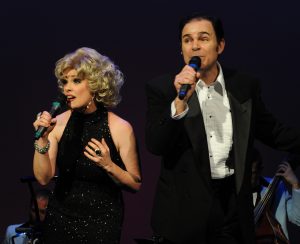 Pete ‘n Keely, making its San Diego premiere at Lamb’s Players Theatre, is a cypher. Set in a 1968 television studio, it purports to show a live broadcast of a reunion concert by a husband and wife duo who couldn’t live with each other but who are useless without each other. It’s a very thin premise, and the way it’s fleshed out is every bit as predictable as you’d expect. Its saving grace is getting to hear two talented performers sing and act their way through a bunch of standards.

Musical variety shows took a turn in 1968, with the introduction of “Laugh In,” the first television show to put Marshall McLuhan’s theory of media culture to the test.  “Laugh In’s” producers designed their show around McLuhan’s ideas of how television is an extension of our sense of touch. For most things, we want to brush up against them briefly, check in for a quick laugh, and then move on.  “Laugh In” put its hosts in tuxedos, but comedic sketches (featuring the likes of Lily Tomlin) zipped in and out, leaving audiences breathless. 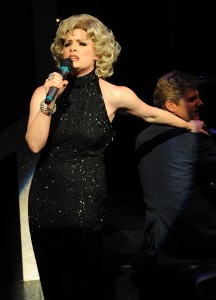 Against this background, one wonders if this out-of-character TV special where the two stars with a well-known antipathy toward each other sing standards and attempt to banter with each other and the audience is a satire.  There are some of those trimmings around the edges: a tacky-on-purpose cardboard cut-out set (by Mike Buckley) in the horrid orange, red, and aqua colors of the period; a pair of models named Carol (Kyrsten Hafso) and Meryl (Courtney Fero), whose primary function is to smile and present images of the sponsor’s product; and a smarmy music director (Brent Schindele) and worried stage manager (Patrick Duffy) who keep encouraging the audience to applaud and “show the love.”

But, director Kerry Meads’ production plays it straight, and so the half-hearted story wimps along against some fine performances by Eileen Bowman and Phil Johnson. Ms. Bowman, so good last season in Lamb’s productions of Guys and Dolls and Joe vs. the Volcano, has a gorgeous voice, more than a little way with a song, and an ability to look fabulous in Jeanne Barnes Reith’s clever and sexy costumes. Mr. Johnson is an excellent comic actor (as he showed last year in Mistakes Were Made and The Man Who Came to Dinner), and while his way with a song doesn’t match that of Ms. Bowman’s they still make a compatible pair.[php snippet=1]

Without the bite, though, the show just becomes a revue. Lamb’s loves putting on revues (Mixtape, also directed by Ms. Meads,still chugs along at the Gaslamp’s Horton Grand Theatre more than three years after its opening), but good as they are Mr. Johnson and Ms. Bowman don’t have a full evening of interesting material to sustain them.

As Peggy Lee sang during this era, “Is that all there is?”

[box] Pete ‘n Keely performs through March 3 at Lamb’s Players Theatre’s Coronado facility, located at 1142 Orange Avenue. The performance schedule is Tuesday – Thursday at 7:30pm, Friday at 8pm, Saturday at 4 and 8pm, and Sunday at 2pm. Ticket prices range from $26 – $64. See theatre information below for box office number and website.