Mozart’s prodigy humbles all of us. He started writing operas at an age when most of us had just learned to successfully ride a two-wheeled bicycle, so when the Elector of Bavaria commissioned him at age 24 to write Idomeneo for a court festivity, he had already composed 12 operas. 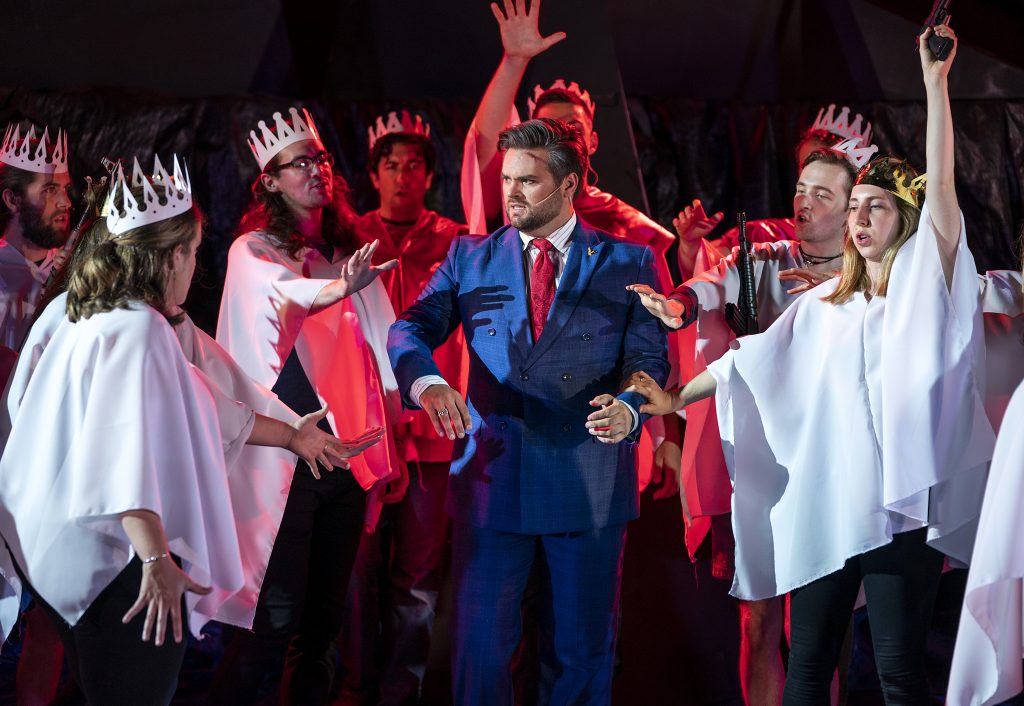 Like most of the Mozart canon apart from Don Giovanni, Idomeneo scores sat on library shelves gathering dust in the 19th century, and when the opera was revived in the early 1930s, the notoriously un-humble Richard Strauss “improved” the score by adding some of his own music to it.

Fortunately, Opera NEO produced a musically sparkling although spare production Mozart’s Idomeneo—without any Richard Strauss-helper—as part of this year’s Opera NEO Summer Opera Festival and Workshop at the outdoor Palisades Presbyterian Amphitheater in Allied Gardens. The plot of Idomeneo is a love triangle—the son of Cretan King Idomeneo, Idamante, is loved by both Elettra and the captured Trojan princess Ilia—tangled into Idomeneo’s soul-crushing sentence from the god of the sea Neptune, who saved Idomeneo from drowning in a storm at sea and then commanded to the king to slay the first person he encountered as the price for his rescue. And the first person he sees is his son, Idamante. 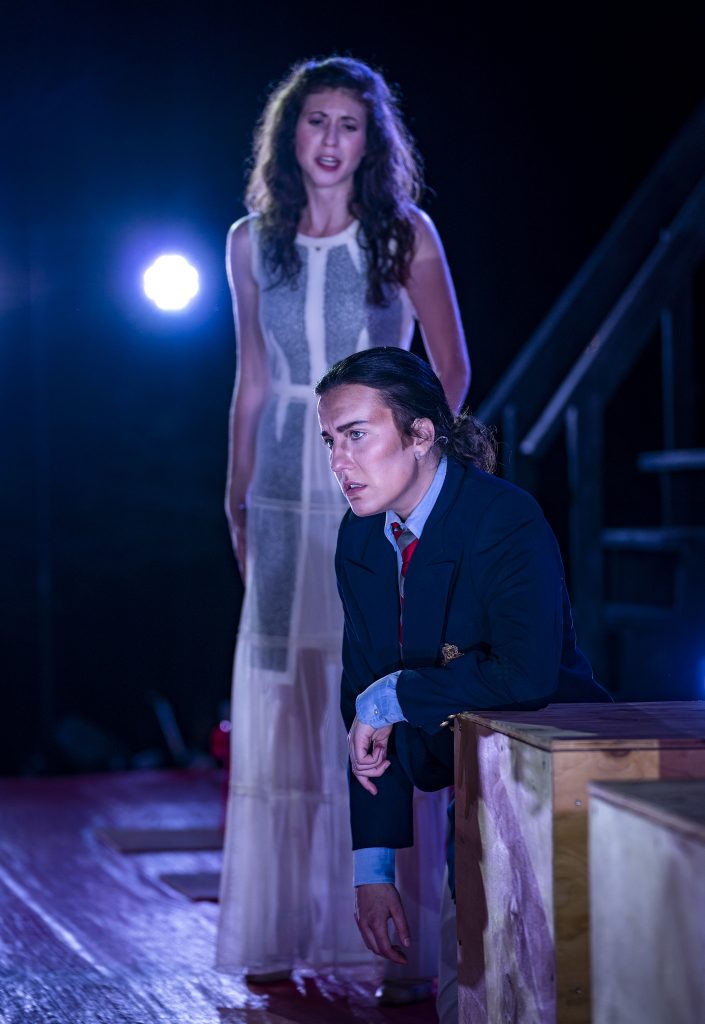 The glory of this Opera NEO production is its fine cast of young singers, who confidently imbued Mozart’s flowing, impassioned lines with grace and assurance. From Ilia’s opera-opening aria “Padre, germani, addio,” Sara Womble’s supple, warm soprano immediately won the hearts of the audience. In her boldly convincing trouser role, mezzo-soprano Stephanie Doche’s Idamante communicated the prince’s love for Ilia as well as his loyalty to his father with fervent, commanding vocal prowess. In Elettra’s final aria “D’Oreste, d’Ajace ho in seno i tormenti,” soprano Sydney Anderson unleashed a torrent of stunning vocal fireworks that had remained hidden in her smartly defined role of the scheming, self-absorbed lover who vainly attempts to win Idamante from Ilia. 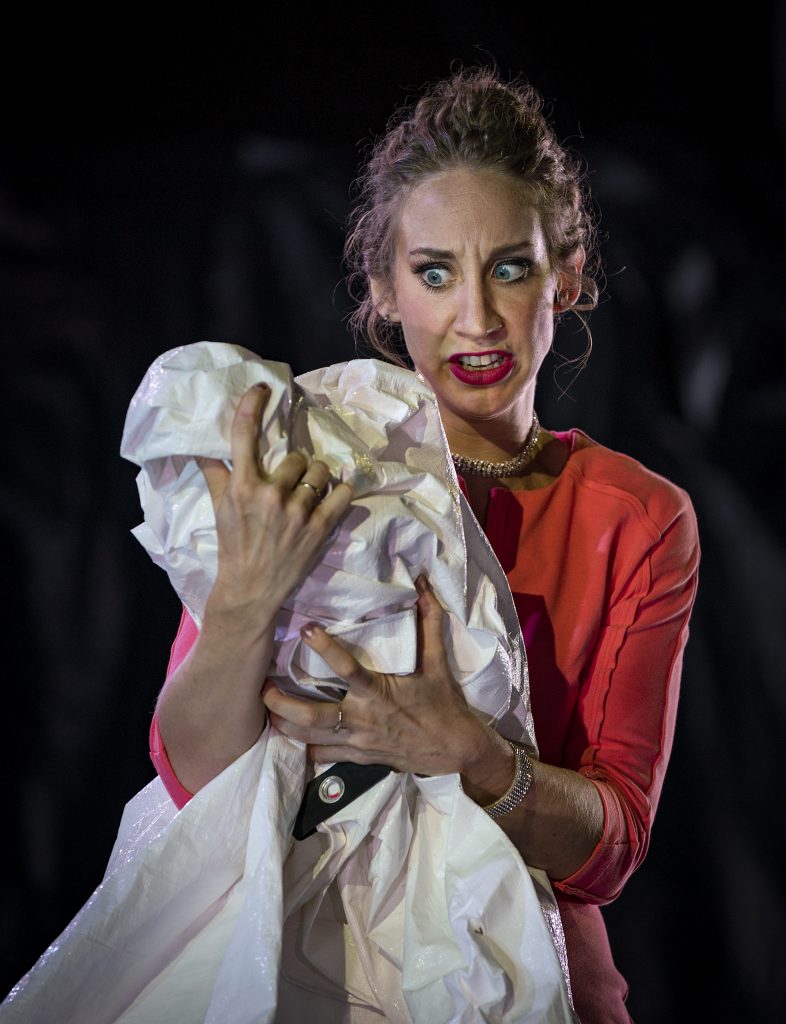 As the title character, Dane Suarez cogently balanced his acute sense of royal authority with his internal conflict over carrying out the savage will of the gods, and his hearty tenor proved more than up to the task. I kept wanting more musical depth from his interpretation, but part of that problem may be attributed to Mozart. He wrote the role for an aging tenor, Anton Raaff, and he carefully avoided a level of complexity that would have compromised Raaff. Tenor Omar Najmi soared as Arbace, the king’s advisor and physician, demonstrating the emotional vibrancy that drives his splendid tenor instrument.

Company Artistic Director Peter Kozma took responsibility for stage direction as well as conducting the 32-member orchestra. Even if the Idomeneo story lacks the dramatic complexities of his later operas, his rich, effulgent orchestral writing in this opera easily compensates, and these instrumentalists gave a consistently robust yet polished account of Mozart’s magical score. Kudos to the strings’ keen ensemble and the beautifully sculpted woodwind choruses.

To call Mark Kanieff’s set design basic is to venture into exaggeration. The blue tarps on the stage floor usually represented the sea, and the black tarps covering everything else represented the royal chambers, the royal garden, and Neptune’s temple. I did like the pyramid-shaped obelisks that suggested the composer’s era, and one very moveable pyramid that became a storm-tossed ship at sea. With so little scenery upon which to focus, we were forced to focus on the singers, and Kozma plotted their movement and stage placement judiciously. In the great third act quartet “Andrò, ramingo e solo,” each singer was given ample space to vent their conflicting emotional torments while appearing united—as only Mozart can do.

Opera NEO made an excellent case for this overlooked Mozart opera, and I could see San Diego Opera staging it in grand style in Civic Theatre or presenting a more spare but clever production in the Balboa Theatre.

Opera NEO presented W. A. Mozart’s “Idomeneo, Re di Creta” as part of its Summer Opera Festival and Workshop on August 10, 2018, in the Palisades Presbyterian Amphitheatre. For this review, the August 10 performance was attended, and the opera will be repeated in the same venue on August 11, 2018.