Encountering Opera NEO’s annual Aria Marathon Sunday, July 15, at Palisades Presbyterian Church in Allied Gardens signaled that Opera NEO’s summer festival is again at hand. This marathon is a ritual that gives each singer participating in the five-week festival the opportunity to sing their best opera aria to a captive audience. 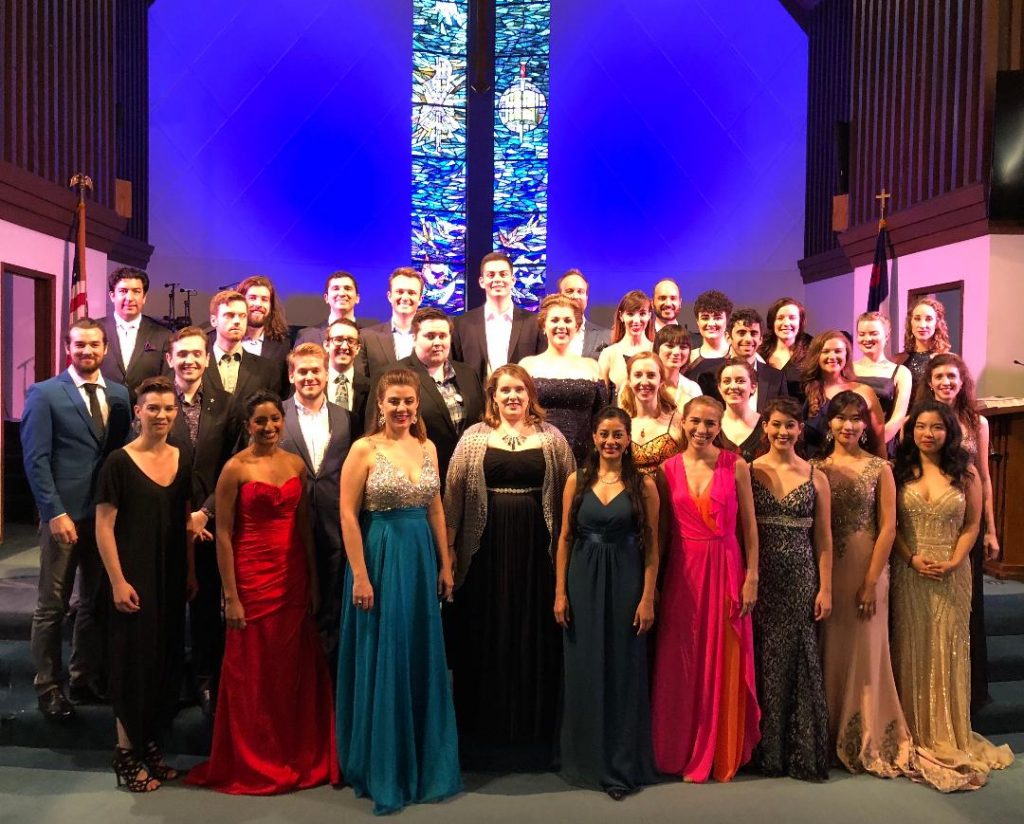 With some 30 singers on the program, Artistic Director Peter Kozma kept the pace snappy, with the exceptional singers perking up the tedium of this three-hour extravaganza. Anna-Lisa Hackett opened the program with “Ch’il bel sogno” from Puccini’s La Rondine; the dramatic verve of her ample soprano, including a powerful upper range, holds much promise for her upcoming appearance in the title role of Opera NEO’s production of Franz Lehár’s beloved operetta The Merry Widow, which opens August 2.

Baritone Jack French gave an impressive, dramatic account of the familiar “Largo al factotum” from Rossini’s Il barbiere di Siviglia, and I would place this student’s refined, articulate, yet exuberant Rossini interpretation on the level of any I have heard in the best opera houses. French will also appear in the upcoming The Merry Widow.

Two seasons ago in Opera NEO’s Don Giovanni tenor Omar Najmi sang a persuasive Don Ottavio, so it was a pleasure to hear him so passionate in Lensky’s big aria from Tchaikovsky’s Eugene Onegin. Najmi’s tenor has a darker, almost baritonal quality to it, a welcome contrast to the bright, Italianate color to which most tenors aspire.

Countertenor Bryce McClendon will sing Arsace, one of Partenope’s lead roles. On this program, he was one of only three singers who chose arias from the 20th century repertory, and his “Dawn, still darkness” from Jonathan Dove’s recent Flight projected the drama of this aria with chilling intensity. Although he handled its fioritura with skill and finesse, his interpretation transcended mere technical confidence. Ned Rorem’s 2006 opera Our Town has found greater welcome with university opera departments than with major opera houses, but the fine aria “Take Me Back” from this version of the Wilder play everyone knows by heart received a spectacular performance by soprano Sydney Anderson, who fearlessly pursued the composer’s trademark asymmetrical themes with uncanny verve. Anderson will sing Elettra in Mozart’s Idomeneo.

Tenor Blair Remmers, one of the leads in Opera NEO’s amazing 2017 production of Gluck’s Armide, confidently sang “Here I stand” from Stravinsky’s The Rake’s Progress. Unfazed by the composer’s angular declamation, his warm, generous tone clearly communicated both the text and his character’s state of mind. Remmers will appear in both The Merry Widow and Idomeneo. San Diego native Sarabeth Belon easily subdued Richard Strauss’s athletic declamation in the aria “Sein wir wieder gut” from his Ariadne auf Naxos, a style that flattered her vibrant mezzo-soprano. Belon will appear as Armindo in Handel’s Partenope.

Kelly Birch, another powerful mezzo-soprano, displayed her agility and sprightly articulation in “Iris, Hence Away” from Handel’s Semele; appropriately, she will sing Rosmira in Handel’s Partenope for Opera NEO. Korean soprano HaYoung Jung gave a touching, compelling account of Michaela’s aria “Je dis que rien” from Bizet’s Carmen, and will add her gleaming voice to The Merry Widow production. Soprano Emily Baker will sing Praskowia in Opera NEO’s The Merry Widow, and from her stylish, animated account of “Klänge der Heimat” from another beloved operetta, Die Fledermaus, we can expect a scintillating performance.

These singers enjoyed the luxury of a team of superlative accompanists: company Music Director Korey Barrett, Tessa Hartle, Elden Little, and Brendon Shapiro. In a truly egalitarian world, they would deserve their own glowing review. But opera is about singers! However, allow me to applaud Barrett’s astonishing ability to insinuate robust, colorful orchestral textures from a mere keyboard instrument and Hartle’s sparkling, nuanced articulation that almost tempted me to ignore the singer and just listen to her!