Opera NEO opened its Summer Opera Festival Sunday with its traditional Opera Marathon, a group recital that gives every singer participating in the festival the opportunity to perform their favorite opera aria. After a brave but reduced 2020 season online, Opera NEO—like other San Diego performing arts organizations—was eager to return to live performance. And the larger than usual audience present in the sanctuary of Palisades Presbyterian Church in Allied Gardens confirmed the company’s enthusiasm. 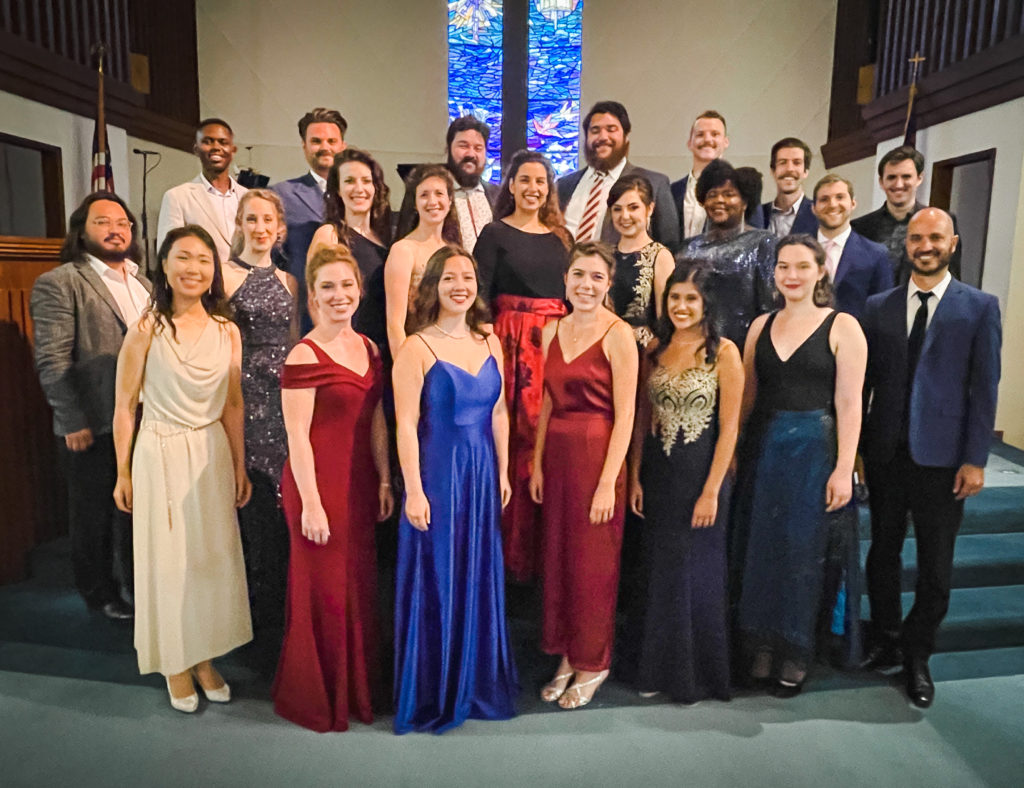 Although this marathon can become an endurance test for listeners, its primary virtue is the breadth of repertory presented, from High Baroque to 20th Century and every school in between. Since only a few of Sunday’s selections fell into the category of chestnuts, much worthy music from seldom performed operas enjoyed a welcome moment in the sun. Baritone Evan Cooper, for example, suavely offered the fey Weltschmerz of Max’s aria “Mein Sehnen, mein Wähnen” from Erich Krongold’s Die tote Stadt, and soprano Juliet Schlefer gave a poignant, vocally assured interpretation of Emily’s Aria from Ned Rorem’s 2005 Our Town.

I doubt I will ever have an opportunity to experience Albert Lortzing’s Der Wildschütz, but baritone Jeffrey Goldberg gave a rousing, full-throated account of “Heiterkeit und Frölichkeit” from that 1842 comic opera. Baritone Andres Cassante opened the program with “Nel mondo e nell’ abisso” from Handel’s Tamerlano. Given the current resurgence of Handel opera productions both here and in Europe, I may indeed find myself with a ticket to a production of Tamerlano, but Cassante’s fiery performance and brilliant execution of this aria’s daunting fioritura will still hold a vivid place in my memory.

Off course, familiar repertory was not banished—thank goodness—and Sunday’s audience was thrilled with tenor Dane Suarez’s “Non piangere Liù” from Puccini’s Turandot. With Suarez’s opening phrase, the emotional quotient of the room soared, and the intensity of his grandly arched phrases and opulent sonority momentarily transformed the modest Protestant chancel into a lavish opera set adorned with chinoiserie in riotous colors. Of course, the audience was primed for Suarerz’s high octane Puccini performance because he followed tenor Jared Lesa’s vocally glorious and emotionally extravagant “Winterstürme” from Wagner’s first Ring Cycle opera Die Walküre.

In addition to the program’s vocal artistry, Opera NEO’s three pianists provided nonpareil collaboration accompanying the singers: Korey Barrett, Kihwa Kim, and Joseph Bozich. Keyboard reductions of dense orchestral scores provide some of the most difficult music for the piano ever written, and these musicians met their challenges with finesse and a tangible sense of generous support for these young singers.

Opera NEO’s tenth anniversary season opens with Mozart’s Le Nozze di Figaro on August 6 and Handel’s Serse on August 13, each presented at the Palisades Amphitheater. A complete performance schedule is available on the company’s website.