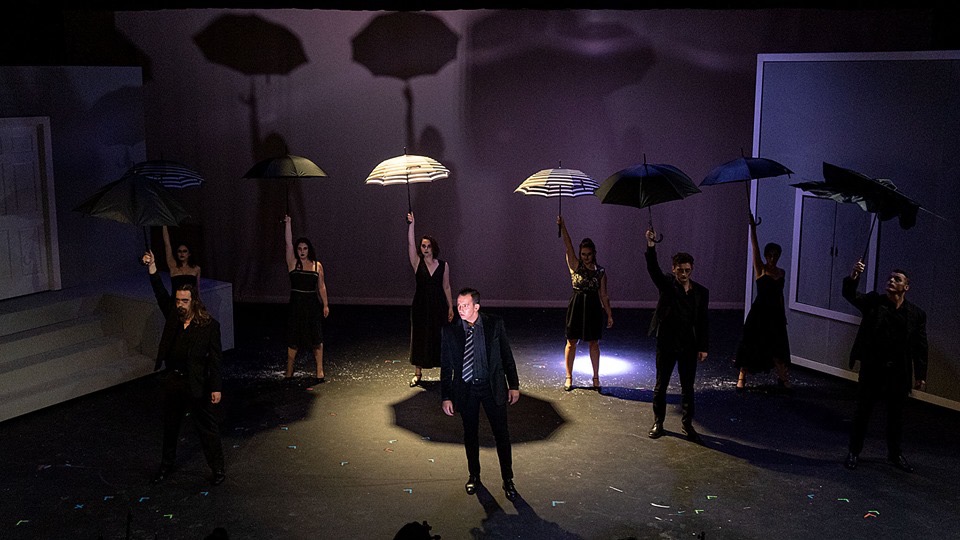 Saturday, August 8, Opera NEO revived and reinvented its cabaret night, a traditional festivity held the week before the opening of its annual summer festival, online. Nearly every aspect of the popular cabaret night at the Encinitas Public Library—walking your plate through the sumptuous dinner buffet line, sitting down to a cozy table of longtime opera friends or just-met NEO aficionados, and a stage filled with clever duets and vivacious ensembles from operetta and musical theater—is verboten during the current pandemic.

For Saturday’s online cabaret, company director Peter Kozma and his crew put together a dozen solo performances, each recorded at home by singers from the company who are also working on Opera NEO’s online presentation of Mozart’s The Magic Flute to be aired later this week. The particular advantage of this format proved to be the short interview each singer gave before their performance, allowing each member of the audience—sitting at home watching their Zoom screen—to acquire both a sense of who the singer actually is in addition to the persona presented in their song.

The cabaret’s range of songs encompassed both high camp and searing emotional drama, but the level of musical performance was uniformly excellent. Opening the program with Victor Herbert’s “Art Is Calling for Me,” from his 1911 operetta The Enchantress, Alba Franco-Cancel’s bright, clear soprano made the most of this delectably camp morsel. Although the singer coyly pouts “I want to be a prima donna, donna, donna . . .,” the vocalist must already possess a prima donna technique to navigate Herbert’s clever vocal flourishes. Franco-Castel’s smart, deftly arch phrasing and splashy cadenza at the song’s climax proved she has technique to burn.  Last season’s lauded but aptly anguished Eugene Onegin, baritone Luke Harnish, delivered his more relaxed, gentle side in “Joey, Joey, Joey,” from the rarely revived Frank Loesser musical Most Happy Fella. It proved a fine choice to display his burnished baritonal croon.

No stranger to camp high or low, Leonard Bernstein gave female vocalists a 24-carat showpiece in his aria “Glitter and Be Gay.” A magic moment in his operetta (opera?) Candide, first performed in 1956, a time when earnest midwesterners failed to catch Bernstein’s double enterdre in the title, nor did most of the country know that the popular maestro/composer himself was gay. Soprano Danielle Bavli traversed the aria’s complex emotional and musical landscape confidently, filling its longer lines with languorous intensity and conquering its gratuitous fioritura with gleaming resilience. We are not at all surprised that Kozma has assigned her the “Queen of the Night” aria in his upcoming Magic Flute.

Soprano Sara Womble has graced the Opera NEO stage in recent seasons and returns this year—virtually, of course—as Pamina in The Magic Flute. Her dulcet tone and ability to subdue composer William Bolcom’s vocal calisthenics in his clever cabaret song “Amor” again displayed her witty, sophisticated prowess. Mary Henriquez’s crisp yet knowing declamation in Kurt Weil’s “I’m a Stranger Here Myself,” from the 1943 One Touch of Venus brought welcome fresh repertory to this program.

Joseph Trumbo gave an earnest but polished account of “The Impossible Dream” from Man of La Mancha, a song piano bar crooners ceaselessly cover. Although he treated most of its phrases with aptly understated parlando, he could not resist belting a bravura final cadence.

A piano major as well as a voice major, Paul Leland fearlessly and suavely accompanied himself as he nailed the unrelenting lines of Stephen Sondheim’s “Everybody Says Don’t” from Anyone Can Whistle. I would suggest that the bass Paul Leland should ask the accompanist Paul Leland to pull back his dynamic level and allow the vocal line to be the most important part of the song. For the record, Paul Leland was Paul Leland Hill performing the role of Sylvano in Opera NEO’s Calisto production last season.

Tenor Will Fishwick’s compelling, profound interpretation of “Words Fail” from the Pasek and Paul 2015 musical Dear Evan Hansen took a highly entertaining program to another level. Beyond the young singer’s bright, powerful tenor and stellar declamation at every dynamic level, his unflinching emotional probing of this confessional, introspective song took my breath away. Few of the accompanists were credited on this program, an unfortunate oversight, but Fishwick was a touching exception: his father Wesley Fishwick provided elegantly tempered collaboration at the piano.

Although Dave Malloy’s 2012 Natasha, Pierre and the Great Comet of 1812 had escaped my radar completely, two singers on the program chose selections from this recent musical. Soprano Emily Baker caressed the gentle lines of “No One Else,” and baritone Nick Kreider probed rich introspective depths in “Dust and Ashes.” Soprano Juliet Schlefer gave a bravura account of “Much More” from that evergreen 1960 Tom Jones and Harvey Schmidt musical The Fantasticks. In “When Did I Fall in Love?”  a song from Jerry Bock’s Fiorello! that appears to aspire to opera rather than musical theater, soprano Michele Navarro-Currenti touched our hearts with searing honesty.

Opera NEO’s completely virtual performance of Mozart’s The Magic Flute in four installments opens Saturday, August 15, at 6:00 p.m., followed by three additional segments on a schedule TBA. Check the Opera NEO website (www.operaneo.com) for instructions on how to access this new production of one of Mozart’s finest and brightest stage works!