Donja Love’s play, One in Two, intends to be disturbing – and it is. According to a 2016 report from the Centers for Disease Control and Prevention, one in two Black gay men (or MSM, which stands for Men who have Sex with Men) will be infected with HIV. That compares to a lifetime risk of one in ninety-nine for the population as a whole. MSMs have an overall rate of one in six, with white men having a rate of one in eleven, and Latino Men having a rate of one in four. 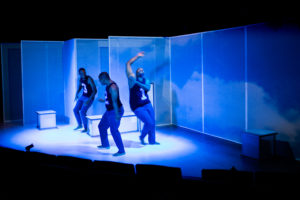 Mr. Love offers neither definitive explanations nor sermonic moralizing. He does explore in some detail why people become infected with HIV, even though there are drugs that will provide a high level of protection against the virus. And he emphasizes the seeming randomness of infection. The result is a very sober gay play in the best sense of that word. Diversionary Theatre, the nation’s third oldest LGBTQIA+ theatre company, partnering with Common Ground Theatre, has come up with a stunning way to reopen its newly remodeled space.

On a white-on-white set (designed by Victoria Petrovich, with Adam Parrocha assisting her with projections), three men wait in separate spaces. They are shirtless and of different body types. They try a variety of methods to decide which of them will be Number One, Number Two, and Number Three, but all of the methods prove to be unsatisfactory. Finally, they ask the audience to vote by applause without disclosing what the vote means. Despite to my ear there was almost no difference in applause levels for all three men, the men decided that the one in the center space (Carter Piggee) would wear a shirt with a “1” on it. Kevane La’mar Coleman, who stood in the right space, donned the number “2” shirt, and Durwood Murray took the number “3” shirt.

The set up in theory means that any of the three men could end up wearing Number One at a given performance. Given that these actors are very different people, different arrangements of the numbers would surely produce a different dynamic. Much as I was impressed by the play, I would find it emotionally difficult to see this play with another arrangement of the cast. Perhaps others will choose to return.

After the numbers are assigned, the play focuses on Donté, the name given Number 1. There are stories told among the three men, stories of growing up, stories of hooking up, silly stories, like the name you gave your penis. Serious stories, too, like how the boyfriend left or how the mom stayed true. Some of these stories are particular to an HIV diagnosis, some are more universal. Seventy-five minutes of this play seems like an eternity and also flies by.

Director Delicia Turner Sonnenberg has done much fine work in San Diego. Her work in this production ranks with her finest. The best thing she does is keep it honest, because that’s what hits home. Theatre at its most affecting is onstage at Diversionary Theatre until October 24.