Forbidden Broadway is the generic title for a series of Off-Broadway performances written by Gerard Alessandrini. The series focused on spoofing current Broadway shows and provided a lot of laughs to New York theatre fans who may have seen them. 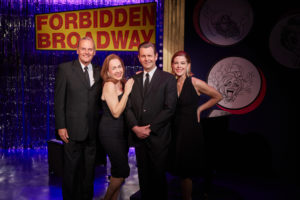 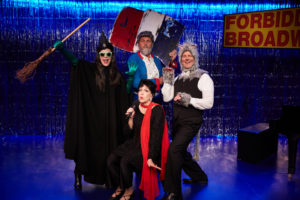 As this is a “greatest hits” show, there is a fair amount of what might be called “classic” material mixed in with sketches from somewhat more contemporary Broadway hits (though, even most of those have been running for a while). The single show I didn’t “get” right away was Once, and that one revealed itself quickly enough.

The saddest bits were about “one-hit” stars: Andrea McArdle, who was still playing “Annie” after turning thirty, and Ben Platt, who had trouble finding work after portraying “Dear Even Hansen” both on stage and in the film.

The funniest bits, to my mind, were ones where Mr. Alessandrini addressed theatrical controversies: for example, how the voice sounds heavily amplified versus how it sounds unamplified and “belted” (a la Ethel Merman). Or, the trend to dress up actors as animals, say, for instance, in Cats or The Lion King. Cats suffers the most derision, probably because its original cast played the show in very over-the-top fashion.

By the way, I saw a production of Cats at Moonlight Stage that made a much better argument for its place in the musical theatre canon than what I had come to expect from the original version.

The most poignant number dealt with theatre as a business and how actors had to be careful about how they were cast and who cast them, particularly in a number set to the opening of Fidler on the Roof called “Ambition.” It made me concerned that these fine performers might worry that they’re slumming in suburban Solana Beach.

Maybe not. After all, “There’s no business like show business,” as Forbidden Broadway’s sketches amply illustrate.