Dystopia, drama, and something sinister underlie Lucy Kirkwood’s play The Children, directed by Kim Strassburger and running through December 4 at the Moxie Theatre. 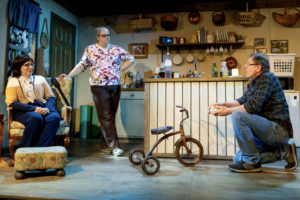 Hailed as an eco-thriller drama, this San Diego premiere stars Catalina Maynard as Rose, Vanessa Dinning as Hazel, and Neil McDonald as Robin. Taking place 6 months after a disastrous nuclear event and tsunami at a seaside power station, the audience meets the aforementioned trio of retired nuclear engineers – couple Hazel and Robin, and unexpected guest Rose – as they find themselves together for the first time in years. However, as the script begins to peel back the layers of their past history together, cracks materialize in the civility… Rose has arrived with an unexpected request that pushes all of the boundaries, after all. 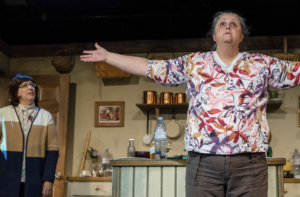 All three actors in this production are exceptional and, while each has their own moments to shine individually, it is their togetherness that builds the tension of this show. That said, I found Dinning’s Hazel to be highly relatable. The character is written to be perceptive and suspicious, but also comfortable and accommodating. She is effective to a fault, moving with physical confidence and eyes that are ever-alert and watchful, but also knows her place in the world that she inhabits: namely, she is a mother/grandmother/homemaker in a post-apocalyptic space. Even as Maynard’s Rose is shown to have ambitions in arriving beyond a simple conversation, Dinning maintains a facade of pleasant courtesy throughout the show until she simply cannot anymore.

On the other side of the coin, Maynard carries a quiet stillness, which ultimately reveals itself as a series of carefully buried secrets. The contrast between the two women is stark: Dinning’s Hazel is health-conscious, hospitable, and the picture of motherly martyrdom, whereas Maynard’s Rose is more self-affected and brings with her a hidden agenda. Their forced and false camaraderie and the way that they trip over one another in demonstration of courtesy serves to raise the stakes as the scenes progress. McDonald fills out the trio, jovial and increasingly belligerent (and candid) as the play progresses, and ultimately the captain of his own ship, even though he has only begun to realize said ship exists. 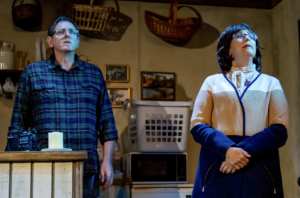 And thus the 90-minute, no-intermission play keeps the audience attentive through the end. The three characters orbit each other in a polyphonous conversation with increasing depth until the truths simply have nowhere else to go. Among them are the quippy: “I’m sorry; I must have remembered my entire life wrong” and Rose’s description of Hazel as “the woman who holds up the world” and a “giantess,”  intended without any malice but rather in reflection. And the Finale, while not entirely unexpected,  is bound to be a test for each character in a different way.

While some mental gymnastics may be required to imagine a complex character piece at a secluded British cottage in a dystopian post-nuclear disaster world, Moxie has risen to the occasion of actualizing just that. It’s worth a trip to see The Children, running now through Dec. 4.