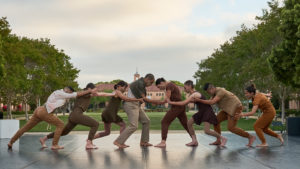 Two “tribes”—one dressed in brown, the other in green—exchange wary glances. Using wooden cubes, they stake out their territory and line up, facing off.  A moment later, a man ventures out from the four-person greens, a woman from the browns. To music with a waltz tempo, they explore lyrical partnering.

How do we respond to someone we perceive as “other?” With curiosity or fear? That question feels urgent during this “era of great moral awakening,” as I recently heard it described by Rabbi Sharon Brous. While religious and other thought leaders are offering intellectual frameworks for confronting racism, another mode of understanding—through the language of image and emotion—comes from artists. 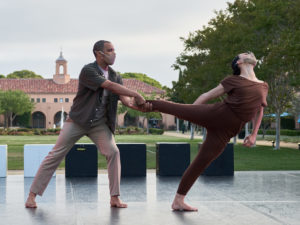 “The Bridge,” an evening-length dance that premiered at Liberty Station last weekend, was co-created by choreographers John Malashock and Tristian Griffin. Their partnership spans geography and generations: Malashock has had his San Diego company since 1988. Griffin graduated from college just seven years ago and spent several years dancing with Garth Fagan and other major companies before creating his Tristian Griffin Dance Company in Kansas City in 2019.

The collaboration also spans ethnicity. Malashock, who’s white and Jewish, and Griffin, who’s Black, both come from groups that know the tragic cost of labeling an entire people as “other.”

In “The Bridge,” they tell a story in eight sections, titled “The Divide,” “Clash,” etc. The story itself is overly simplistic. The wooden cubes, painted black or white, define individual and group boundaries, and are ultimately dismantled. And the final hopeful “Reaching Across the Aisle,” with dancers weaving past each other as if circling a May pole, comes as no surprise. 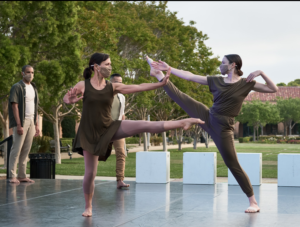 Still, the dancing by the eight-person cast is lovely. Griffin and a member of his company, Caroline Dahm, both possessed of long-limbed grace, do trust-filled partnering—she leaps onto his back, and he’s always got her. Of the strong Malashock regulars, Christine Marshall is a particular treat, with her sharp-edged balances.

The movement palette includes some Malashock signatures: acrobatic partnering, though with faces separated (everyone’s wearing masks); and loose-jointed leg swings that strike me as a legacy of Malashock’s years dancing with Twyla Tharp.

There’s also plenty that feels new. I’ve never noticed fingers so much—Lauren Christie reaches up with her fingers splayed, silhouetted against the sky at the outdoor venue; it’s part of a thrilling, jerky solo. Justin Viernes does the same wide-fingered reach, as well as explosive leaps. 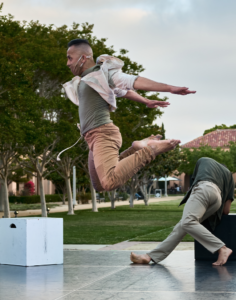 Two intriguing bits pop up throughout the piece: Tense, angular moves are suddenly interrupted by a loose full-body wave. And there’s a repeated moment when two dancers stand face-to-face, holding up their hands and touching palms.

A major production—itself a signal accomplishment during this pandemic year—“The Bridge” features an original score by Philip Daniel. Daniel is a pianist, and I found the score the most memorable when a searching piano melody was laid on top of percussive synth.

Though I found the everyone-getting-along ending too pat, I appreciate Malashock and Griffin offering a vision of a future that, right now, feels impossible. As John Lennon put it: “Imagine.”

“The Bridge” was part of the Dance is in the Air Festival, presented at an outdoor stage at Liberty Station. Coming up in the festival: