When Peter Kozma, Artistic Director of San Diego’s Opera NEO company, explained to me some six months ago that his summer festival would present Mozart’s Don Giovanni as its main offering in August, I smiled wanly, thinking, “Well, the director of every opera company has to satisfy his major donors with their favorite operas.”

To my surprise and delight, Opera NEO’s Don Giovanni production brimmed over with the insights and creative approaches that have marked the company’s sparkling previous productions of little known Handel operas. And Kozma’s entire cast of young singers proved more than equal to the challenges of one of Mozart’s most daunting scores, something that is not always realized in the largest companies that operate on (comparatively) immense annual budgets.

So allow me to enumerate the virtues of Opera NEO’s production, starting with Kozma’s inexorable dramatic and musical pacing that kept his audience at least close to the edge of their seats the entire evening. To be honest, even a very good production of Don Giovanni usually starts off with an engaging gallop through the first act but quickly loses steam after the intermission, making the plodding second act seem as long as Richard Wagner’s Ring cycle. 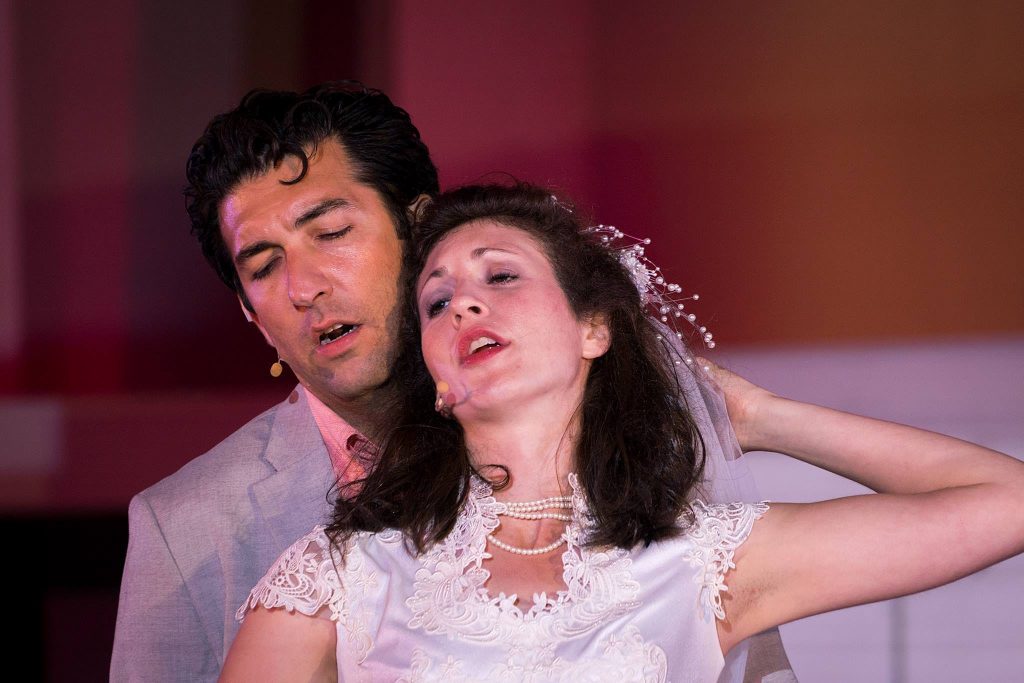 Opera NEO exploited the advantage of the Palisades Amphitheatre’s intimate scale, where the front rows of the audience are practically in the orchestra, and no one is more than 30 or 40 feet away from the edge of the stage. This allowed, for example, the emotionally intimate second act scenes between Zerlina and Masetto and Donna Anna and Don Ottavio to unfold with uncommon poignance, spurred by the dramatic acumen of the singers, of course. In large houses, these scenes tend to tie up matter of factly certain loose ends of Lorenzo Da Ponte’s plot spinning, but Opera NEO pulled the audience into the spiritual and psychological distress of these characters with amazing realism.

As is his wont, Kozma updated Mozart and Da Ponte’s Don Juan story to contemporary America, where the Commendatore is a U. S. Senator. We first see him during the Overture miming a press briefing, establishing his station, influence and power. When Leporello sings his opening “Notte e giorno faticar,” he sings it into his cell phone as a complaint to some unseen colleague. Later in the opera, when Don Giovanni is dining alone, instead of sitting behind a table laden with platters of food, he waits on the staircase for Leporello to bring him a plastic bag filled with individual boxes of Chinese take-out, which the Don casually consumes with chopsticks, of course. And when he is taken off to Hell at the opera’s conclusion, the demons that carry him away are the same members of the press corps he addressed during the Overture!

While there are certainly many ways to play the title character, Bernardo Bermudez’s take on the rake proved more nuanced than most. For example, in the early scenes Bermudez wooed the young peasant girl Zerlina with genuine affection and the dulcet edge of his ample baritone, rather than the thinly disguised predatory deception of many Don Giovannis. He cajoled his exasperated servant Leporello, played with unusual sophistication by Christopher Edwards, more with camaraderie than with sheer command and bluster. On the other hand, Bermudez summoned chilling menace and a gruff vocal edge to his “Fin ch’han dal vino” aria, in which he aticipates more conquests as his party guests dance and imbibe freely. Bermudez gave his character range and credibility, in spite of the Don’s monochromatic reputation.

Anna-Lisa Hackett’s Donna Anna Donna won me over from the start, sporting a creamy soprano mid-range that soared effortlessly into supple, substantive coloratura territory as it climbed. Her aria “Or sai chi l’onore” bridled with passion, yet her “Non mi dir” showed great compassion and vulnerability. Her youthful Donna Anna reacted to crises with surprising but convincing depth. 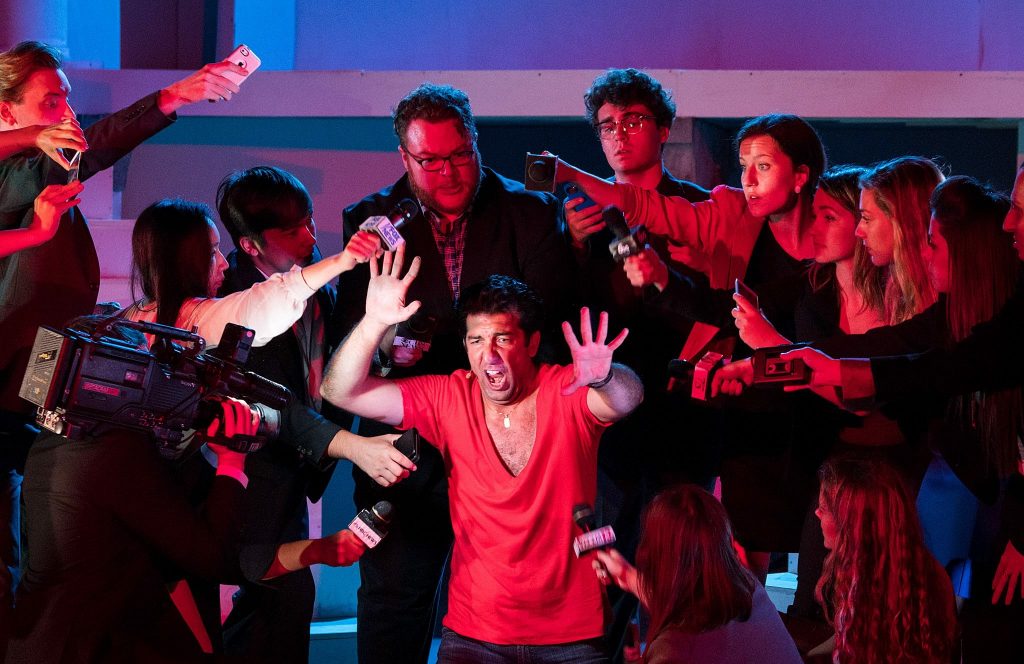 Edwards’ warm, supple baritone suited Leporello admirably, and his deftly detailed account of the famous “Catalogue Aria” made its well-worn humor sound fresh and amusing. At first, soprano Kelsey Betzelberger’s Donna Elvira appeared foolioshly desperate, stumbling about the stage pulling a cheap roller bag behind her. But once Betzelberger encountered the lover who married her and quickly abandonned her, she focused dramatically and vocally in a clear-eyed campaign to bring the Don to justice, albeit with a few detours along the way.

Sara Wombie’s light, supple soprano worked well for Zerlina, as did her volatile emotional vocabulary. She tended Masetto’s bruised ego and bruised body tenderly in her arias “Batti, batti” and “Vedrai, carino.” Darren Drone’s robust baritone with its dusky vocal hue easily defined Masetto’s social standing and role in the plot, but he did his best to tone down Leporello’s thuggish qualities, highlighting instead his canny distrust of the suave Don.

Joseph Flaxman gave appropriate authority to the Commendatore/Senator, although the sound team’s decision to add reverb to his voice from the grave was a cheap shot. As we noted in Opera NEO’s The Fairy Queen production, Flaxman’s baritone connotes a certain gravitas on its own, and he provided that necessary dimension here in spades.

Omar Najmi, the opera’s sole tenor, gave Don Ottavio a more sympathetic stance, especially in his solicitude for Donna Anna, even as she distances herself from his concern as the opera unfolds. His gorgeous “Il mio tesoro” came from his compassion, unlike the impression that some less involved tenors who essay this role—they seem simply to be waiting around to sing their showcase aria.

Although the chorus does not have a crucial role in this opera, Chorus Master Yewon Lee trained the singers well. Since most of the sixteen chorus members were principals in last week’s The Fairy Queen production, it proved a hearty, energetic ensemble. 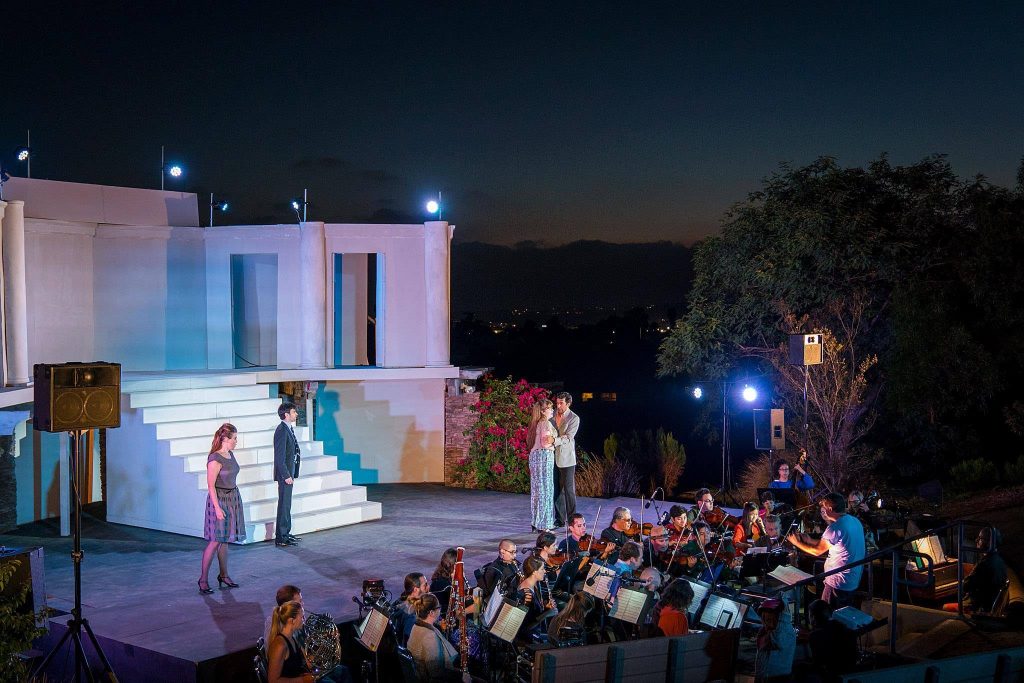 Opera NEO’s set, designed and built by Josh Shaw, had an Elizabethan spareness to it—two levels, with wide, movable staircases to provide access to the upper level. Whether dank graveyard or sumptuous ballroom, every detail and decoration that would signify such places were left to the audience’s imagination—and it worked like a charm. Stage Director Kozma, assisted by Margaret Jumonville and Azalea Laredo, used his space wisely, and his crowd scenes bustled with energy without the slightest confusion.

Mozart can be pretty merciless for a pick-up orchestra, but Kozma’s 35 instrumentalists gave a well-disciplined, even exuberant account of the rich score, whose myriad details and subtle counter melodies stood out with unusual clarity since those of us in the first several rows of the audience felt we were actually in the orchestra. Kudos to the brass choir and upper strings for consistently suave, precise, and sensitive playing. As I mentioned at the ouset, Kozma’s direction kept every aspect of the performance moving forward with unflinching confidence and focus.

Since so much of Don Giovanni’s action takes place at night—even outdoors at night—staging it in the outdoor Palisades Amphitheatre proved particularly felicitous. With no shell to push the sound towards the audience, this venue requires modest amplification, and Sound Engineer Steve Rarick supplied it judiciously, keeping superb balance between the singers and the orchestra throughout the opera. That is, of course, no small feat.

This performance on Saturday, August 14, 2016, at the Palisades Amphitheatre, 6301 Birchwood, San Diego,  brought the 2016 Opera NEO Summer Opera Festival and Workshop to a close, but San Diegans can look forward to a few Opera NEO recitals scattered throught the upcoming months before summer of 2017 rolls around.