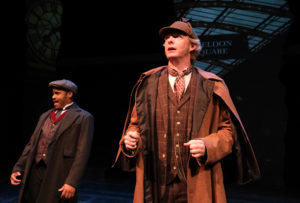 Ken Ludwig is one of the most prolific of contemporary playwrights. His farce, Lend Me a Tenor (1986), touched off a writing career that Mr. Ludwig estimates produces one new work per year. He has been particularly interested in the character of Sherlock Holmes, who stars in two plays, The Game’s Afoot (2012) and Baskerville: A Sherlock Holmes Mystery (2015). The play features more than 40 characters played by five actors. This device was not a new one: a theatrical adaptation of Alfred Hitchcock’s film, The 39 Steps was produced as a four-character play in 2005. Baskerville also has a history in San Diego, as The Old Globe gave it one of its early (2015) productions as a five-character play.

Lamb’s had a hit with a production of The 39 Steps, so the similarity of a small cast Baskerville must have been appealing. Unfortunately actor Manny Fernandes was injured during rehearsals, and Michael Louis Cusimano stepped into the roles Mr. Fernandes was playing. 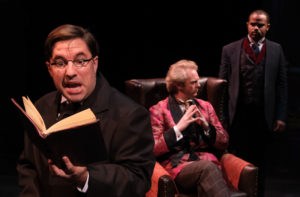 As per the Ludwig formula, Brian Mackey portrayed Sherlock Holmes, and John Wells, III portrayed Dr. Watson. The other characters were enacted by Mr. Cusimano and ensemble members Omri Schein, and Angela Chatelain Avila. Interestingly, Mr. Schein has written his own tale, The Remarkable Mr. Holmes, which played at North Coast Repertory Theatre this past season. Undoubtedly, all these works attest to the popularity Sherlock Holmes mysteries still have with audiences.

Given all these elements, why shouldn’t Lamb’s have a hit with Baskerville? The production is clearly up to this company’s high standards, particularly Christian Turner’s projection design, Nathan Peirson’s lighting design, Jemma Dutra’s costume design, and Deborah Gilmour Smyth’s sound design. Perhaps it’s the laconic feel to the pacing, led by Mr. Mackey’s approach to Holmes as almost a hands-off detective, not even that pleased with his own insights. It may have been the delayed opening and the new cast member, and that thing that might be called “company coherence,” where everyone is in sync with each other. This quality is illusive and is primarily in the hands of the director (Robert Smyth, who also holds the title of “Producing Artistic Director” and who also often shares responsibility with Ms. Gilmour Smyth, as in this production).  For instance, Mr. Schein, who has a consistent “presence” in his performances, had trouble channeling that presence into the overall effect the night I was in the audience. Perhaps it was, to a small extent, inconsistent British dialects, as coached by Jillian Frost. Perhaps it was, at least a little, mourning for the death of company member David Cochran Heath, who would have made a splendid contribution to this production in any role he chose to take on.

Certainly, nothing major went awry, and perhaps my concerns are ill founded. If you enjoy Sherlock Holmes, or if you have enjoyed past Lamb’s Players Theatre productions, I see no reason why you shouldn’t enjoy this one.

Performs Wednesdays through Saturdays at 7pm, with matinees on Wednesdays, Saturdays, and Sundays at 2pm, through November 20 and again January 3-8. Performances are held in the company’s theatre, on Orange Avenue in Downtown Coronado. Parking is available on side streets.