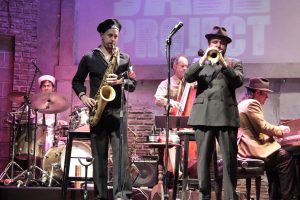 San Diego REP’s Federal Jazz Project is one long riff on San Diego in the post-World War II days when the Gaslamp was called South of Broadway, and clubs featured an eclectic mix of sounds overseen by tough guys dressed in suits. Like the neighborhood, it can be a mess. But, when the jazz gets going it’s heaven.

For sure the band is cooking, right from the start. Local jazz legend Gilbert Castellanos has assembled a tight quintet (including Irving Flores on piano, Fernando Gomez on percussion, Rob Thorsen on bass, and Ian Tordella on saxophone, along with Mr. Castellanos on trumpet) that anchors the proceedings. The band even gets its own spot, at the top of Act 2, and guest jazz artists sit in with them during this segment at each performance.

Those proceedings originate from Richard Montoya, the founder of Culture Clash, a performance troupe that has appeared often on San Diego stages. The play draws on a San Diego history that might not be taught in school rooms.  For example, did you know that the House Committee on UnAmerican Activities held a hearing here to investigate a small group of Communist sympathizers based in Logan Heights? Or that Otay’s Woodlawn Park was at one time dubbed “Nigger Hill” and was the only place in the area where African American veterans could buy a house? 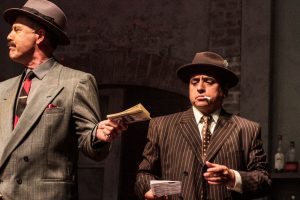 As El Poeta, Mr. Montoya parades these tantalizing tidbits as shameful factoids of local history, but his connecting story, a noir-infused romance, isn’t terribly interesting.  That story features the Kidd (Joe Hernandez-Kolski), who falls in love with a percussion tap dancer named Tijuana (Claudia Gomez). Tijuana is the sister of a classical guitarist and torch singer named San Diego (Lorraine Castellanos). The Kidd is alternately mentored and double-crossed by south of Broadway club owner Sally (Mark Pinter) and his enforcers (members of the Los Cabrones Motorcycle Club).

The plot is one-dimensional, as are the characters that inhabit it (the Kidd, San Diego, Tijuana, and an ex-military service member named Jules – who is played by Keith Jefferson and who isn’t given much to do). Mr. Montoya and Mr. Pinter have most of the acting fun, as they play multiple characters (including Mr. Pinter’s bubble-headed imitation of Lawrence Welk).  Even the explanation of the title, “Federal Jazz Project,” is murky.[php snippet=1]

What’s not at all murky is Mr. Castellanos’ music, how it works as emanating from the period while still sounding completely fresh and contemporary. The jazz is what makes “Federal Jazz Project” worthwhile.

Director Sam Woodhouse has taken a world premiere play that could only be performed in San Diego and done his best to dress it up and make it interesting.  He’s got solid support from all of his designers (though, most of the time I could have done without Victoria Petrovich’s projection design), but the nature of this beast makes his job ultimately impossible.

Even if you don’t love jazz, the music will move you. Let it.

[box] Federal Jazz Project performs at Horton Plaza’s Lyceum Stage through May 5 on Thursdays, Fridays, and Saturdays at 8pm, and Sundays at 2pm. There are also performances on some Sundays, Tuesdays, and Wednesdays at 7pm. Tickets ($31 – $52, with discounts for students, seniors, and military) may be purchased by calling the box office or online. See theatre information below for details. The theatre validates for four hours’ free parking in the Horton Plaza Garage.