The Disney Theatrical Productions tour of Frozen is sweeping into town with all of the magic and sparkle that has charmed an entire generation of children. Performances of this Tony-nominated musical will continue at Broadway San Diego’s Civic Theatre through January 29. 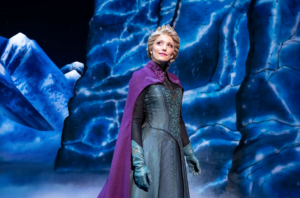 While sitting alongside children in single-digits is not always the most anticipated experience, this show may just be the exception; in fact, there may be even more wonder involved when it includes gasps and joy from the costumed youth to your right and left.

Directed by Michael Grandage, Frozen features music and lyrics by Kristen Anderson-Lopez and Robert Lopez and book by Jennifer Lee. This tour stars Caroline Bowman and Lauren Nicole Chapman as royal sisters Elsa and Anna, alongside a cast of 33 other talented performers and an additional five swings. 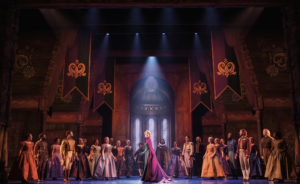 The story is well known at this point – the animated film it is based on was released nearly a decade ago – but is an adaptation of Hans Christian Andersen’s 1844 fairy tale The Snow Queen. Frozen, which takes place in the fictional realm of Arendelle, follows Elsa, a young princess with magical powers of ice and snow. When she inadvertently injures her 6 year old sister, Anna, the family decides to shutter the castle and teach Elsa to conceal her powers in order to protect everyone.

The sisters grow up separated from one another and ultimately orphaned (their parents having been lost in an accident at sea while seeking a cure for their daughter), and open up the castle only when necessary for Elsa’s coronation day. When circumstances at the coronation ball cause undue stress to the new queen, her magic finds its release, triggering a mid-year winter. Elsa flees to the nearby mountains with Anna in pursuit. Accompanying Anna on the adventure are magical snowman Olaf (puppeteer Jeremy Davis), reindeer Sven (Dan Plehal), and ice salesman Kristoff (Dominic Dorset). While there are romantic intentions presented in the story, Frozen is about how sisterly love can thaw a frozen heart. 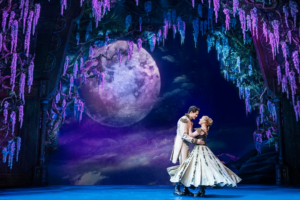 The four actors who play young/adult Elsa and young/adult Anna (Mackenzie Mercer, Bowman, Saheli Khan, Chapman) do well to establish this relationship between the two sisters. The younger performers perfectly set the scene for the audience to understand the differences in their personalities. Elsa, we learn, is more reserved and a rule follower, whereas her younger sister is a spitfire who lives life vivaciously. The playwright has done well to create these dynamics in the script, but beyond the words, Saheli Khan in particular is immediately enchanting in her rendition of Young Anna, throwing her arms out for dramatic effect and capturing hearts in the process.

Chapman picks up this baton seamlessly when we shift to a few years later. It is positively joyful to see her capture the awkwardness of a young woman who has been raised in isolation but is eager to embrace the world at large. Chapman’s chemistry and interactions with both love interests (Hans and Kristoff, played by youthful Will Savarese and charismatic Dorset) are engaging and her voice is lovely and clear. “Love is an Open Door” not only captures all of that, but gives Chapman and Savarese an opportunity to shine in partner dance work as well (designed by choreographer Rob Ashford). 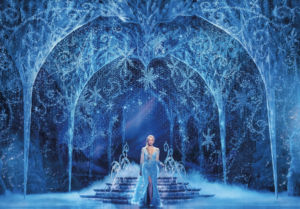 Bowman, as adult Elsa, is a powerhouse; I would happily watch her in any role. She applies exquisite vocal control in more tender pieces, and then lets loose with a dominant dynamic belt that is simply stellar, all while portraying Elsa’s arc of emotion through her face and body language.

There were countless Elsas in the audience at the show I witnessed, each dressed in sparkling gowns of their own, but of course none could compare to the costume plot crafted by designer Christopher Oram. Elsa’s luxe dupioni silk coronation costume and bejeweled snow queen gown are stunningly designed and the quick change at the end of Act I is perfectly executed to maintain the feeling of magic. The coronation ball, military costumes, and winter ensemble pieces also have a stunning drape and shape that complement the transformation of the stage to Arendelle. 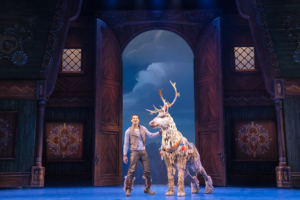 Oram is also the designer behind the deep, textured set with a carved wood grain proscenium, cozy castle interiors, vast outdoor landscapes, lichen-coated rocks, and a number of other locations, which are highlighted by special effects (Jeremy Chernick), lighting (Natasha Katz), video effects (Finn Ross) and puppets (Michael Curry). The transitions from summer Arendelle to crystallic snowflakes and ice, the pop-up beach scene from “In Summer,” and the Aurora Borealis illusions in particular are lovely. Katz’s lighting throughout the production is outstanding; the use of blues and purples, oranges, greens, and even shadows and glowing eyes help transport the audience on the emotional journey with the characters. 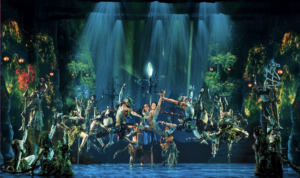 While this show features a large ensemble with beautiful and deep choral arrangements (“Vuelie,” “Queen Anointed,” and others), I found the sound balance of the talented 12-piece touring orchestra, conducted by Faith Seetoo, to be a bit disproportionate; at times towards the beginning of the show, the orchestra was amplified to a degree that made it difficult to hear the performers’ words.  That said, the balance was effectively achieved by the time Act II started with the energetic and amusing “Hygge” and was perfect in the belting quartet “Colder by the Minute.” Sound designer Peter Hylenski certainly had his work cut out for him, as the ice transitions would not be the same without the crackling noises that chase across the stage, among other key sounds throughout the production.

All in all, Frozen brings the wonder we have come to expect from Disney to life on stage, and will surely inspire a new round of San Diego theatre lovers during its two week stop at the Civic between now and Jan. 29.