We’re vaccinated. We’re masked. And we’re returning to theaters to see dance! Last week, I got to shows by two companies, Litvak Dance and Malashock Dance. Both featured work by multiple choreographers, making it a dance bonanza. 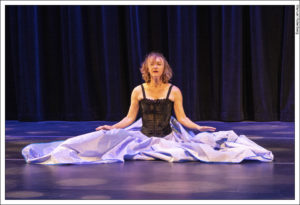 Litvak, which performed last Thursday at the JCC’s Garfield Theater, offered “Revisiting Repertory,” a program of five works from the company’s first three years. I went for my own enjoyment, not planning to review (so no notes, just my spotty memory), but the work was so strong, it has to be mentioned—especially the pieces by Litvak director Sadie Weinberg and guest artist Patricia Sandback.

Weinberg’s “The Practice of Coming Back,” a solo for April Tra, was my personal highlight of Litvak’s debut concert in 2018. It remains a jewel. Tra is an exquisite mover—sharply precise and with an emotional presence so clear, it’s as if she sheds a layer of skin in this piece, set to Ezio Bosso’s yearning “Road Signs Variations: Cross, An Hallelujah.” Weinberg also used a Bosso score, “Violin Concerto #1,” for “Another Ezio Summer,” that gets 12 dancers joyously bounding across the stage. 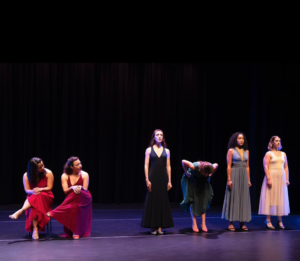 Sandback is hands-down San Diego’s wittiest dance maker, and her “Girls with Balls” is a comic triumph. The series of vignettes for eight women in party frocks includes Weinberg falling to the ground, rising, and falling again as she does battle with her voluminous skirt, Emily Miller reciting “Jabberwocky” at rocket speed (with hilarious facial expressions), and a sequence with unison folk-dance style moves to a klezmer tune. 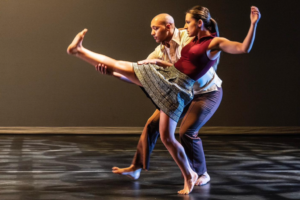 Litvak also offered work by Keith Johnson, who teaches at Cal State Long Beach, and San Francisco-based Chuck Wilt. Johnson’s duet, “Rein,” is danced with intense connection by Ashley Akhavan and Jordan Daley, to live music from violinist Kristopher Apple. In “Radiant,” by Wilt, six dancers form various groupings, often with one of the six being the odd person out.

Malashock’s “Everyday Dances,” seen on Saturday, is a program of 10 dances, each about five minutes long—which I found light for my taste. Still, it was a treat to see the latest from John Malashock and five guest choreographers.

Part of the fun was the venue, the intimate performance space at the refurbished Mingei Museum. And I mean intimate. I’ve been to plenty of shows in tiny studios, but something about the Mingei space and the powerful male dancers … the arc of an arm or leg through the air seemed to fill the whole room.

Malashock’s five of the dances reflect a range of moods. He shows his lyrical side in “Swells,” with four dancers swept as if by ocean currents into lovely arabesques and dramatic lifts, and in “After Dust,” where the dancers alternately give and receive support. “Out of Line” and the mischievous “Child’s Play” display his signature acrobatic moves. In the ritualistic “On Shaky Ground,” three men hunker in a close circle, then explode into jumps. It’s great to see these strong guys—Marcos Duran, Jeremiah Jenkins, and Justin Viernes.

Guest artists did one dance each. There’s a play of contrasts in Blythe Barton’s “I’m Here, Dual There”—quickness alternating with stillness, deep contractions with the amplitude that made dance in the Mingei space feel thrillingly immediate.

Ryan Orion Beck titled “Zugzwang” for the moment in a chess game when a player has no good moves … which seems to be where Jenkins stands with Megan Donaldson. Try as Jenkins might to provide supportive partnering in a balletic pas de deux, Donaldson, elegant on demi-pointe, responds to his longing gazes with indifference.

“Perch,” a solo choreographed and performed by Lauren Christie, shows off her strong lines and gorgeous spiraling wrists.

I’m betting Odessa Mae Uno grew up on “So You Think You Can Dance.” Like many of the dances on the television show, her “In Case We Forget” features a relationship—between Donaldson and Sebastian Eusebio Arredondo—crackling with tension. And there’s a story of some kind, as the dancers hold up their palms as if carrying something, regard each other warily, do wiggly moves, and come into tight unison. I didn’t know what it’s about, but I was hooked.

Duran’s “Neck, Knife” has terrific ingredients: a dark carnival feel with three dancers in circus-y dress; a choreography of twisty moves, fluttery hands, and off-kilter turns; an ominous score with sounds like squeaky brakes (“why the trees were murmuring” by Anahita Abbasi, performed by the La Jolla Symphony). Yet, though I can’t pinpoint why—maybe it just needed more rehearsing?—the piece didn’t cohere as a whole.