Don’t try to dissect it – people have been trying to do that since the show premiered 41 years ago! – just enjoy. The touring company of Cats has arrived at the San Diego Civic Theatre in its 8-show swing through town running through October 2, and it has brought athletic dancing, beautiful vocals, and a bunch of cat ear-wearing fans along for the ride. 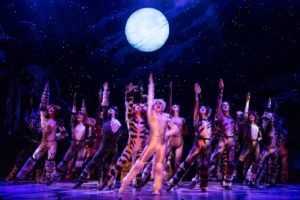 The company of the 2021-2022 national tour of CATS. Photo credit: Matthew Murphy, Murphymade.

Directed by Trevor Nunn and based on T.S. Eliot’s ‘Old Possum’s Book of Practical Cats,” Andrew Lloyd Webber’s musical tells the story of a big cat event, the Jellicle Ball, which happens once a year, presided over by a senior and revered feline, Old Deuteronomy. In this universe, cats sing and dance (and steal and act and perform magic!), and so, each year, they put those skills to good use trying to impress their venerable leader. After all, the top performance of the Jellicle Ball is granted a prize unlike any other: a trip to Heaviside Layer, or a chance to be reborn as their perfect self. As the show progresses, the audience is treated to performances by each cat as they introduce themselves. We meet Mistoffelees, Bustopher Jones, Skimbleshanks, Macavity, and others (yes, the naming conventions are explained in the script)… and voila! At the end of the evening, a winner is crowned.

If you go into the production expecting the nonsensical, you’ll likely be charmed by the show. This cast is living for the opportunity to be touring with Cats, and it shows! Clad in the quintessential fur-suggesting bodysuits, legwarmers, tails, wigs, and a thick layer of make-up (John Napier), they are captivating in the way that they own every inch of the junkyard-themed stage. The choreography (Andy Blankenbuehler, based on the original choreography by Gillian Lynne) is larger than life and highly entertaining to watch throughout the production. 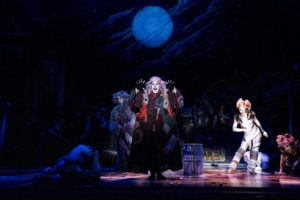 One highlight of the show comes courtesy of Rum Tum Tugger in the song named after the character; Hank Santos carries the charisma of a rock god with intention, making the character one of my favorites in the show. The tune “Mungojerrie and Rumpleteazer” is brought to life by Brian Craig Nelson and Taryn Smithson who play off of each other with such delightful spirit leaving the audience roaring with laughter and applause as they tumble and tease. Jellylorum and Asparagus, played by Allyson Duarte and John Anker Bow, are brilliant in “Gus the Theatre Cat,” one of my favorite numbers of the show; Duarte’s playful handling of Jellylorum gave me Glinda/Galinda vibes and I’d love to see her in the role someday. Furthermore, I was utterly enchanted by the sparkle and verve emanating from Michelle E. Carter in her portrayal of Jennyanddots. Carter draws the eye throughout the production with her expressiveness and sass even after wowing the house with an early tap feature. What a gem.

Oh… I mentioned earlier that this was a swing through town? In this case, swing is that operative word as, in the evening performance on the 28th, swing Rachael Haber had a chance to make her mid-show debut as Grizabella. While actor Tayler Harris primed the audience with her haunting preview of Memory just before the end of Act 1, Haber was more than ready and capable to take up the mantle (errrr… the fur?) and she delivered a rich and resonant performance when Grizabella finally arrived at the ball, earning a much deserved and prolonged applause from the captivated audience and an extra bow following the production. It was a heartwarming piece of theatre magic and I’m so glad that I was able to witness it.

Take off your logic goggles, throw a theme of your choice into the air (honoring your elders? not judging a book by its cover?), let that “moment of mystery” give way, and get ready to hear a bunch of words you don’t understand but that are accompanied by a skilled orchestra and cast high-kicking dancers. Cats is a rite of passage and there’s only a few days left before the tour is back on the road following the October 2nd performance.