Catch Me If You Can The Musical has an impressive pedigree, with Hairspray’s Mark Shainman on music, Mr. Shainman and Scott Wittman on lyrics, and multiple Tony® Award winner Terrence McNally writing the book. Yet, the show’s reception on Broadway was mixed, and it lost out in the Tony competition to The Book of Mormon. Given that “Mormon” was a phenomenon and is still running on Broadway more than ten years later, one might wonder if “Catch Me” is a hidden gem. 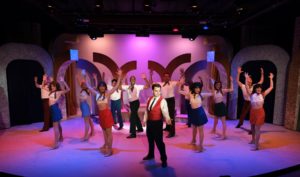 I’m glad that San Diego Musical Theatre decided to mount a production of it to open its 2022 season and to christen its new theater space. I enjoyed the production under Allison Spratt Pearce’s expert direction, but I think that the mixed assessment of the Broadway version was accurate.

The story was originally a film and was based on the autobiography of Frank Abagnale, which, itself may be of questionable veracity. It’s a good story, though, about a teenager (Beau Brians) who pulls off a series of cons in the late 1960s, including posing as a pilot, a doctor, and a lawyer (Abagnale actually passed a bar exam and when asked how he managed to do it, replied, “I studied”).

The cons attracted the attention of the FBI and Agent Carl Hanratty (Berto Fernández) took charge of a case that required him to chase after the slippery young Mr. Abagnale, who was always on the move and often changing identity. The fun part of the story is the cat-and-mouse game between the two leads. This isn’t Les Mis, though: Abagnale is no Jean Valjean and, in turn, Hanratty is nowhere near as driven as Inspector Javert. 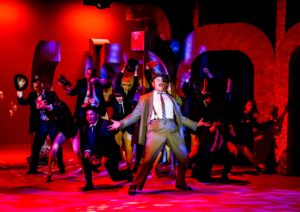 In fact, that’s an advantage for Mr. Fernández, who gets to show off what a marvelous comedian he can be. This is the most delightful role I’ve seen him play, and his performance is a major reason to see the SDMT production.

As his adversary, Mr. Brians exhibits an easy, boyish, charm, though he gets weighted down with a subplot involving his father, Frank Abagnale, Sr. (Paul Morgavo) and mother (Andrea Petsinger) There’s also a romantic entanglement with Brenda Strong (Adelaida Martínez) and her family (Ted Leib and Debra Wanger). These forays away from the con/chase and into the personal lives of the characters are likely the source of any grumping about the musical’s quality. Interestingly, the real Frank Abagnale, Jr. is still alive and working as a security consultant.

Hanratty travels lighter, with only a cadre of FBI agents (Joey Guerra, Dennis Peters, and Sutheshna Mani) as his wingmen.

Ms. Pearce has softened the casual sexism of the plot, but she can’t do much about the bevy of chorines who high kick to Xavier J. Bush’s choreography while sometimes singing, sometimes shrieking (Musical direction by Richard Dueñez Morrison, to a professionally recorded set of tracks).

Producers Erin and Gary Lewis say that the current space is a temporary one and will eventually become a performance space for productions by students in the school that they operate. It’s a comfortable space for these productions in the meantime, and I’ll anticipate the opening of the permanent one.

Catch Me If You Can runs through March 13. See it if you can.