Opera superstar Nathan Gunn’s Flying Solo, his one man show that just opened at the Lyceum Theatre, cleverly merges biography, confessional, and solo recital into a sleek 90-minute stage production. If the story of a high school wrestler from South Bend, Indiana, who makes his way to the stage of New York’s Metropolitan Opera as its leading baritone sounds like an inspirational sermon out of Parade Magazine, rest assured that Gunn’s singing elevates this homily at every turn. 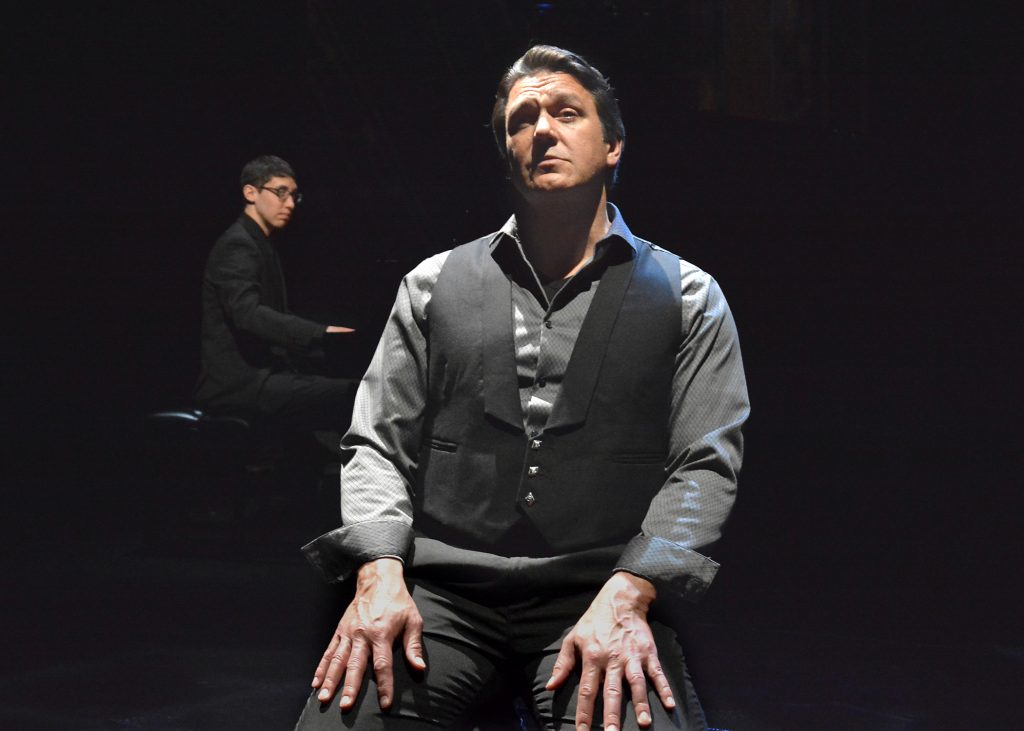 San Diego Opera audiences caught their first glimpse of Nathan Gunn in Jake Heggie’s new opera Great Scott at the Civic Theatre in May of 2016, and I recall Gunn’s vocal and dramatic prowess observing him sing the character of Riolobo in Los Angeles Opera’s 1997 production of Daniel Catán’s opera Florencia en el Amazonas.

Among the vignettes that fleshed out Gunn’s development as a singer, his recreation of a vocal lesson with the renowned opera soprano Renata Scotto splendidly captured all of the diva’s hauteur—her thick Italian accent, her imperious judgements, and her swooping pronouncements—as she overwhelmed the budding young singer. When he complained to her that he was not ready to tackle the aria “Largo al factotum” from Rossini’s The Barber of Seville, Scotto derisively suggested that perhaps he should become a mailman instead of a singer. For his Lyceum audience, he then gave a stirring account of this famous aria with its signature “Figaro, Figaro, FI-GA-RO” motif.

A certain lack of dramatic tension made the show seem longer than its 90 minutes, although Gunn’s desire to win the approval of his stern, taciturn Scottish father is a theme that surfaced sufficiently to add a soupçon of angst beneath his otherwise successfully developing musical career. When his father rides his motorcycle all night from Indiana to New York City to see his son take the Met stage on short notice in a production of Mozart’s The Magic Flute, Gunn realizes that he has won him over, especially when he looks up from the stage to the director’s box to see his leather motorcycle jacket clad father sitting between General Director Peter Gelb and the president of the Metropolitan Opera board.

Fulfilling the show’s advertising promises, Gunn sings several songs from musical theater, although that aspect of his career has been minor, to say the least. In honor of his high school stage debut, Gunn sang “Oh What a Beautiful Morning” from Oklahoma!, a performance that imbued that iconic song with a virility and sonic resonance we are unlikely to encounter ever again. Two songs from Alan Jay Lerner’s Camelot—the title song and “C’est moi”—displayed equal polish, if slightly less conviction. Gunn performed the role of Lancelot for a concert version of Camelot with the New York Philharmonic at Lincoln Center.

But Gunn touched our hearts with his melting lyricism in “Mein Sehnen, mein Wähnen” an aria from Erich Korngold’s rarely produced opera Die tote Stadt and Billy’s poignant final soliloquy from Benjamin Britten’s emotionally searing opera Billy Budd, a role he sang at the Met when Gelb gave him carte blanche to choose any opera to sing for the company.

Accompanist Michael Bagby, at the grand piano placed (too) discreetly at the back of the stage, provided Gunn sparkling, sympathetic support from the keyboard. Hershey Felder wrote and directed Flying Solo, and the work bears his trademark seamless construction and canny pacing. A master of the single person performance piece about great composers, Felder was last seen at the San Diego Repertory Theatre in his Our Great Tchaikovsky in January of 2017. Felder treads that fine line between cloying populism—did Gunn really have to twirl around the stage in a frilly apron to symbolize his mother’s support of his musical ambitions—and high art, the music of Mozart and Britten.

I could not fail to note that the Rep’s citywide advertising of Flying Solo confirmed that same squeamish attitude towards opera that Gunn described in the reactions of his South Bend friends and relatives when he revealed his plans to pursue a career in opera. The Rep ads proclaim in bold letters “songs from Camelot and Oklahoma!” and in smaller print below add “with some funny stuff from opera.” Sure. Nothing funnier than Billy Budd’s final thoughts before his execution.

Nathan Gunn in Flying Solo is presented by San Diego Repertory Theatre on the Lyceum Stage in downtown San Diego. The production runs through June 10, 2018. The evening performance of May 26 was seen for this review.