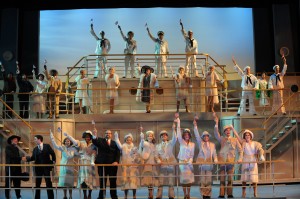 Cole Porter’s Anything Goes is one of the oldest musicals in the canon that is still being produced on a regular basis.  Premiered in 1934, it featured a terrific score overlaid on a silly tale that was perfect for Depression-era audiences looking to forget their troubles.

The tale turned out to be too silly, and Lincoln Center commissioned an update, by Timothy Crouse and John Weidman.  The two succeeded in making the story more diverting but still airy.

Airy is good for summer musicals staged outdoors, and Moonlight Stage Productions version of it doesn’t push the envelope at all in making an enjoyable evening for its audiences.

Set mostly on an ocean liner that’s finding itself a little too staid to attract passengers on the heavily traveled trans-Atlantic route, the story deals with mistaken identities, stock deals, celebrities and would-be celebrities, and marrying for money as opposed to love.  There’s a large cast of characters but I gotta say that you don’t really care much about most of them. 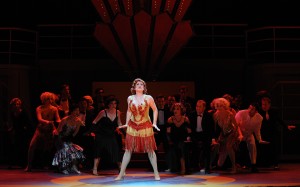 What you do care about are the songs and the production numbers, and here is the great Cole Porter displaying his wittiest brilliance.  Included in the show are some of Mr. Porter’s most delectable hits: “I Get a Kick Out of You,” “You’re the Top,” “Easy to Love,” “Friendship,” “It’s De-Lovely,” “Blow, Gabriel, Blow,” “All Through the Night,” “The Gypsy in Me,” and of course the title tune. When you have that many terrific musical numbers sung by nice voices and backed by a 16-piece orchestra (kudos to Justin Gray, music director, and Kenneth Gammie, conductor) you don’t need a whole lot else.

But, of course you do get more, in the form of dancing, especially featuring tap numbers (though, be patient, they don’t show up for a while).  Director and choreographer Jon Engstrom last staged 42nd Street, another tap show, for Moonlight, and his attractive ensemble of tappers executes the moves precisely and provides percussive accompaniment for the Porter melodies.

Singing those Porter melodies, mostly, are the leading players.  Tracy Lore portrays Reno Sweeney, a New York night club owner who has brought along some of her troupe on the crossing.  Ms. Lore shares some of the vocal qualities of the original star, Ethel Merman, but without the blaring sound that many associate with “The Merm” from her recordings.

Jeffrey Scott Parsons plays Billy Crocker, a somewhat inadvertent stowaway who is in love with debutant Hope Harcourt (Courtney Fero). Mr. Parsons displays plenty of verve and a lovely high tenor voice.  I did like him a bit better in the just-closed North Coast Rep musical, Dames at Sea, though, where he played a spoof on the kind of character he’s playing here.  There, Mr. Scott was bright but subtle; here, his performance aims for the back of the house and lands somewhere outside the theatre’s grounds. Ms. Fero also displays a lovely soprano, but there’s less verve in her acting.

The other leading player is Barry Pearl as the 13th most wanted gangster, Moonface Martin.  Mr. Pearl’s style is full of shtick, and if you like what he does you like it.  If you don’t, you don’t.

The rest of the 28-member cast is, almost predictably, variable in quality.  Mr. Engstrom’s strength seems to be in choreography, and his direction, particularly in evoking any depth of character, has less impact than his dances. But, perhaps he reasoned that audiences wouldn’t be looking for layered portrayals, and I suspect that reasoning would have been correct.

Moonlight often rents its sets, but the ones for this show were designed and built locally by N. Dixon Fish.  They provided a variety of playing spaces and set a number of different locations without becoming overly abstract. The sets were lit in utilitarian fashion by Christina L. Munich, and Bryon Anderson designed a sound scheme that picked up voices, tap shoes, and orchestra in excellent balance.

Anything Goes provides those who remember the songs a chance to stroll down memory lane and those who’ve never seen it a chance to fall in love with the work of a great theatre composer. Who could ask for anything more?  Oops, that was by George and Ira, not Cole.

[box] Moonlight Stage productions presents Anything Goes, music and lyrics by Cole Porter, original book by P. G. Woodhouse, Guy Bolton, Howard Lindsay, and Russel Crouse, new book by Timothy Crouse and John Weidman. Performances August 22 – September 8 at the Moonlight Amphitheatre in Vista. The curtain goes up a 8pm Wednesday through Sunday, though no performances on September 5 and 9. Tickets ($15-$50) are available by calling (760) 724-2110 or visiting the Moonlight Stage website.