When the eminent 19th-century French composer Camille Saint-Saëns wrote his charming and clever Carnival of the Animals, he only played it for his close friends. During his lifetime, he never played it in public or allowed his publisher to release the score because he feared that the spread of such a “light” work would diminish his standing in the musical world of his time. 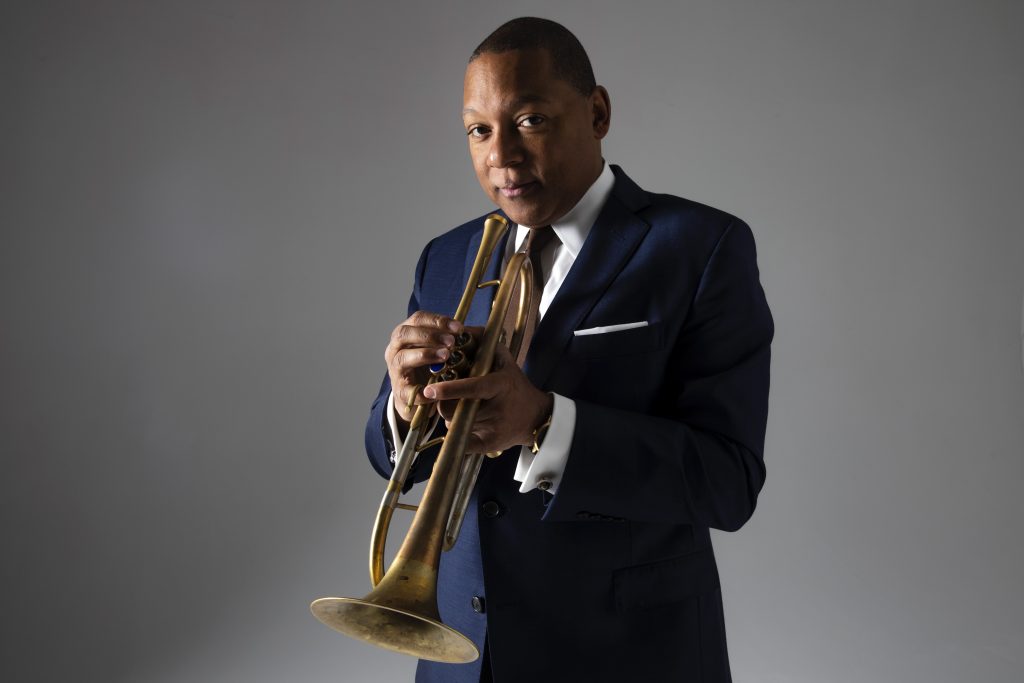 We are fortunate that Wynton Marsalis does not entertain such reticent notions. He and his elite Jazz at Lincoln Center Orchestra brought his recent composition Spaces, a ten-movement work that features one well-depicted species of the animal kingdom per movement, to San Diego’s Balboa Theatre on Wednesday, October 3, to open the La Jolla Music Society’s 50th Anniversary Season. This exuberant work for his 15-member jazz orchestra, first performed in New York in 2016, combines easily perceived animal sounds and their behavioral traits with Marsalis’ own spirited, often complex musical development and extension that brought to mind the sophisticated Third Stream tradition of Gunther Schuller and Dave Brubeck.

But however you choose to categorize Marsalis’ approach in Spaces, his music readily captivated Wednesday’s enthusiastic audience at the Balboa. In addition to his virtuoso orchestra’s invigorating performance, Marsalis benefited from a trio of contemporary dancers who amazed and entranced the audience from the outset. The combination of the lithe, athletic young dancers Lil’ Buck and Myles Yachts as well as tap dance virtuoso Jared Grimes—spurred by the inventive choreography of Damian Woetzel—mesmerized young and old alike. And unlike many a La Jolla Music Society audience, a surprising portion of this audience was comprised of students and youngsters. May this trend continue unabated! To open his piece, Marsalis chose an easy target as short, piquant squawks from the reeds signaled “Chi-Chi-Chi-Chicken.” Similarly, the dancers began with the sort of shoulder hunching and quick snaps of the head you might see youngsters pull off in a playground. But once the dancers and composer had our attention and our minds fixed on the right animal, how they amplified those simple materials demonstrated their artistry.

In “Monkeys in the Tree,” a collage of dissonant high-pitched trumpet calls imitated piercing simian chatter in the wild, which gave way to long, languid melodies that suggested the animals gracefully swinging from branch to branch—if you wanted to settle for a literal interpretation of those lines. They also might have suggested the monkeys’ cagey intelligence. Low moans from Paul Nedzela’s baritone sax alluded to other simian activities.

Carlos Henriquez’s slow, jazzy pizzicato contrabass solo pitted against syncopated percussion opened “Pachyderm Shout,” only to be overtaken by apt trumpeting, especially the rapid trills, from the brass choirs in full force, which had magically acquired a massive tuba to pump up this movement. Bright pipings from flutists Sherman Irby and Ted Nash symbolized those tiny birds that hitch rides on the backs of lumbering pachyderms. And trombonist Vincent Gardner’s assertive calls with the wah-wah mute iced the cake celebrating the mighty elephant.

Ace percussionist Charles Goold’s insistent, sly wire brush iterations hissed menacingly in “Like a Snake” while Lil’ Buck slithered (you expected me to use some other verb?) across the stage. Like the snake that sheds its skin, he shed his white tee shirt to reveal a tempting torso that easily alluded to that first Biblical story of Eve giving in to the wiles of the serpent. High-pitched muted trumpets introduced “Those Sanctified Swallows,” a movement that quickly developed into a boisterous, driving full orchestra ballad in ¾ time that provided ample inspiration for the virtuoso duo of Grimes and Yachts.

The driving, jazz orchestra at full tilt in “King Lion” gave Grimes the opportunity to indulge in a flamboyant virtuoso tap flourish that clearly equated the dancer’s physical stamina with the undisputed lordly strength of the jungle’s king.  In “Mr. Penguin Please,” the dancers donned formal coats and hats to strut to the elegant saunter–with a samba beat–of a 1930s swing band. The dancers took a well-deserved break in “A Nightingale” and in the concluding movement “Bees, Bees, Bees,” the dancers ambled across the stage as humans attempting to escape the attack of swarming bees.

If the dancers added panache to Spaces, Marsalis’ verbal introductions to each movement, delivered in his smooth, avuncular baritone from his post at the head of the trumpet section, invited the audience to enjoy the humor as well as the splendor of his creation.

This performance of Wynton Marsalis and the Jazz at Lincoln Center Orchestra was presented by the La Jolla Music Society on October 3, 2018, at the Balboa Theatre in downtown San Diego.