In March 2020, Cygnet Theatre, reacting to the COVID-19 pandemic, closed down its scheduled production of the musical version of La Cage Aux Folles. It’s been eighteen months before local theatre companies felt comfortable asking audiences to attend indoor theatre again, and Cygnet’s La Cage has opened for a run that has been extended to November 7. It’s been worth the wait.

Based on the French farce by Jean Poiret, the musical version with book by Harvey Fierstein and music and lyrics by Jerry Herman opened on Broadway in 1983. In case the producers might have been worried about public response, it turned out there was no need to do so. The film version, in French, had been a runaway hit in the U.S. in the 1970s and had even spawned multiple sequels (an English language version, titled “The Birdcage,” was also a hit in 1996, for Robin Williams and Nathan Lane). As a farce that presented “gay” as fun-loving and authority figures as out-of-touch, it didn’t matter that one of the leading men was often in a dress. 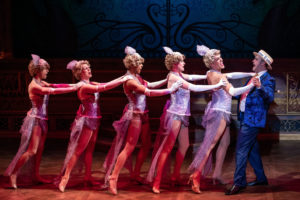 And, of course, the musical version had Jerry Herman’s songs, several of which (“The Best of Times,” “Look Over There,” “I Am What I Am”) would become recognizable. Also, there were the Cagelles (Domo D’Dante, Christian Duarte, Dante Mactantan, Steven Duncan Sass, and Siri Hafso) dancing in their finery to choreography by Luke Harvey Jacobs.

Of course, all of that was very 80s, and the show ran four years on Broadway. To 2021 ears it feels and sounds pretty dated. Being gay in 2021 is ho-hum, and drag has been supplanted to at least a degree by trans positivity. Everyone wants to be able to sing “I Am What I Am.” In 2021, musical theatre fans enjoy Lin Manuel’s hip-hop Hamilton or Dave Malloy’s Natasha, Pierre & The Great Comet of 1812, which will close Cygnet’s season next summer. 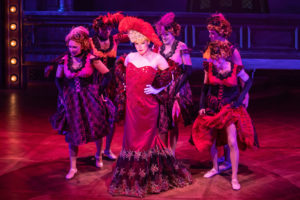 So, let’s put aside the contemporary prejudices and enjoy La Cage for what it is: a good, old-fashioned, musical.

Director Sean Murray has recruited his “A-team” to work on this production: Terry O’Donnell as music director, with Patrick Marion as orchestrator, Sean Fanning as scenic and projections designer, Chris Rynne as lighting designer, Jennifer Brawn Gittings as costume designer, Matt Lescault-Wood and Stewart Blackwood as co-sound designers, Bonnie L. Durben as property designer, and, of course, the estimable Peter Herman as the very essential wig and make-up designer. With this crew, you anticipate quality, and you get it.

Cast, too, anchored by Lance Arthur Smith, who is the model of remaining suave and debonair in the face of potential chaos (Mr. Murray opens Act 2 with a model of farcical chaos that the cast executes in breathtaking manner). He also sings well, a real asset for any actor in this role.

David McBean’s approach to Albin/Zaza is more subdued than I’ve seen in the past, especially playing the “eccentric uncle” concocted for the visit of the “authority figures” (John Rosen and Barbara Schoenhofer). His elegance as Zaza makes that character not quite so over-the-top. Mr. McBean is a bass, and some of his songs must have been a challenge to manage. Credit Mr. O’Donnell – and Mr. McBean – with making it work.

Jake Bradford and Megan McCarthy are both appropriately wide-eyed as the young, betrothed, pair whose story sets the comedy into action. Allen Lucky Weaver flits and flirts as Jacob, the “butler.” Berto Fernandez and Shirley Johnston cover secondary roles, while Melissa Fernandes and Brandon Kallen receive program bios as understudies, probably because they expect to be performing a significant amount of the run.

Performances are Wednesdays and Thursdays at 7:30pm, Fridays and Saturdays at 8pm, and Sundays at 2pm, through November 7. Free parking is available in lots throughout Old Town State Park, where the theatre is located. A limited number of valet parking slots are available adjacent to the theatre. Running time: approximately three hours with one fifteen minute intermission.