It took humanity a while to figure out war. Archeologists dig up pits full of slaughtered families. Geneticists find some tribes flourished while others vanished. But this might be mere jostling.

War didn’t hit the Big Time until it found its historian.

Around the 6th Century B.C., somebody wrote down the ancient oral tales, polished by centuries of rich and subtle variation, about a war five centuries earlier before the gates of Troy, Mediterranean city of legend. The byline was “Homer” and, whether the writer really was a blind poet or a group of scribes or even another word for storyteller, his two major works – The Iliad and The Odyssey – defined and enshrined War forever in Western culture.

Major areas of fascination here: Why did this obscure campaign that mattered so little become such a lasting source of human inspiration? And how could the story have survived and evolved so long without being written down?

Everybody welcomes and nurtures storytellers, especially a dynamic but illiterate culture like Ancient Greece. Greek storytellers carried in their heads enormous stocks of shared tales, brought out and retold nightly, tailored to audience reaction, endlessly refined for improved effect, the early literature of a dynamic civilization.

Thus the charged atmosphere at the La Jolla Playhouse, where the new offering is An Iliad, with the Homer text translated by Robert Fagles and adapted by Denis O’Hare and Lisa Peterson.

They don’t explain the fascination of Troy but they certainly provide a convincing demonstration of why it’s still with us.

Built into their title is the concept that this story is a living entity. Each telling is another Iliad. This is the one for tonight. 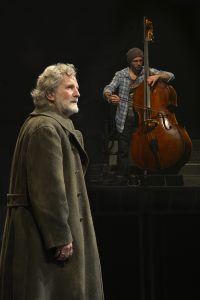 Henry Woronicz as the Poet and Brian Ellingsen as the Musician in La Jolla Playhouse An Iliad. Kevin Berne Photo

The storyteller is called The Poet. Thankfully, he’s not blind. But he is exhausted. He’s been telling this story for centuries, doomed thereto by the same gods that stirred it up in the first place when they caused Paris, a prince of Troy, to steal from a king of Greece his queen, the most beautiful woman in the world, Helen.

Poet doesn’t get into the god business too much except to avoid offending them further. That’s a price anybody pays when approaching The Iliad. Are the gods metaphors? Superbeings? Psychobabble? Whatever. All too obviously, in the universe of The Iliad, they always may be watching and they’re touchy.

Poet’s job is to put us right there, gods or godless. To lead his audience into the fog of war and help us understand how it feels to plunge a metal shaft into somebody’s chest.

He pulls himself together, skips ahead, watches for topical connections, chokes back his revulsion and, despite himself, begins again to set the old tale rolling.

“Achilles,” he notes, “has an addiction to rage.”

Homer’s Iliad tells only of a few climactic moments late in the decade-long war, leaving the judgment of Paris, the Trojan Horse and the escape of Aeneas to others. The authors of An Iliad concentrate even further, dumping nearly all the exposition and concentrating on Achilles vs. Hector and that spear through that torso.

Poet, even after weary centuries of retelling this exact tale, is once again seized by the horror and the wonder and the excitement, joining his audience in a wracking, painful, exhaustive recognition that war too is part of the human condition.

The final nail is pounded to a pulp. The Trojan War settled nothing, Poet wails, dragging us through a stultifying list of conflicts over the centuries from the Peloponnesian War right down to the siege of Aleppo in today’s headlines from Syria, step by deadly step.

This is theatre of ancient power and visceral origin. It’s a superb stage event but the idea and the understanding exceeds even this art. O’Hare, Peterson, Fagles and Homer are tapping the mainstream of human self-knowledge.

Peterson’s staging is wise and crafty, admirable in its restraint but ready with the whip. Her actor, Henry Woronicz, is all well-worn old pro, stuck in a gig he’ll never lose and seduced yet again by the power of the material. It’s a load of nuance but Woronicz uses it all, sooner or later, including a wealth of body-language detailing within Peterson’s  vision.

Two major elements of the production are of indispensable value. The music, by Mark Bennett, is scored for solo double bass, augmented by some electric gadgetry and played by Brian Ellingsen, a solemn virtuoso who hangs over the action like a sinister and restless carrion bird. The range of lyrical emoting to squeaks and grunts is an integral part of the work’s impact.

Likewise the lighting, by Scott Zielinski, whose bold slashes of cruel white slice the scenes with restless urgency, defining boundaries, emphasizing silhouettes and finding infinities in the simple rehearsal-room set of Rachel Hauck.

Though it undoubtedly is precision tuned, the entire show seems a pungent fusion of the spontaneous and the inevitable. The complex aftertaste of war lingers.

[box] La Jolla Playhouse presents An Iliad, by Denis O’Hara and Lisa Peterson, in the UCSD Mandell Weiss Forum Tuesdays through Sundays until Sept. 9. Information and tickets at 858 550-1010. Lajollaplayhouse.org.[/box]