At the tender age of 32, the Taiwan Philharmonic is barely a teenager in symphonic years. Even late-starters such as the Los Angeles Philharmonic and the San Diego Symphony have been around for a century or more. So it did not surprise this listener to discover that the Taiwan Philharmonic exuded that high-energy, rambunctious profile that middle school teachers deal with every day. 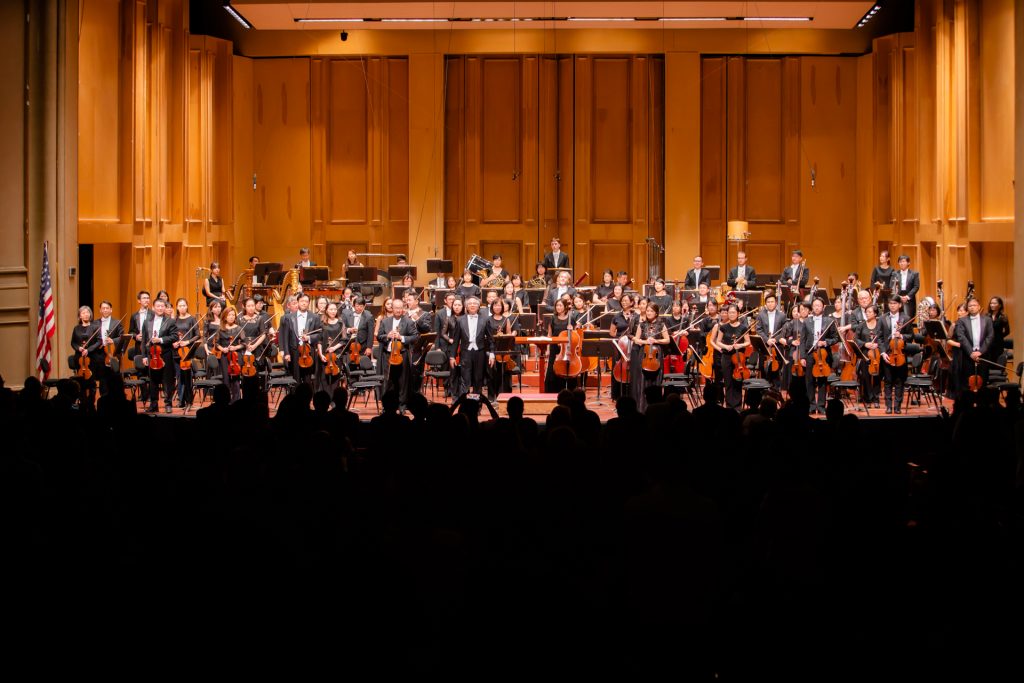 Under the direction of its Music Director Shao-Chia Lü, the Taiwan Philharmonic visited the Jacobs Music Center Wednesday (October 31) midway through its tour of the North American west coast. Lü appropriately opened the concert with Taiwanese composer Gordon Shi-Wen Chin’s turbulent “Dancing Song” from his Three Aboriginal Songs for Orchestra. From this tightly structured 10-minute movement of busy layered ostinatos punctuated by insistent drumming and flashy trumpet flourishes, I am temprted to say that Chin is Taiwan’s answer to John Adams. Chin does quote a traditional Taiwanese folksong in this piece, but its simple contours seamed like an afterthought compared to Chin’s own robust, angular thematic forays.

When it comes to exciting an audience, choosing Franz Liszt’s flamboyant Piano Concerto No. 1 in E-flat Major is a no-brainer. The British pianist Stephen Hough brought his formadible technique to this demanding concerto, fearlessly punching up its clangorous main themes, yet displaying amazing clarity and definition in the many complex virtuoso fusillades that raised the bar for piano performance in Liszt’s time. In Hough’s playing I missed the luxurious tonal colors Joyce Yang drew from the Grieg and Rachmaninoff concertos she performed last month with the San Diego Symphony, but savoring his elegant panache proved adequate compensation. Lü and the orchestra proved passionate collaborators, although their fortes sounded more brash than brilliant.

I expcted a greater contrast of orchestral sonority in Claude Debussy’s La mer, that classic Impressionist tone poem, although conductor Lü did strive to shape its broad phrases with a stylistically appropriate supple give and take. Several sections of the orchestra stood out, especially the cool urgency of the cellos in the opening movement, “De l’aube à midi sur la mer”; the sparkling dialogues between the flutes and muted trumpets as well thrilling harp glissandos in the second movement, “Jeux de vagues.”

Only the vivid orchestrations of Maurice Ravel could eclipse Debussy’s deft, inventive touch in that arena, so it was no surprise that maestro Lü chose Ravel’s Second Suite from his amazing ballet score Daphnis et Chloé to close his program. The Suite, which is technically not a suite but rather simply the ballet’s complete concluding section, offers sumptuous flute solos that portray shepherds piping at dawn and later the amorous pursuit of Pan and Syrinx. Principal Flute Anders Norell gave enchanting, shimmering accounts of these exceptional themes. Lü brought Ravel’s vibrant ballet and the concert to a rousing but rhythmically disciplined conclusion.

This concert by the visiting Taiwan Philharmonic was performed in the Jacobs Music Center’s Copley Symphony Hall on Wednesday, October 31, 2018.