To assert that violinist Johnny Gandelsman plays a wide range of his instrument’s repertory is to verge on understatement. A virtuoso proponent of J.S. Bach’s incomparable partitas and sonatas for solo violin, his best-selling CD of these works has received highest praise from both the New York Times and New York Magazine. I was fortunate to hear him perform his J. S. Bach complete violin solo works in his amazing recital at the 2018 Carlsbad Music Festival. 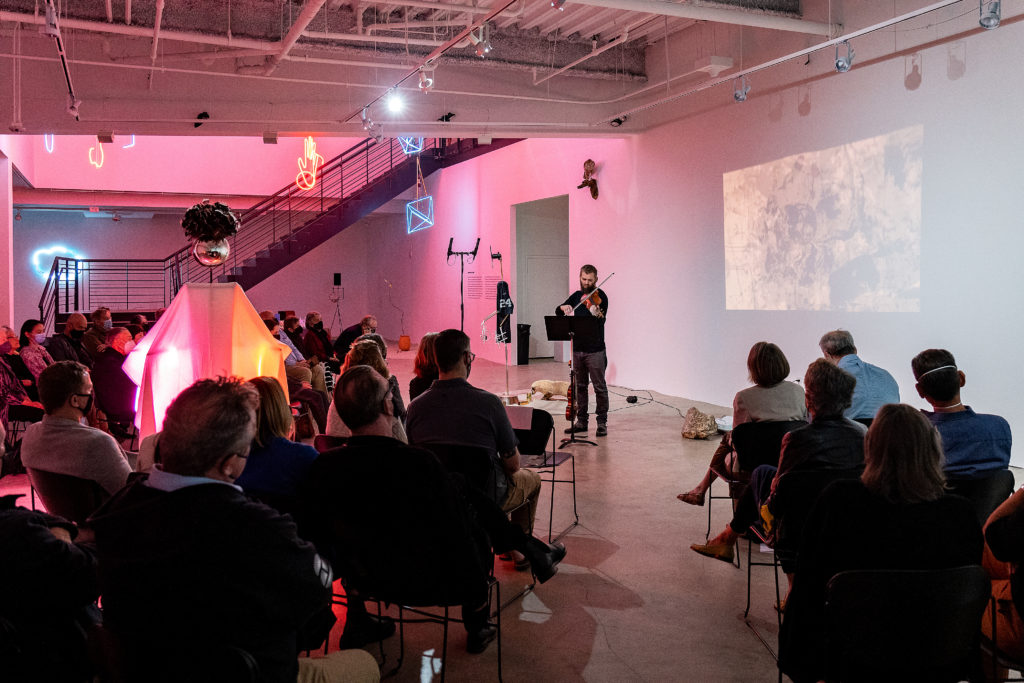 A proponent world music, Gandelsman is a founding member of the much lauded Silkroad Ensemble, whose 2016 CD “Sing Me Home” won a Grammy award for Best World Music album that year. Also a founding member of the Brooklyn Rider string quartet, Gandelsmann and his colleagues have championed contemporary composers writing for that medium. In a 2019 Art of Élan concert at The Conrad in La Jolla, we heard the visiting Brooklyn Rider play recent works by Caroline Shaw and Colin Jacobsen.

Sunday at the Institute of Contemporary Art in Balboa Park, Art of Élan presented Gandelsman in a program of solo violin works written for him as part of his current This Is America project. We heard six of the 22 compositions that comprise this laudable undertaking.

Adelina Faizullina’s “Dew, Time, Linger,” an Art of Élan commission, struck me as a delicate sound cloud in which fragile wisps of themes mingled with otherworldly sliding harmonics and almost imperceptible taps of the bow on a string. According to the composer, who attended the program and spoke before Gandelsman gave the premiere of her work, the piece reflected her sense of isolation during the early days of the current pandemic. Gandelsman’s other premier of the evening, Matana Roberts’ “Stitched,” revealed expansive, yearning themes sheathed in his most opulent—almost robust—sonority of the evening. While Roberts also linked her commission to the stresses of the pandemic, her tone reflected a cautious sense of hope rather than mere isolation.

In “Steeped,” Olivia Davis explores the political and social conditions of the last two years in three connected movements. After an opening movement of isolated, tentative gestures, her center movement presents bolder themes that morph into modest flurries of perpetual motion before ascending into the pizzicato ether of the violin’s upper register. She names her final movement cadenza, although I perceived her ending as a cadential conclusion of forces rather than the usual bravura display associated with the term cadenza.

“New to the Session,” Rhiannon Giddens sonic salute to her freshman experiences accompanying traditional Irish dancers, stood out from the austere, highly abstract approaches heard on the rest of Gandelsman’s program. Some half dozen contrasting dance tunes—or fragments of dances—unfold in proud procession, some slow and wistful, others fast and replete with virtuoso flourishes. One of the tunes was actually set in the major mode—typically considered the third rail of contemporary composition—the only moments of the program to venture into such familiar territory.

Christina Courtin’s “Stroon” contains fleeting allusions to Irish dances and ballads, but maintains the mode of austere abstraction that dominated Gandelsman’s program. If I had to choose a composition that is most likely to find an approving audience—other than Giddens’ easy-listening dance anthology—I would point to Tomeka Reid’s “Rhapsody.” Another work born from pandemic reflection, “Rhapsody” is structured on a captivating sinuous solemn theme that breaks into discrete fragments and modest excursions before it returns in quiet consolation.

This recital was presented by Art of Élan on Sunday, February 13, 2022, at the Institute of Contemporary Art, San Diego, located in Balboa Park. Gandelsman will also perform on violin the complete solo cello suites of J.S. Bach on Monday, February 14, at the JAI performance space in La Jolla’s Conrad Prebys Performing Arts Center.