In her local debut with the San Diego Symphony, the young Lithuanian conductor Mirga Grazinyté-Tyla made a favorable impression. Unleashing her highly animated podium style on two classics from the turn of the last century, Jean Sibelius’s Violin Concerto in D Minor and Igor Stravinsky’s “Rite of Spring,” the recently appointed Los Angeles Philharmonic Assistant Conductor displayed the athletic approach to conducting favored by her boss, Gustavo Dudamel. She is not, however, his clone. With guest violinist Karen Gomyo, Grazinyté-Tyla capitalized on the rhapsodic character of the Violin Concerto without allowing the work to descend into a mere virtuoso showpiece for the soloist. In Gomyo’s arresting 2013 performance of Shostakovich’s First Violin Concerto with the local orchestra, she demonstrated impressive technical prowess as well as a rich, velvety sonority. Her performance Saturday (December 5) displayed a wider range of colors that aptly mirrored Sibelius’s more volatile emotional temperament. 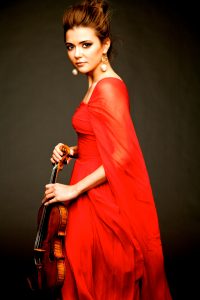 But Grazinyté-Tyla wisely used Sibelius’s brooding, dark orchestral colors and transparent textures to balance the Gomyo’s passionate exuberance, cultivating the composer’s iconic Nordic foreboding and treating his soloistic use of a large orchestra with the devotion of a Mahler scholar. This yin-yang balance of soloist and conductor produced one of the more rewarding accounts of this popular concerto I have experienced.

The first half of Grazinyté-Tyla’s “Rite of Spring” continued the concerto’s fervor, heightened by the ballet’s menacing story and Stravinsky’s hard-edged, neo-primitive harmonic language. She coaxed haunting solos from the woodwinds, notably Principal Bassoon Valentin Martchev and English Horn player Andrea Overturf, and she drew muscular snarls from every corner of the brass choir. Stravinsky did not give the string sections much chance spin out pretty tunes, but their clean rhythmic ostinatos and precise pizzicatos drove the orchestra with pulsing conviction.

If only Grazinyté-Tyla had retained this superbly crafted dramatic intensity throughout the second half of the ballet, Stravinsky’s violent climax would have proved more devastating. But the audience at the Jacobs Music Center’s Copley Symphony Hall gave conductor and orchestra a rousing standing ovation at the conclusion of “Rite of Spring.” What if the San Diego Symphony’s next Music Director were a spirited young woman with Grazinyté-Tyla’s formidable technique? Now THAT is something to ponder.

An unremarkable reading of Beethoven’s Lenore Overture No.3 opened the concert, although the overture’s few dramatic moments showed hints of passion.

[themify_box style=”shadow” ]This San Diego Symphony program was presented in the Jacobs Music Center’s Copley Symphony Hall December, 4, 5, and 6, 2015. The Saturday (Dec. 5) concert was reviewed here. The next offering on the orchestra’s Jacobs Masterworks Series is a program of Berlioz’s “Te Deum” and the Brahms Double Concerto: December 11, 12, and 13, 2015, in the same venue.[/themify_box]