After the San Diego Symphony’s month-long festival of American Music with guest conductors offering a smorgasbord of enticing and exceptional music, Music Director Jahja Ling returned to the podium Friday (February 3) with his predictable trove of standard repertory: the Tchaikovsky Fourth Symphony and Camille Saint-Saëns’ Violin Concerto No. 3 in B Minor. 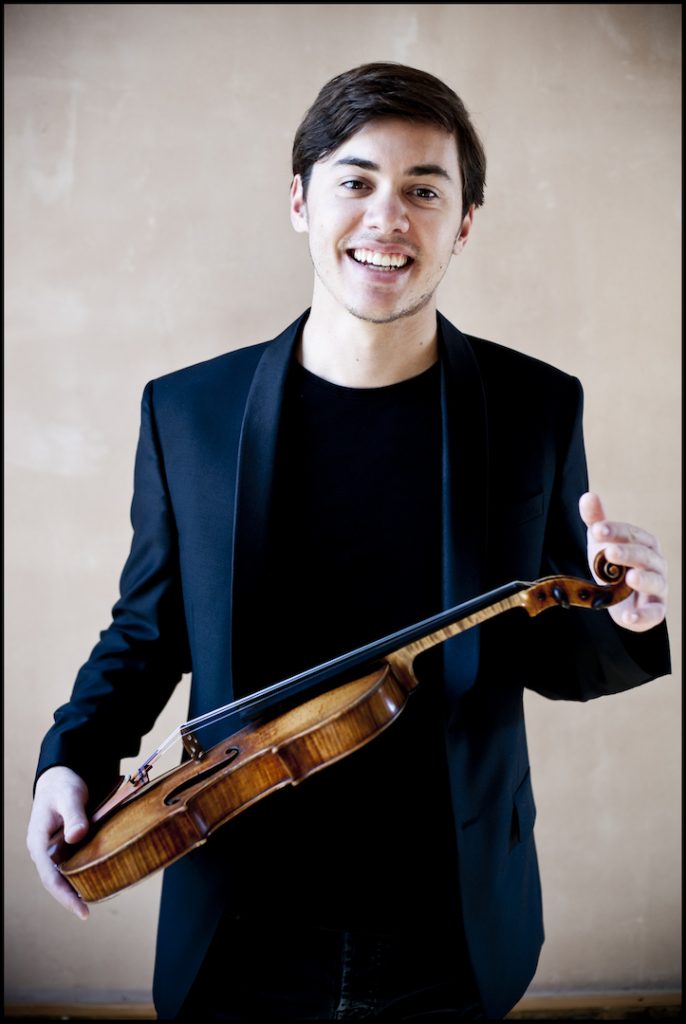 Equally predictable was the orchestra’s passionate—even exuberant—response to Ling’s vigorous and vividly detailed direction of the hulking Romantic Symphony he conducted from memory and clearly relishes. From the snarling, brilliant brass fanfares that opened the Symphony to the Scherzo’s rush of understated pizzicato strings, the orchestra gave a vivid, muscular account of the Tchaikovsky Fourth Symphony.

Especially in the outer movements, Ling judiciously paced the Symphony’s agitated dramatic climaxes—prompted by the crises in the composer’s personal life—that define this symphony in the Tchaikovsky canon. The San Diego musicians responded to Ling’s direction with the dark, blazing sound and sturdy ensemble that he has cultivated during his tenure here.

The repose of the two inner movements was not glossed over, however. Principal Oboe Sarah Skuster bathed the Russian folk tune that opens the Andantino with exquisite melancholy, which was deftly and tenderly extended by the entire cello section. And at the movement’s close, Andrea Overturf’s English Horn reprise of the tune provided an eloquent benediction. In the Scherzo, the virtuoso extended string pizzicato sections sounded more disciplined than enchanted, but the woodwinds’ spirited bucolic folk dances redeemed that movement.

According to a note in the printed program, the San Diego Symphony has programmed Tchaikovsky’s Fourth Symphony some twenty times, which easily gives it undisputed chestnut status. Before this concert, Saint-Saëns’ equally arch-Romantic Violin Concerto No. 3 in B Minor had been played by the orchestra only twice. Written but a few years before the Tchaikovsky Fourth Symphony, this Concerto also brims with sumptuous melodies and features delectable caprices for the soloist.

If its Gallic elegance has kept it in the shadow of the ubiquitous and more self-consciously showy German and Russian Violin Concertos, on Friday the young American violinist Benjamin Beilman made a commanding case for this under appreciated Saint-Saëns’ Concerto. The Mainly Mozart Festival first brought Beilman to San Diego to play a Mozart Violin Concerto in the summer festival’s 2015 season. He was brilliant then, and he sounded even better in the Saint-Saëns!

Beilman won me over immediately with a dulcet intensity that radiated through the Concerto’s magically rhapsodic opening movement. His unflinching sense of melodic direction, gleaming violin tone that shimmered ecstatically in the highest range, and his nimble phrasing made the entire Concerto dance euphorically. Ling and the orchestra gave him ample, well-tailored support throughout, complementing his sophisticated account of the Saint-Saëns’.

Ling opened the program with Dmitri Shostakovich’s “Festive Overture,” Op.96, a decidely forgettable piece by the eminent Russian symphonist of the last century, although with its splashy opening trumpet fanfares, it gave the trumpet section a chance to warm up for the Tchaikovsky. But it remains a hastily dashed-off occasional piece intended for a Communist party anniversary in 1954, and it does the composer no honor to revive this perfunctory trifle.

[themify_box style=”shadow” ]This concert was performed on Friday, February 3, 2017, by the San Diego Symphony at the Jacobs Music Center’s Copley Symphony Hall in downtown San Diego. The program will be repeated–with Lang Lang playing the Rachmaninoff First Piano Concerto in place of  Saint-Saëns’ Violin Concerto with Benjamin Beilman–on Sunday, February 5, 2017, in the same venue.[/themify_box]