Relational dynamics and fundamental differences of opinion regarding faith and family are under examination in the quick-paced Nathan Englander play What We Talk About When We Talk About Anne Frank, playing at San Diego’s Old Globe Theatre through October 23.

This cast, directed by Barry Edelstein, is comprised of a Hasidic couple visiting from Israel (Mark, introduced to us as Yerucham, and his wife Lauren/Shoshana) and a secular couple living in Miami (Debbie and Phil) as well as their son (Trevor). In the show, Shoshana and Yuri have just arrived in south Florida for a short visit, the impetus behind which appears to be well-timed Facebook stalking on Debbie’s part but, despite a long-held friendship, discontent and disagreement are brewing. 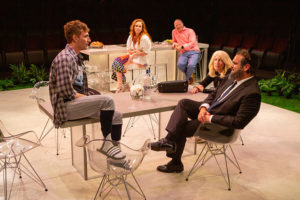 (from left) Nathan Salstone as Trevor, Rebecca Creskoff as Debbie, Joshua Malina as Phil, Sophie von Haselberg as Lauren, and Greg Hildreth as Mark in What We Talk About When We Talk About Anne Frank, 2022. Photo by Jim Cox.

All five actors in this production deftly portray their characters with aplomb. Rebecca Creskoff, as Debbie, carries a high-level nervous energy throughout which makes her pronouncement that anxiety is “where [she] shines” feel impeccably honest: as her husband can’t help but declare, she’s the “Abraham of Ativan”; this characterization creates the space needed for her to lean into rare moments of vulnerability with her lifelong but long absent best friend, Shoshona/Lauren. Sophie von Haselberg, as Shoshona, carries the confidence of her cultural conviction with ease. As Shoshona highlights her own return to Judaism with a claiming of “primal songs” as her own, there is a lightness and a joy in the portrayal. It is clear that the association with faith drives Shoshona and, while the character rarely agrees with Debbie, von Haselberg embodies her genuine optimism skillfully.

Playing the two husbands are Joshua Malina (Phil) and Greg Hildreth (Yuri/Mark), both of them tackling the self-righteousness required to perfection. Malina and Hildreth handily co-create the chasm that exists between their characters’ worldviews, leaving the audience wondering if any possible middle ground can possibly exist, then adroitly use their nuanced reactions to the events unfolding on stage to find ways to bridge center. It’s masterful.

The fifth player, Nathan Salstone, as Trevor, has fabulous comedic timing and brings a sense of authenticity to his role of teenage son. Salstone’s dry delivery is the impetus behind many of the authentic laughs throughout the piece, and the scene in which he pulls out the driver’s license is irreverent in a way that launches many of the deeper conversations that the play embarks on.

Adding to the uniqueness of this show is the in-the-round staging employed at the Sheryl and Harvey White Theatre, a choice for this production which creates an almost fishbowl-like feel in the south Florida home. While there are moments when this works well (as when a rainstorm begins and the actors immerse themselves just feet away or in the marijuana/high scene when the four adults avail themselves of all zones of the stage, kitchen counter and floor space included), placement of actors at the table does tend to lead, at times, to some diminished sightlines during more quiet moments. That said, this is likely due more to the balance of those slightly more static scenes with other more kinetic ones, rather than the set design by Paul Tate Deboo III. In fact, the set for this production, which features tile floors, transparent Eiffel-style chairs, working faucet, suspended shelving, and light fixtures, is both beautiful and effective in establishing a modern-day luxury feel, which is then edged with the greenery and plants of south Florida. 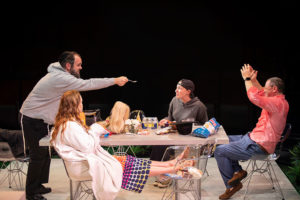 (from left) Greg Hildreth as Mark, Rebecca Creskoff as Debbie, Sophie von Haselberg as Lauren, and Joshua Malina as Phil in What We Talk About When We Talk About Anne Frank, 2022. Photo by Jim Cox.

To no surprise, What We Talk About When We Talk About Anne Frank does not shy away from difficult topics. Throughout the production, many jokes are made about the Holocaust, genocide, and the Israeli occupation, which some may find in questionable taste or uncomfortable. The author, having spent his youth in an Orthodox Jewish community and five years in Israel, certainly knows the impact of these elements and has chosen them intentionally. In fact, discussion that weaves in and amongst these topics are the crux of how the couples realize that their definitions of faith, family, and responsibility to Judaism differ fundamentally. After all, as Debbie believes, there must be a lesson to take away from atrocity, whereas Shoshona sees consequences as a calling to learn and become more devout. The Florida couple is perfectly at peace raising their son with a secular approach to faith and is appalled by the state of affairs in Israel, affirming “there is a price to the politics of your faith.” On the other hand, the Israeli couple observes tradition, in a household where they raise their ten daughters, and are disgusted at the American version of Judaism: “skim milk” with “all of the joy filtered out.”

Regardless, all is not as it seems and therein lies the mastery of the script and this production. Under Edelstein’s tutelage, the actors are able to piece together small moments of give and take and – thanks to vodka, pot, and a rainstorm – they find moments of hope and laughter even in the darkness of the oftentimes challenging subject matter and the named encroaching antisemitism. After all, as we are reminded: “for special things, one bends.” It feels almost prescient, a metaphor that keeps living and breathing even after you leave the theatre… how might this be a microcosm of society as a whole and what learnings can we glean from it? Prepare to continue ruminating beyond the Alcazar Garden. This one might stick with you.

What We Talk About When We Talk About Anne Frank runs at the Old Globe’s Sheryl and Harvey White Theatre through October 23. Showtimes vary.