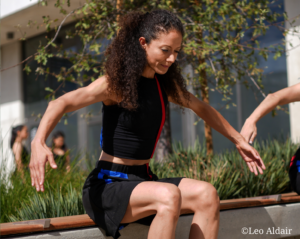 Trolley Dances, now in its 24th year, often serves as a mini-tour of San Diego neighborhoods, with dances set a short walk from trolley stops. This year’s show, which ran last weekend, highlighted the San Diego Trolley system itself. All five dances took place at stations on the sweeping elevated extension of the trolley line—to UCSD—that opened last fall. 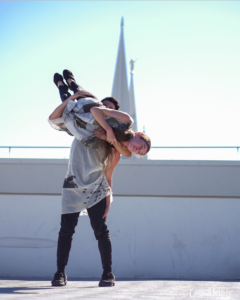 In Isaacs’ “Creation Myth,” seven dancers were like elemental forces, pulling against one another, reaching from the ground in sinuous stretches as if emerging from the primordial ooze, bouncing on their heels like excited molecules. Isaacs drew on Taino and Lackawanna creation myths, while a recorded text offered what sounded like the version from Genesis (and the spire of the Mormon Church rose behind the dancers).

Visually, the dance was a delight. Artist Rosemary Kimbal made the dancers’ tunics, black abstract designs painted on sheer white fabric, and a similar cloth in which one woman was rolled up and then released. Isaacs has a brilliant eye for composition, and she blended a range of groupings and levels, spotlighted a pair of dancers while the rest clustered; 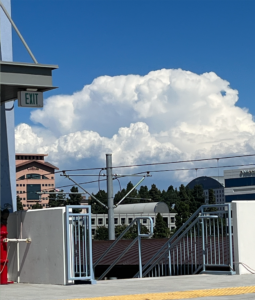 she might have even choreographed the mesmerizing cumulus cloud at the show I saw.

We got on the trolley and rode to the UCSD Central Campus station for the next three dances.

Miroslava Wilson, who directs Pénduo Cero Danza Contemporanea in Tijuana, got the audience moving through the space in her evocative “La Esquina del Movimiento / The Movement Corner.” Six dancers struck poses on a wooden structure. Then they ran (we followed) out to a plaza, each in their own territory, doing sharp, angular moves with quick changes of direction. Gradually, the linear, separate dances gave way to clustering, touching. Five dancers lay on the ground, as one woman, standing, said, in Spanish, then English: “Let my real name be heard in the corner of movement.” 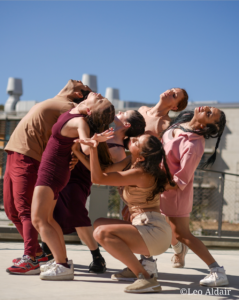 Wilson’s piece called attention to the hardness of the site: the concrete plaza, the wire fence the dancers lined up against, then sprang from, and beyond the plaza, a vast construction site. Minerva Tapia drew the eye to softer features, her eight dancers moving among planters filled with trees and grasses.

Called “Estudiantes,” Tapia’s dance reflected the discipline of student life in precisely flexed wrists (delicate and gorgeous), clean-angled directions, and linear red and blue stripes on the black costumes. It’s a discipline Tapia knows well; a leader of the Tijuana and cross-border dance communities, she holds an M.A. from UC-Irvine and a Ph.D. in Critical Dance Studies from UC-Riverside. There were also more lyrical, melting moments.

Rachel Catalano’s “shake” also revealed a more natural aspect of the area, beginning in a hillside garden where eight dancers paired up. One member of each pair stood behind the other, and were they supporting or constraining as the front dancer reached but was held? Running from the garden, the dancers lined up on the concrete stairs and descended stiffly. 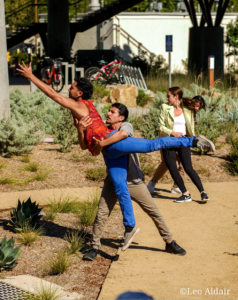 According to the program, Catalano was working with the idea of gazelles shaking off trauma after escaping a predator; I kept seeing a struggle between robotic and human modes of being. Either way, the piece offered a compelling emotional throughline, as the dancers grouped on the plaza, encircled one woman who tried to escape, and finally paired up again and came into an embrace.

Terry Wilson, who recently came on as San Diego Dance Theater’s new Artistic Director, brought a playful mood to the closing dance, “The Case.” Seven women in trench coats and soft-brimmed hats did jazzy steps through the plaza at the UCSD Health station. At first, as they opened their coats and revealed vividly colored tops, they were flashers. Later, doing tight little walks and jazzy kickbacks, and fighting over two mysterious briefcases, they became detectives. Once they opened the briefcases, took out vials of soap bubbles, and wafted bubbles through the crowd, it was sheer fun.