Each of us has a personal geography of emerging from the pandemic, landmarks that tell us we’re coming home. One of my milestones was the Dance is in the Air festival at Liberty Station, which began May 21 and continues through Sunday. Another biggie—the return of Trolley Dances!

A signature San Diego arts event, Trolley Dances debuted in 1999. It was the brainchild of Jean Isaacs, presented by San Diego Dance Theater. And it drew mobs of folks to see short dances by diverse choreographers, set at or near San Diego Trolley stations. In 2020, we had to settle for a documentary viewing of dances from previous years. Last weekend, Trolley Dances came back!

Granted, there were changes. The home to which we’re returning, post-COVID, isn’t the same one we left. There were only four dances, instead of the usual six or seven. Rather than wander a bit, exploring new parts of the city, the size-limited audience stayed at the trolley stations. 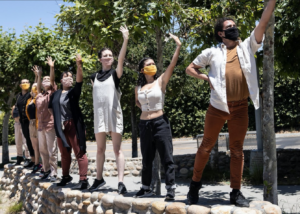 Like everything this past year, the show required some pivoting. For Jody Oberfelder, a New York-based choreographer who’s done significant site-specific work, ideas for her piece were sparked by its planned setting: the 100 Stones monument at SDSU. She worked with the eight dancers to create the witty “Monuments,” in which dancers posed like statues—balancing with one leg extended like a Degas ballerina, lifting a hand as if holding an apple or accepting accolades from an adoring throng. In transitions, they pirouetted and strutted in unison. The monument theme guided Oberfelder’s music choices: a fractured reconstruction of Purcell’s “Let me Freeze Again to Death” and a piece by electronic music duo Royksopp titled “Monument.” Then 100 Stones turned out to be off-limits; instead, she had to use the not-at-all-monumental 70th Street Trolley Station. 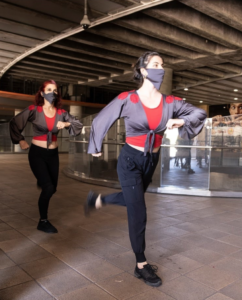 Despite the problems, Oberfelder made great use of the station’s stone walls, and the piece delivered the fun of Trolley Dances. So did Isaacs’ “Bolero,” set to the driving pulse of Karl Jenkins’ all-vocal “Bolero.” The cast of 10, in red and black toreador-like costumes, marched with quick pivots and changes of direction. As the music intensified, they flung themselves through space or crouched like football players in a defensive lineup. Finally, as if they’d fought the music and lost, they dropped to the floor. Although Isaacs originally created this piece for a different site (I believe for a stage show), the sense of being driven by the machine-like tempo worked in the cavernous cement-and-metal trolley station.

The rest of the program, I found less engaging. Monica Bill Barnes, an acclaimed New York dance artist with UCSD roots, has made some indelible Trolley Dance works, and the more I thought about her latest, “It’s Been Too Long,” the more I appreciated it. One by one, nine women entered the SDSU Trolley plaza, gave a little wave, and briefly dropped their masks, as if to say, “We’re back.” Facing us, several mimed picking up something from the ground, pulsed hands to hearts, or danced with an imaginary partner. 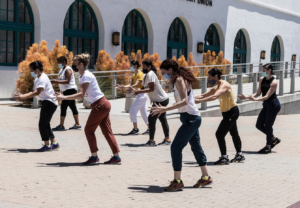 “It’s Been Too Long.” Photo by Manuel Rotenberg

The music switched from the delicate “Humming Chorus” from Madama Butterfly to Sly & The Family Stone, and all nine went into a unison routine that, in typical Barnes fashion, looked deceptively simple; however, there was a new bit of tricky footwork, a hip swerve, or a snappy finger move every few seconds, performed by a sterling cast. Despite all that, the piece didn’t grab me. The opening with the dancers waving felt too long; and the whole didn’t cohere.

Mary Anne Fernandez Herding brought her Movement Source Dance Company from Phoenix for “Reconnent. Home.” The piece was set at the Grantville station, but didn’t take advantage of the station’s distinctive multi-story staircase. This may have been another pivot—maybe the company planned to play with the staircase, but it wasn’t allowed. Instead, they used the lower plaza as if it were any big open space, doing a range of generic-looking groupings: pairs, trios, a vertical line from which dancers peeled off one at a time. 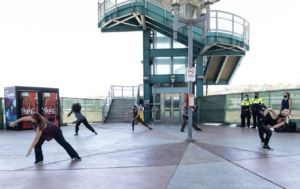 This weekend concludes a busy four weeks for San Diego Dance Theater. Along with kicking off the Dance is in the Air Festival and putting on Trolley Dances last weekend, they’re presenting the final Dance is in the Air performance this weekend—the Young Choreographers showcase plus some special guests.