The Old Globe’s “Taming of the Shrew” is a roaring romantic good time – with able comic actors all amplifying whatever ribaldry and comedy Shakespeare left open in the text, but serving a sincere and moving portrait of the genuine joining of two souls.  It’s a gender battle that everyone wins. 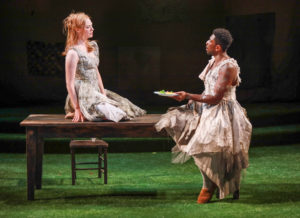 Deborah Ann Woll as Katherine and James Udom as Petruchio in The Taming of the Shrew at The Old Globe, 2022. Photo by Jim Cox.

Director Shana Cooper succeeded – within the scanty plot of ground that is the play – to make it about the equal powers (and faults) of men and women and not focused on critique of The Patriarchy as the play so often generates. She takes Shakespeare at his word that True Love is glorious only when shared.

The plot intertwines the romancing of a younger more tradition-bound daughter, Bianca (Cassia Thompson), by suitors who cannot succeed until her older sister Katherine, the Shrew, (Deborah Ann Woll) is wed as dictated by their father. Into the city arrive two sets of woo’ers, one for each, with neither specifically looking for a wife or with Katherine as a target.  Lucentio (Jude Tibeau) arrives first with his servant to “haply institute a course of learning , and ingenious studies” with irony to follow as he winds up courting Bianca disguised as tutor.

Petruchio (James Udom) breezes into Padua from Verona after his father’s passing to visit his friend Hortensio on “such wind as scatters young men through the world….haply to wive and thrive.” While Hortensio seeks Bianca, he offers to help Petruchio “to a wife” (to his own advantage as the pairing would free Bianca) but in fairness to his friend, pulls no punches describing Katherine as no one he himself would marry.  The sudden onset of Petruchio’s passion to pursue Katherine seems a stretch, except maybe as a young man’s challenge with no thought of the possible impact. Lucentio, Hortensio and another local suitor, the older Gremio (Jesse Perez) all misrepresent themselves in the pursuit leaving Bianca the sole bearer of integrity in that subplot. It’s ok to lie in pursuit of Love?

There’s a decision point in the bard’s “Hamlet” when the actor playing Hamlet projects whether he believes Hamlet to be either crazy or just really smart. It’s hard to tell who leads who in this rendition of the Shrew. The traditional view that Petruchio batters Kate into submission by refusing food and rest is put in much doubt by how Kate takes it all in. It seems plain that this Kate is not at all concerned with whether she has power. Deborah Ann Woll’s version rolls her eyes and “acquiesces” with a feigned Valley Girl accent.  Meanwhile Petruchio makes commandments to which he complies in parallel to her. And most prominent a signal withal, courtesy Costume Design by Asta Bennie Hostetter, presents Petruchio in a bridal gown to match Kate’s.

Would it work for a modern Petruchio to even have the leverage to starve a modern day Kate?  Certainly not in wealthier circles today.  Maybe by a bit of stalking, starve her of sleep? And even for Shakespeare, is that really what turns Kate’s heart? Was the Bard probing the inner workings of Apostle Paul’s letter to the Ephesians 5:22 “Wives submit to your husband..?” Are Shakespeare and director Cooper stepping up to challenge the conventional misinterpretation of that verse as total abdication of a woman’s responsibility for self to a husband?

The entire cast exudes a joyful, youthful energy. The comic timing of John Tufts as the rock-n-roll suited Hortensio (among other defltly switched roles) as one of Bianca’s suitors was infectious.  10 of the 20 actors are part of The Old Globe/University of San Diego Shiley Master of Fine Arts program – a program with alumni such as Jim Parsons, “Sheldon” of the long running “Big Bang Theory” television show.

There is some really clever choreography (movements by Tiffany Rachelle Stewart) and not just of dance, but the players interacting as they speak.  There is one tumble by USD professor Jesse Perez doing The Worm in a dance scene that looked likely to break the elder fellow he plays as Gremio. 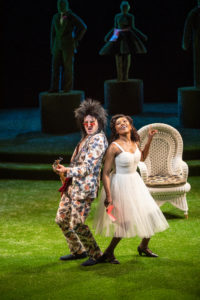 John Tufts as Hortensio and Cassia Thompson as Bianca in The Taming of the Shrew at The Old Globe, 2022. Photo by Jim Cox

The play as presented ran just under three hours with a single 15 minute intermission. It’s possible director Cooper cut the prelude (which some say pre-dated Shakespeare), called The Induction, as a nod to audience attention span, choosing only the main acts instead of the play within a play intended to set the stage.

One really weird dance scene seemed out of place and unneeded as was the song “Tom, Dick or Harry” that was not part of the Bard’s version but a song in Cole Porter’s broadway musical “Kiss Me Kate” based on Shakespeare’s “Taming of the Shrew.”  A mix of modern items – electric guitars; modern rock and pop music and a golf cart – robbed the show of a sense of timelessness it had to a point, despite the modern wardrobes, until the electric guitar appeared.

The sound design by Paul Peterson and Paul James Prendergast makes every speech clear and as if presented to each audience member individually, even in this outdoor setting. The set design by Wilson Chin, lighted by Stephen Strawbridge, of two facades with a grassy patch between festooned with bushes trimmed to the figures of young men and women, the minimal changes allow the audience’s imagination to focus on the story and the characters.

And then there’s the implied bits of the profane: as Petruchio asks Kate to sit in a suggestive manner; another part where Shakespeare surely meant to be crude in a reference to tongues and tails; a character standing to urinate with his back to us; and a dangling champagne glass deployed by fair Bianca in mockery.  Even the ribaldry is shared between genders in another nod to equality.

Kate’s final speech explains the state of true love for both she and Petruchio and the sincerity that Woll and Udom embody in those moments on stage seals the deal for them and for us in the audience.  As Petruchio himself calls out, having shared a single kiss with Kate, go see this show as “Better once than never!”

The Taming of the Shrew at the Old Globe outdoor Lowell Davies Festival Theatre plays through July 10th.

Download the complete program here.
For this performance, the role of Vicentio was played by Brett Cassidy.