The Roustabouts return to live theatre by presenting Christopher Durang’s For Whom the Southern Belle Tolls at Moxie Theatre. While the title selection is hilarious, the other three short plays that comprise the evening are a mixed bag. 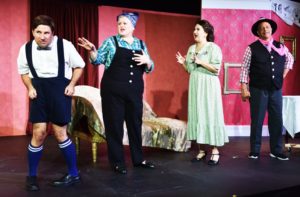 Mr. Durang made his reputation writing short plays, much of the time satirical. I recall seeing his most famous early work, Sister Mary Ignatius Explains It All For You, which was paired with another short play, The Actor’s Nightmare. The nightmare was familiar: an actor who had no idea what play he was in and what role he was playing had to improvise, to his dismay. Sister Mary featured a nun who was teaching young people about Catholicism, from a pre-Vatican II viewpoint. It was outrageous and featured a murder committed in the name of sending the deceased directly to heaven.

Would that any of the four plays in For Whom the Southern Belle Tolls had proved to be as outrageous, but then the fault is more the author’s than the performers.

Actually, had they included two more plays, one titled A Stye of The Eye and the other titled Mrs. Sorken,  the company would have needed to call the evening, Druang/Durang, which is what the six-play version was titled in its New York run. That omission allowed the centerpiece of the evening to be not only the evening’s title but its strongest play.

Given the title, one would think that Ernest Hemmingway’s For Whom the Bell Tolls might have been referenced (if it was I missed it). Instead, the parody focused a different familiar work: Tennessee Williams’ The Glass Menagerie. In the Durang version, an introverted boy (Omri Schein) collects glass swizzle sticks, to hilarious effect, while his brother, Tom (Walter Murray), keeps trying to escape to the movies and the boy’s mother (Wendy Wadell) acts long-suffering, if not actually “belle-ish.”. It takes only a small amount of knowledge of the Williams play to “get” Southern Belle, but that small amount is enough to provoke laughter ranging from chuckles to at least one guffaw, if not more. 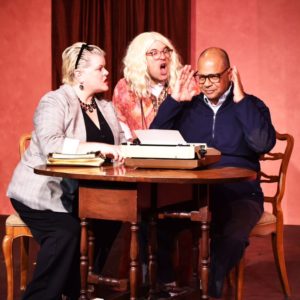 Cast of “Business Lunch at the Russian Tea Room.”

The other play that worked well was titled “Business Lunch at the Russian Tea Room.” Here, Chris (Mr. Murray) is entertaining truly awful film ideas from a producer (Wendy Maples) while Chris’ agent (Mr. Schein, dressed to look like the iconic Hollywood superagent, Sue Mengers) tries to minimize the awfulness. Chris gets to remain above the fray as the ideas get wackier and wackier.

The two plays that work less well were “Wanda’s Visit” and “Nina in the Morning.” “Wanda’s Visit” finds a former high school flame (Ms. Maples) descending on a couple (Ms. Wadell and Mr. Murray) whose marriage needs a lift but not in the way that the former flame has in mind. “Nina in the Morning,” the curtain-raiser, not only gets the evening off to a poor start, especially if one is unaware that there are four plays on the bill, but it’s by far the weakest effort, downright confusing to say the least.

Alyssa Kane’s scenic and properties design is the show’s strongest technical element: her pealed wallpaper at the upper corners provides endless opportunities for guessing who is pictured there. Renetta Lloyd and Roslyn Lehman’s costumes are most memorable when they trend toward the gaudy. Jon Fredette’s sound design includes musical interludes between the plays. Chloe Oliana M. Clark’s lighting design did not call attention to itself, which is a compliment, not a criticism. Phil Johnson’s direction focused on helping the cast mine the humor in each play.

The company has one additional mainstage production on tap, Rona Munro’s Iron, scheduled for next June. It also has a history of popping up with one-night-only readings between productions. The troupe attracts solid acting talent. I hope that a full-length play will provide an opportunity to produce a more coherent evening than this one proved to be.

Performs at MOXIE Theatre, 6663 El Cajon Blvd., Suite N, San Diego 92115, Thursdays – Saturdays at 8PM; Saturdays at 2pm & Sundays at 2PM, through December 4. Parking is available on the street, as well as in the lot for the shopping center where the theatre is located (there is also parking available at the rear of the building). COVID precautions apply and are checked; audience members must wear masks throughout the performance. The run time is approximately 90 minutes. Other credits: Stage Manager: Zack King, Line Producer: Ron Christopher Jones, Assistant Costume Design/Head Wardrobe: Maggie Allen.