El Borracho, a world premiere play performing through March 20 at The Old Globe’s Sheryl and Harvey White Theatre, is lyrical, gorgeously designed, and frustrating to parse. It’s 90-minute, no intermission, run time feels longer, and that’s not a good thing. 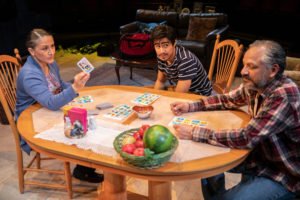 Raul (Jesse J. Perez) is sick and dying, though he is sometimes in denial of that fact. He has gathered his ex-wife, Alma (Zilah Mendoza), and his son, David (Matthew Martínez), around him, though neither particularly wants to be there. David escapes for long periods of time. Alma, who has divorced Raul some time ago, wants to be supportive, but Raul’s behavior continues to remind her what she couldn’t tolerate to the point of leaving him.

To some degree, Raul has brought his sickness upon himself. He doesn’t just drink, he lives to drink. In the Mexican game called lotería there cards depicting various characters. El Borracho is the drunkard, and playwright Tony Meneses apparently drew on childhood experience when he associated this card with his father.

There is a push/pull between living and dying in the play, perhaps symbolized by the expensive prescriptions that Raul sometimes forgets to take, resulting in whatever he has getting worse. I say, “whatever,” as Mr. Meneses never reveals what disease Raul has. To my mind, this is a major omission. If, for example, it is HIV, that can explain in greater depth Alma’s clearly fraught decision to leave him, despite clearly loving him still. It can also explain some of David’s behavior, which I will not spoil by describing in detail. 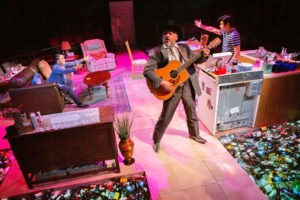 Can El Borracho’s story arc be attributed to alcoholic behavior and its effects on the family? In part, yes, but it’s a richer tale than that. Raul is dying but he’s not to be pitied. He’s defiant in the face of death but he also cares about his family. He’s resigned to his fate but not completely so.

Under Edward Torres’ direction, it’s the stellar acting that makes up for the play’s weaknesses. Particularly, Ms. Mendoza tempers anger with compassion in emotionally satisfying ways. Mr. Martinez exemplifies the yearning that David has for his father’s and mother’s love and acceptance. Mr. Perez gives a hard-to-like performance which, nevertheless, keeps the center holding.

The Old Globe’s standard of technical production is a high one, and El Borracho lives up to the expectations that standard engenders. David Israel Reynoso’s scenic design provides spaces for each character, as well as facilitating audience attention in an in-the-round space. His costumes match the characters and provide clues to the secrets each character has held. Mextly Couzin’s lighting design accents the scenic design effectively. David R. Molina’s sound design makes speech clear even when actors have their backs to the audience, and his original music is based on the pop sounds of Mexican border culture.

World premieres are often improved on after their first production, and I suspect that Mr. Meneses will work on El Borracho after seeing how audiences react to it. Assuming that he makes his characters’ relationships less mysterious, I suspect that he will experience great success with future productions.

Performs Tuesdays, Wednesdays, and Sundays at 7pm, Thursdays, Fridays, and Saturdays at 8pm, and Saturdays and Sundays at 2pm in San Diego’s Balboa Park. Parking is free throughout the park, but it can be difficult to find, especially on weekends. Inquire about valet parking if walking is an issue. Tickets are available online: visit https://www.theoldglobe.org for details, as well as telephone and in-person purchase options.