Although Edward Albee’s Who’s Afraid of Virginia Woolf? set the template of a play that features a pair of quick-witted, bickering couples, I suppose it’s flippant to call Nathan Englander’s What We Talk About When We Talk About Anne Frank a Jewish re-make of Albee’s very Waspish 1962 play. But I cannot resist the temptation. 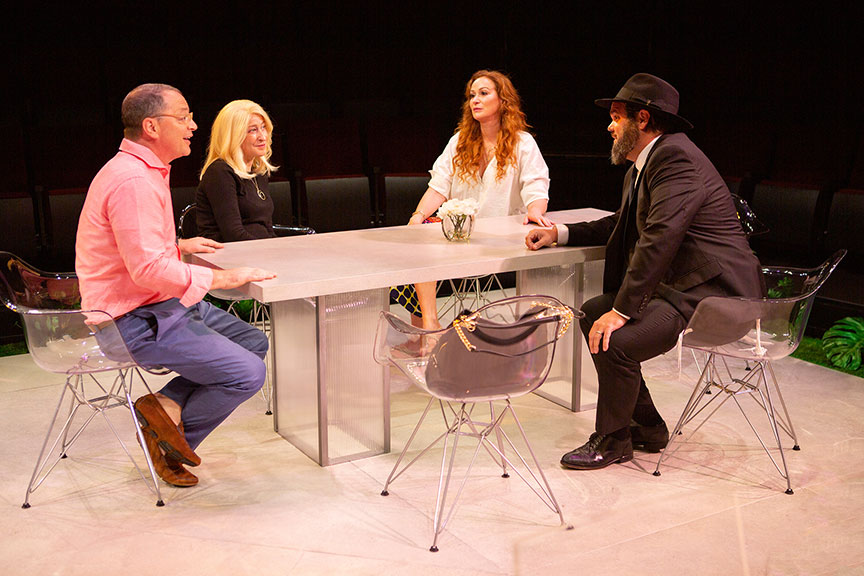 The crux of Englander’s plot is the reunion after some 20 years of two women, Debbie and Lauren, who were best friends in high school. The plot’s tension comes from their contrasting life choices: Debbie and her successful husband Phil are comfortable secular Jews living in their semi-palatial home in Miami, while the visiting couple Lauren—now Shoshana—and her husband Mark are observant, orthodox Jews living in Jerusalem.

In a detail that makes the story appear like a Biblical parable, the orthodox couple has ten pious daughters at home in Jerusalem, while the Miami couple has but one cocky, anti-religious son, who makes an appearance in the midst of the elders’ passionate discussions.

The play’s dialogue centers around which lifestyle is more likely to ensure the survival of Jews. Given Englander’s title, it is hardly surprising that the Holocaust has to dominate both casual conversation and vehement argument. For Debbie, played with anxious elan by Rebecca Creskoff, the subject’s unspeakable horror keeps it just below the surface, inextinguishable and constantly threatening the comfort she and Phil have painstakingly constructed in the lazy Florida sunshine. But for Mark, played with calmly modulated fervor in the performance I attended by Jake Millgard, the Holocaust is the history Jews must move beyond, looking to the future in which a ferocious theocratic Jewish state will make the repeat of such a horrific event impossible.

Supporting her husband’s assertive orthodoxy, Sophie von Haselberg as Shoshana infuses her character’s subservience with unforced delight and uncanny satisfaction. Joshua Malina’s Phil, perhaps the easiest of the roles to pull off, sweeps through the glamorous set with insouciant urbanity, fearlessly dispensing incessant snide remarks and digs. His most outlandish humorous foray is his imaginary Holocaust amusement park to which he supplies a long list of attractions that riff on atrocities associated with the camps. I dare not repeat any of those attractions in this review, lest the review be removed from the internet.

Into this unrelenting verbal tennis match, the adroitly self-possessed Nathan Salstone as son Trevor brings the adults’ bickering to a temporary truce with his absurdist ideas. Professing to be a “Pastafarian,” the teen-age Trevor posits the arbitrary, human invention of every religious system by swearing his ultimate allegiance to the great universal bowl of pasta. While the other adults grimace at Trevor’s mockery, Mark sees his younger self in the lad and tries to reach out to him. When Mark finally secures Trevor’s attention for a few intense moments, he finds himself uncharacteristically at a loss for words, either not knowing what to say to counter the youth’s bravado or perhaps realizing that conversion requires far more than a forceful argument.

Barry Edelstein’s seamless direction keeps his players in graceful but credible motion about Paul Tate dePoo III’s glistening, modernist kitchen set, which is a blessing, because eavesdropping on an hour and forty minute conversation of four people seated around a table would not make a tolerable evening. Katherine Roth’s carefully symbolic attire proves easy on the eyes: a spacious black suit with black hat and kippa for Mark; a floor-length, unadorned black dress for Shoshana graced with a garish, straight blond wig. Since the visit has been made on short notice, Debbie and Phil sport brightly-hued, casual attire that nevertheless comes from tony merchants.

Placing narrow strips of bright green plants along the exterior edges of the set allows the couples to step “outside” to experience a short, unexpected rain shower that blows across their sunny afternoon, a clever bit of realism. Russell H. Champa’s subtle lighting scheme makes the fixtures and clear plastic chairs glisten, while keeping the players in more gentle illumination.

Those who see Englander’s play are unlikely to leave with their minds changed about the evil of the Holocaust or the value of religion. But I believe the playwright wants us to reconsider the question of how we relate to individuals of radically differing points of view, and that is something each of us can actually affect.

Presented by The Old Globe in the Sheryl and Harvey White Theatre on September 29, 2022, “What We Talk About When We Talk About Anne Frank” will continue through October 23, 2022.