Among leaders and board members of performing arts organizations, no word is tossed about with greater avidity than “outreach.” Whether attendance is down, or donations are slacking off, or the brand lacks visibility, greater and improved “outreach” is the inevitable prescription.

On Wednesday and Thursday of this week (October 26 & 27), I attended four events around San Diego to get a sense of what local groups were actually doing to reach out to wider audiences.

Early Thursday morning the Jacobs Music Center downtown was circled by yellow school busses as elementary school students (grades 3-5) and their chaperones streamed in to hear a Burton Family Young People’s Concert by the San Diego Symphony under Associate Conductor Sameer Patel. Of course, the local orchestra has been giving educational programs in their hall for decades, but I wanted to see what one of these programs looked like in our media saturated culture.

Everything about the 50-minute presentation impressed me. Patel chose Igor Stravinsky’s early 20th-century ballet “The Firebird,” breaking this rather long work into short, coherent sections that told a specific part of the Russian folk tale that forms the ballet’s program. Large screens on either side of the stage showed specific instrumental soloists or sections within the orchestra that were not easily visible from the main floor of Copley Symphony Hall: the students could easily see the timpanist pounding out an excited passage or watch a close-up of Principal Oboe Sarah Skuster intone a graceful solo.

Even more visual, costumed members of the San Diego Ballet came out and danced each turn of the story in front of the orchestra, allowing the students to watch the story’s handsome prince, see a dancer represent the magical firebird, and appreciate the lithe princesses from the ballet’s corps. As I looked over the sea of youngsters that filled the hall, they appeared both attentive and engaged.

In the two young people’s concerts that morning, over 2,000 youngsters heard a colorful, well-performed piece of orchestral repertory explained at their level with ample visual reinforcement. These youngsters will not be walking up to the Jacobs Music Center lobby next month to purchase tickets, of course, but these concerts gave them a positive experience of the symphony in its elaborate, 1920s movie palace auditorium that could be the seed that entices them to return when they come of age.

At noon that same day, I walked over to the plaza in front of the San Diego Civic Theatre to take in San Diego Opera’s free Opera on the Concourse recital featuring singers from the company’s current Cinderella production. Like the symphony’s educational concerts, these al fresco noon recitals are not a new venture for the company, but this one had an unusual and enticing component: mariachi music.

Mexican baritone José Adán Pérez, who impressed the Cinderella opening night audience with both his singing and acting prowess as Dandini, the lowly valet who impersonates the Prince, opened and closed this noon recital with traditional the Mariachi songs “Juramé” and “México lindo y querido.” San Diego Opera provided him authentic accompaniment bringing in trumpeter Jeff Nevin, Director of Mariachi Studies at Southwestern College, as well as Rafael Ortiz on vihuela and Eunice Aparicio on guitarrón.

The audience in the plaza ran the gamut from casually dressed seniors and parents with small children in strollers to suited business executives from adjacent office buildings, not to mention downtowners taking a shortcut through the plaza on their way to lunch on Broadway. Pérez’s traditional Mexican songs were a big hit, as was soprano Susannah Biller’s playful coloratura Johann Strauss waltz “Voices of Spring.” Other audience favorites included a lively duet from Rossini’s The Barber of Seville sung by Pérez and tenor David Portillo, the actual Prince in the Cinderella production, and another vivacious bel canto duet from Gaetano Donizetti’s The Elixir of Love sung by Biller and bass-baritone Stefano de Peppo.

Unlike the long-term goals of the San Diego Symphony’s educational concerts, San Diego Opera’s program on the Civic Center Concourse was intended to sell more tickets to its current production that offered two more performances (including a Sunday matinee on October 30) and also to plug—in the single sheet program that was passed out to the audience—the other two grand operas to be presented in the spring of 2017 in Civic Theatre, Verdi’s Shakespearean comedy Falstaff and Verdi’s evergreen tragedy La Traviata.

Wednesday evening in the hall of La Jolla’s St. James Episcopal Church, Bodhi Tree Concerts and the choral ensemble Sacra/Profana offered an unusual preview for press and donors of All Is Calm: The Christmas Truce of 1914. Sacra/Profana Associate Conductor Juan Carlos Acosta conducted a select group of his male chorus members and soloists from San Diego Opera, which is also collaborating in this production, in 30 minutes of music from this play that will be staged November 19 & 20, 2016, at the Veterans Museum at Balboa Park. 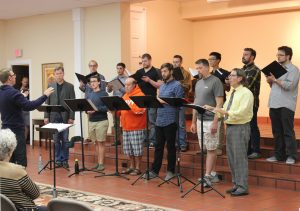 All Is Calm began seven years ago in Minnesota as a radio play by Peter Rothstein with musical arrangements for male voices composed by Erick Lichte and Timothy C. Takach. According to Jacob Bruce, the San Diego actor who is directing this San Diego production, the play was first staged by the Minneapolis company Theatre Latté assisted by the vocal ensemble Cantus. All Is Calm portrays how ordinary soldiers on both sides of World War I converged in a cessation of war on the battle field in Belgium over Christmas Day and actually exchanged gifts and sang to each other.

Among the moving songs Acosta and his singers performed from the play’s 20 musical components were the traditional Scottish ballad “Will You Go to Flanders?” the British popular song “A Long Way to Tipperary,” the French noël “O Holy Night,” and the original Welsh version of “Auld Lang Syne.” In contrast to the typical press conference self-congratulatory speech making, the live choral music proved a more compelling promotion for the upcoming stage performances.

Bruce noted that in some cities, staging All Is Calm has become a December tradition. For this critic, who would rather swallow crushed glass than sit through yet another version of A Christmas Carol, that would be a welcome addition to the San Diego calendar. 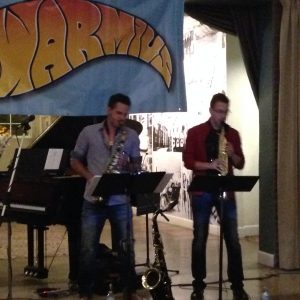 In the lobby of University Heights’ landmark Lafayette Hotel, the contemporary ensemble Swarmius gave a free concert Thursday evening to introduce music that appears on their newest CD “Trans-Classical,” which will be officially released in January, 2017. Fresh from the ensemble’s successful debut at New York City’s cutting-edge music venue the Cutting Room, Swarmius composer and founder Joseph Martin Waters, aka Jozephius, led his ace saxophone virtuosos Todd Rewoldt and Michael Couper through two sets of the ensemble’s inimitable stylistic cocktail of contemporary, jazz, and minimalism interlaced by classical counterpoint.

The audience consisted of college-age students, Swarmius groupies, and the occasional–although slightly astonished–Lafayette Hotel guest strolling through the lobby.