A quarter century has come and gone and How the Grinch Stole Christmas continues on with much merriment at The Old Globe’s Donald and Darlene Shiley Stage, running now through the end of December.

While The Grinch needs little introduction – most are familiar with the story behind the hairy green antagonist who lives atop the mountain by Whoville – it gets one anyway in the musical version, courtesy of narrator Old Max. As the show begins, the wizened and graying canine welcomes the audience to the snowy hilltops, a picturesque pink village below. We meet the titular villain (and his reticent sidekick, Young Max) maligning the carols ringing out across the snow… if only that crabby old Grinch could do something about it – but wait, he can! As the Grinch (Andrew Polec) and Young Max (Tyrone Davis, Jr.) sneak into town to cause mischief, little Cindy-Lou Who (Issa Ally) finds a glimmer of optimism that just might save Christmas.

With 25 years under their belt, it’s no wonder that How the Grinch Stole Christmas at The Old Globe is so well polished. Billed as San Diego’s favorite holiday musical, this iteration is directed by James Vásquez and stars a talented team which includes both veteran players and brand new additions. 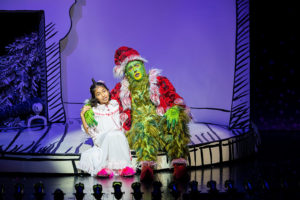 Issa Ally as Cindy-Lou Who and Andrew Polec as The Grinch in Dr. Seuss’s How the Grinch Stole Christmas!, 2022. Photo by Rich Soublet II.

Theatregoers with fond memories of Dr. Seuss’ beloved holiday classic will feel like they are back in their holiday jammies tapping their toes along to “Fah Who Doraze,” but will also enjoy songs original to the musical, thanks to the writing team, Timothy Mason (book and lyrics) and Mel Marvin (music). Set on a stage that is reminiscent of the high contrast visuals in author Theodor “Dr. Seuss” Geisel’s original illustrations and the subsequent film adaptations, the effect of lifting a curtain to a snow-blanketed terrain and drifting snowflakes brings gasps to the many young children sprinkled throughout the theatre. Though an occasional intense fourth wall demolishment by Grinch Polec may have startled a kid or two in the front row and an adult in the fifth one, ultimately I was informed by the 7 year old next to me that I should definitely, “come back again… and bring your children next time!” 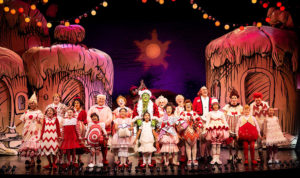 The cast of Dr. Seuss’s How the Grinch Stole Christmas!, 2022. Photo by Rich Soublet II.

And, while I’m admittedly not into whimsy generally, I couldn’t help thinking about how my youngest would love to take pictures in the stand-up photo displays or in front of the pink and red tinsel tree or to pick up a souvenir in the converted Whoville general store gift shop. The Grinch is saccharine sweet, but kids love heaps of silliness and, with this show, a round-up of over-the-top local character actors with tremendous talent are ready to deliver.

In terms of cast, playing across the star power (and sheer energy!) that Polec brings to his role can’t be easy. Polec, as the Grinch, is a delight to experience; there is just no way to describe his dynamic stage presence and skill in portraying the at-turns evil, conflicted, and caring lead with a voice of gold. At turns he startles and charms the audience. His colleagues are up to the task, however, and actually, Steve Gunderson swung on during the production that I saw in the role of Old Max. His performance, like that of Tyrone Davis, Jr. (in the younger version of the character) was wonderful. Both of those actors are possessed of tremendous comedic timing and stellar dance moves/tail wagging. 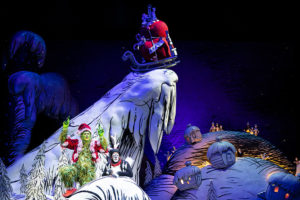 Tyrone Davis, Jr. as Young Max and Andrew Polec as The Grinch in Dr. Seuss’s How the Grinch Stole Christmas!, 2022. Photo by Rich Soublet II.

Additionally, the many adult and adorable youth Whos brought a continued essence of fun and nostalgia to the production, led ably by Ariella Kvashny, Kevin Solis, Bets Malone, and Larry Raben as Mama, Papa, Grandma, and Grandpa Who, and a beautiful, clean Who-chestra conducted by Music Director Elan McMahan. When at last the technical elements were capstoned with snowfall in the aisle, there were audible squeals, and I found myself just as captivated.

The bottom line is that, yet again, How the Grinch Stole Christmas is stealing the hearts of 7 year olds (and at least a few grown-ups). It will doubtless continue to do so through the end of its run at The Old Globe on December 31.