Gambling is not one of my pastimes, but the spunky Carlsbad Music Festival that opened Friday inspired me to take a risk when selecting concerts from its amazingly diverse schedule. So the two evenings I spent at the festival, August 25 & 26, I avoided the established performers I already admire, e.g. Calder Quartet cellist Eric Byers and festival founder, violinist Matt McBane, and chose ensembles and soloists I had never experienced. 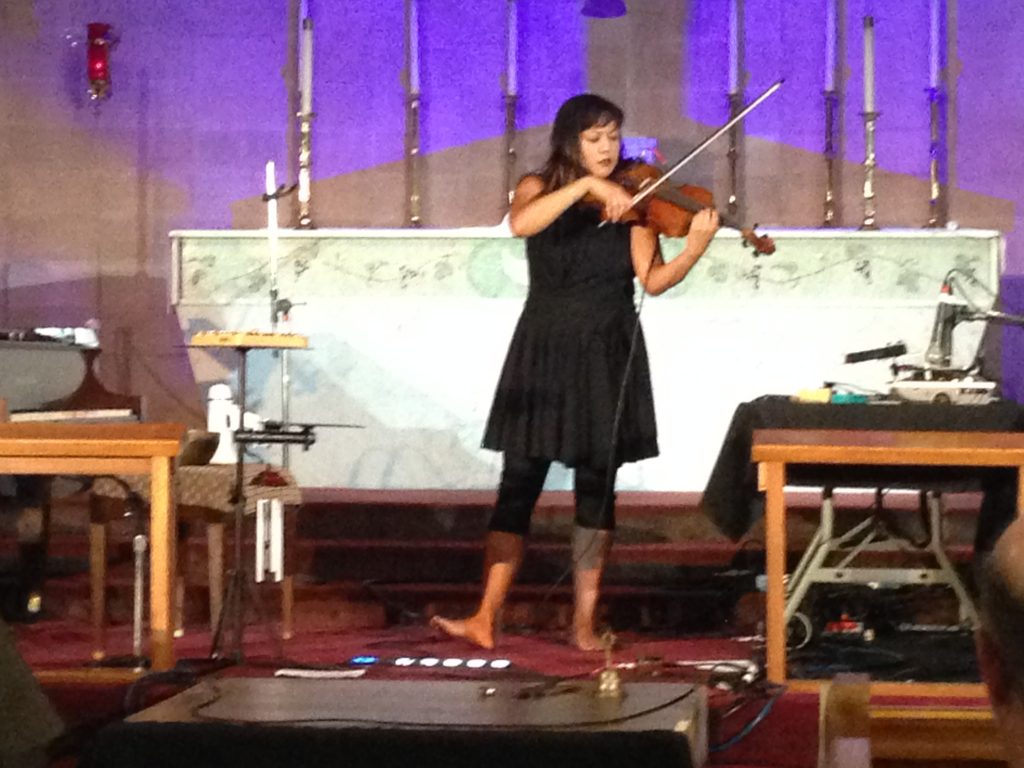 I am happy to report that two-thirds of the performances impressed me favorably, and vocalist-instrumentalist Bora Yoon knocked my socks off, as they say. Although the typical format of a solo recital is a kind of ritual, albeit a highly predictable one, Yoon’s performance unfolded as her own unique ritual, with a recorded ethereal sound cloud that complemented the liturgical surroundings of the St. Michael’s Episcopal Church sanctuary.

Processing slowly up the center aisle, she added her haunting, chant-like vocalise to the low rumble and faint bells of the sound design, which also featured a barely whispered text. When she arrived stage center, in front of the impressive marble altar, she sat down at the grand piano adjacent to the altar and added a gentle nocturne to this collage. And she continued her vocalise, her rich mezzo-soprano voice floating above but not dominating the several layers of sound filling the room.

Continuing the spiritual ethos, Yoon’s next piece—from her aptly titled album Sunken Cathedral—employed viola, which she first used for its delicate pizzicato sounds that she quickly recorded into the computer, placed on a table opposite the piano to the right of the altar. These new sounds made a loop that repeated and grew as she bowed a lithe melody on the viola that soon interwove with another vocalise that could have been on the sound track or sung live–or perhaps both. Part of what made this complex, intriguing piece work was the grace with which Yoon moved and engaged the many sound possibilities at hand and at foot.

She sang a simple strophic ballad, accompanying herself on viola as if it were a guitar; she noted the curious title of the song: “Simple Song.” Her final sound collage ritual brought back the low rumble of her opening piece, to which she added another haunting vocalise. As she infused additional sounds into this melange—a cell phone recording of dogs barking, wind chimes, a small bell, metal rods randomly tossed on a hard surface at the edge of the chancel—I thought of the earliest examples of musique concrête from the 1950s. Once or twice I also thought of those dusty Enya CD’s I have not pulled off the shelf for decades.

But overall, Bora Yoon created a sonically sumptuous experience in the St. Michael’s sanctuary that felt as authentic there as Anglican Evensong. Only I did not doze off during a tedious 30-verse Psalm setting. Yoon engaged the mind, spirit and imagination during every second of her unique rite.

The trio of violinist Andrew Tholl, percussionist Corey Fogel and bassist Devin Hoff offered another performance of unique sound designs, although without so much as a whiff of choreography or visual engagement. Accomplished improvisers, the Tholl/Fogel/Hoff trio overwhelmed Magee Park’s cozy Heritage Hall with a pair of entrancing, abstract works. Their brand of minimalism featured intense iterations at the extremes—the highest range of the violin and the lowest tones of the electric bass, to which Fogel added edgy, nervous drum and cymbal sounds.

Their considerable catalogue of extended instrumental techniques proved inventive, and it goes without saying that all of their sounds were tempered and mixed by electronic manipulation. Unlike Bora Yoon, who engaged the audience with her every motion and glance, these three young guys played with almost complete indifference to their audience, although they accepted applause with self-conscious smiles.

Taken by Canadians, an Oceanside rock group, held forth at the Magee Park Gazebo Friday (August 25), winning enthusiastic approval from their sizable audience and inciting occasional dancing from some of the younger attendees. Guitarist and vocalist Ben Ambrosini kept the energy high with rugged vocals, and I was won over when keyboard player Anna Zinova picked up her violin and added a blazing melodic contribution to the dense guitar textures that Ambrosini and bassist Marco Savoia turned out. Drummer Tristan Faulk-Webster kept everyone together with authoritative percussion. Although Ambrosini did not spell out the individual titles of their pieces, the title of their 2016 CD gives a clear notion of the artistic sensibility of this group: We Eat You Like a Person.

Waiting outside for Bora Yoon’s performance to begin, I heard The Red Fox Tails play the tail end of their set on the St. Michael’s lawn stage.  Their jazz infused pop sound also drew an engaged crowd, and I noted the laudable complexity of their counterpoint as well as J.P. Balmat’s florid solos on both baritone and alto saxophone.

Providing musical accompaniment to classic silent films is an art, so I was eager to hear the Jack Curtis Dubowsky Ensemble accompany the 1920 film The Mark of Zorro, starring Douglas Fairbanks, shown in Magee Park after dark on Friday (August 25). Leading his six-player ensemble from the electric keyboard, Dubowsky proved most adept at coordinating musical snippets with the quickly changing scenes of the story. What the ensemble failed to do was give a sense of dramatic urgency or emotional depth to important scenes, something this creaky silent film sorely needed.

I found Dubowsky’s music overly generic, especially when scenes in the well-appointed households of the Spanish colonials cried out for the rhythms and colors of traditional Spanish dances and ballads. But his percussionist was adept at sound effects.

Los Angeles-based pianist and vocalist Julia Holter offered a selection of her own songs at the Army and Navy Academy Chapel Saturday (August 26). Holter’s dynamic range ran the gamut of loud to excruciatingly loud, and she incessantly pounded the piano like an angry teenager with a serious need of counseling. Given her weak vocal technique and petulant production, perhaps she should find a singer to interpret her vocal compositions.