The return of the Calder Quartet crowned Friday’s opening day of the annual Carlsbad Music Festival. As festival founder and Artistic Director Matt McBane explained to the audience at the pagoda in Magee Park, this now internationally known chamber ensemble performed at the first Carlsbad Music Festival 17 seasons ago. 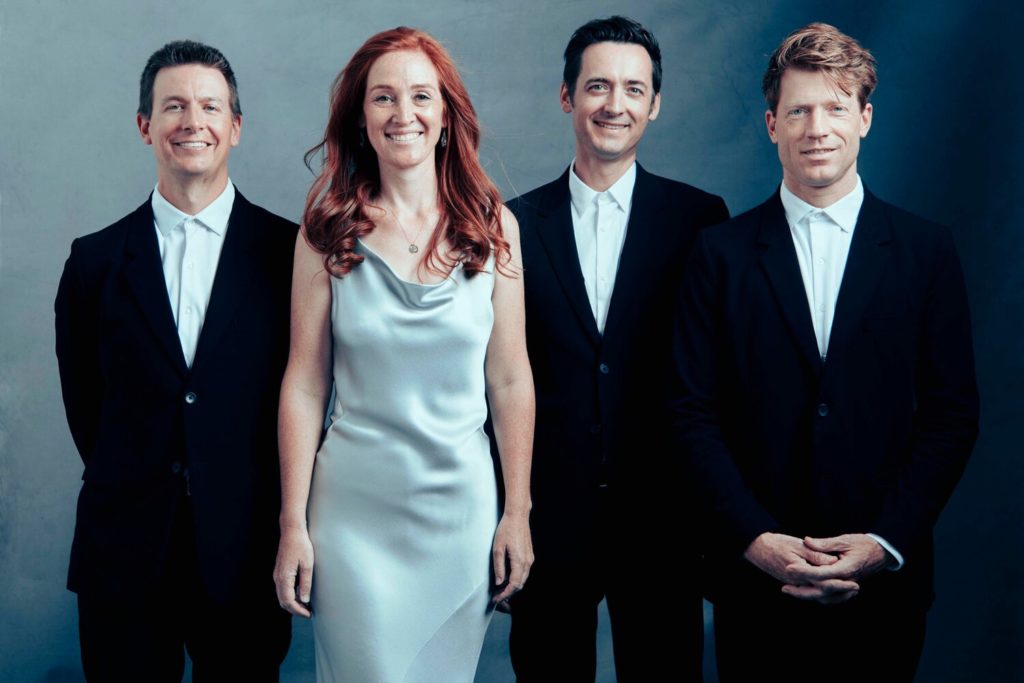 But the Calder connection goes back even earlier—violinist McBane and Calder first violinist Ben Jacobson grew up together in Carlsbad and maintained the connection in their conservatory days when Calder was being formed. According to my records, Calder has not played for the Carlsbad Festival since 2013, although Calder cellist Eric Byers, another North County native, has appeared in the festival with some frequency since then.

The Calder Quartet was slated to perform Gabriela Lena Frank’s string quartet Milagros less than 2 weeks ago at the La Jolla SummerFest 2021, but that program was cancelled at the last minute due to a Covid-19 emergency. So opening their Carlsbad program with Frank’s substantial 2010 work proved a more than admirable compensation for the La Jolla loss.

In the SummerFest program, each of the eight Milagros movements, called Milagritos (“little miracles”), has a picturesque title, but since the Calder program on Friday was only announced by Jacobson, he did not give the specific title of each Milagrito. In retrospect, this was a kind of advantage, since we listeners did not spend time trying to “find” the programmatic aspect of every movement, but simply heard each movement as a purely musical moment.

Calder second violin Tereza Stanislav brought her fierce, vibrant technique to the first Milagrito, an extended solo that unfolds as a series of athletic flourishes. In the second Milagrito, the full quartet bursts forth in strident, close harmonies, the perfect opportunity to relish Calder’s rich ensemble sonority, although since this was an outdoor performance surrounded by at times jarring traffic noise, the quartet needed to be amplified—even for the modest-sized audience seated on the green in front of the pagoda—giving a bit too much edge to their customary velvet blend. A couple of Milagritos exuded infectious dance rhythms—consulting the SummerFest program, I learned that movements four and seven have dance in their titles—while others glowed with high, suspended pedal tones and close intervals, suggesting mystic contemplation.

In Frank’s La Jolla program notes, we learn of the composer’s many travels through Peru, her mother’s native country, and certainly it is possible to hear Milagros as a spiritual pilgrimage. But with or without such a program, Frank’s richly textured, imaginatively structured quartet moved me as few works of this century have, and I cannot think of an ensemble I would rather hear interpret it than Calder.

Two movements of the 1950 John Cage String Quartet—yes the guru of prepared piano and what became a ubiquitous party joke 4’33” wrote rewarding string quartets—seemed to attract ambient sounds, including an ambulance siren and then a blaring horn from the Amtrak rushing through Carlsbad only a half mile from Magee Park. What could be more Cage-like?

Two shorter compositions by the Hungarian composer György Kurtág, transcriptions from his piano works, displayed his customary static but shimmering textures and a subtle use of extended instrumental techniques. Another gem of deliciously astringent chordal progressions from 1960 by the late, under appreciated British composer Daphne Oram and a perceptive Variation Cycle by the Swede Anders Hillborg that offered Calder violist Jonathan Moerschel an expansive solo turn, added gravitas to the concert, both engaging and delighting the Magee Park audience.

Earlier in the evening, the Charlie Arbelaez Afro-Cuban Sextet provided a sophisticated sampling of this ensemble’s heady blend of straight-ahead jazz infused with unrelenting Latin dance rhythms. Virtuoso soloists trombonist Matt Hall, keyboard guru and music director Irving Flores, and saxophonist Arbelaez dazzled the audience on the St. Michael’s-by-the-Sea Episcopal Church lawn, where the festival’s main stage was set up. The Sextet mainly played their own compositions and arrangements, although their take on Dizzy Gillespie’s classic “A Night in Tunisia” surely must have pleased traditional jazz enthusiasts present.

Popular San Diego singer and song-writer Jason Diaz offered compelling performances of a well-chosen selection of his own works, including the popular “Don’t Be A Stranger.” His fluent guitar accompaniments and rock-steady rhythms contrasted nicely with his laid-back lyrics. For aficionados of hard driving rock at elevated volume, the duo Parque de Cometas from Tijuana filled that bill with brio.

The Carlsbad Music Festival, based on the campus of St. Michael’s-by-the-Sea Episcopal Church, 2775 Carlsbad Blvd., continues through Sunday, August 29, 2021.