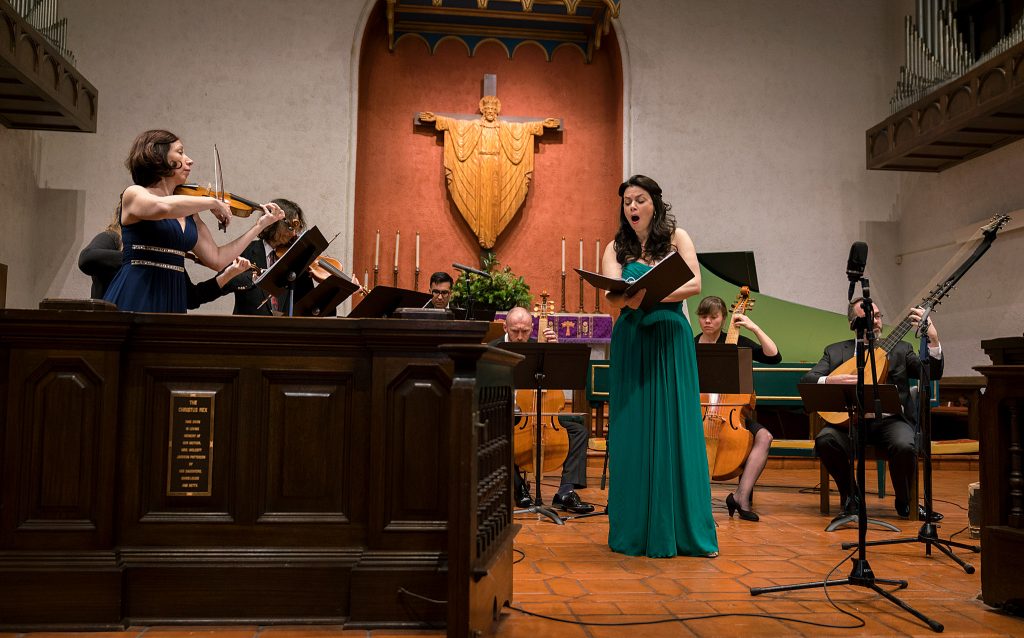 Bach Collegium Artistic Director Ruben Valenzuela wisely opened his program with “O Fröliche Stunden,” a spirited solo cantata by Dietrich Buxtehude, an organist and composer from whom we are certain Sebastian Bach took direct influence. Any piano student who has learned so much as a Bach two-part invention has been told the saga of how the 20-year-old Bach asked the church fathers in Arnstadt for a four-week leave from his organist duties to hear the celebrated Buxtehude’s music in the wealthy Hanseatic city of Lübeck. Much to the consternation of his employers, Bach stayed in Lübeck for four months, taking in the city’s rich concert life that Buxtehude oversaw.

Choral directors and singers who only know the pious Lutheran choral music of Andreas Hammerschmidt no doubt chuckled at his humorous strophic song “Kunst des Kussens” (“The Art of Kissing”), a musical primer on an activity not usually associated with ecclesiastic devotion. And Adam Krieger’s “Der Rheinsche Wein,” struck me as an early commercial for the salubrious aspects of Rhein wine, a piece unlikely to be played for a 12-step social.

Among the instrumental offerings, a brisk, multipartite Canzona by Samuel Scheidt and a straightforward version of the now ubiquitous Johann Pachelbel Canon in D with its rarely heard Gigue displayed the Bach Collegium’s signature instrumental sonority, a bright edgy string sound built on a robust basso continuo foundation that included harpsichord, chamber organ, archlute and cello.

A sacred solo cantata attributed to the Bohemian-Austrian composer Franz Biber, “O dulcis Jesu,” gave Snaidas the opportunity to engage in tasteful ornamentation and delicate echo effects. Andrijeski bloomed in the instrumental interludes and was gifted with a fiery cadenza in the final ritornello that even Fritz Kreisler might have eagerly purloined and called his own.

Nearly every vocal piece revealed the bright shimmer of Snaidas’s uppermost range, which only grew in strength and luster as she ascended, but none was as compelling as the program’s sole opera aria, “Betrübter Geist” from Reinhard Keiser’s 1699 opera Hercules und Hebe.

Valenzuela and company closed the program with a tongue-in-cheek aria from Johann Sebastian Bach’s Coffee Cantata, BWV 211, in which Snaidas was able to declaim in mock protest that while she enjoyed her evening coffee, a randy husband would be a more appreciated nightcap.

Whether or not all of the composers featured on this ample program actually served as muse to the great Leipzig cantor is a topic on which musicologists could speculate at length. What is not up for debate, however, is the profound pleasure the Bach Collegium’s sophisticated and polished performance brought their audiences.