Rising tenor superstar Pene Pati may not have yet appeared on the cover of the widely read Opera News magazine, but when he does, no one will be surprised. Currently rehearsing the role of Roméo in San Diego Opera’s upcoming production of Charles Gounod’s Roméo et Juliette, Pati is one of today’s most in demand tenors. 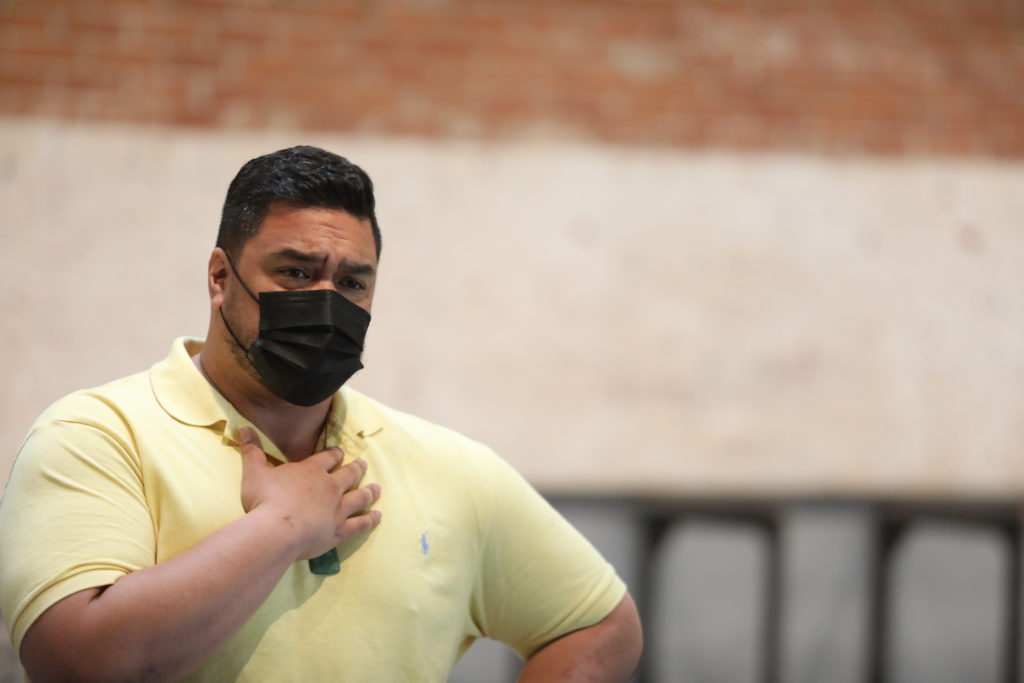 On his crowded spring performance schedule, he is sandwiching San Diego Opera in between gigs at the Vienna Staatsoper, the Théâtre des Champs-Elysées in Paris, and Berlin’s Staatsoper Unter den Linden. As they say—nice work if you can get it!

Since Pati is sometimes called the Samoan tenor but is also frequently described as a New Zealand singer, I asked him to clarify this apparent confusion.

“I was born in Samoa, but when I was two years old, my family moved to New Zealand, so you can say I am a Samoan-born Kiwi,” Pati explained, employing the typical slang the New Zealand natives use to describe themselves.

Growing up, Pati was immersed in music, but certainly not opera.

“My family was filled with country music—my dad loved Rod Stewart—and Gospel music. We were very religious and went to church three times a week. When we sang, my dad would accompany us on the guitar, and I joined the church choir at an early age.”

Pati continued to sing in choirs, and in his early teens, when other boys’ voices were changing and dropping down into the typical male range, Pati was apprehensive.

“I had this high boy soprano voice, and even though my friends’ voices would suddenly drop down an octave, I desperately wanted to keep all of my high notes.”

In college, Pati continued to sing, but did not consider music as his future profession, so he majored in science. His college choral director had a clever scheme, however, to change young Pati’s mind about his future career.

“My choral director ticked me into taking a voice class: I thought I was auditioning to sing in the choir, but it turned out to be an audition for a voice class. He was the one who got me to change my major from science to music.”

To support financially Pati’s advanced musical studies in Wales, in 2012 Pene, his brother Amitai, and his cousin Moses Mackay formed a vocal trio they called Sol3Mio, a pun on that traditional Neapolitan song “O sole mio” that tenors have been crooning for ages. From the trio’s first public concert, Sol3Mio gained a large following, was quickly signed by Universal Music, and their first recording went platinum in New Zealand. Their style of music was instantly described as operatic pop.

“We wanted to introduce opera to a wider audience in New Zealand, so at first we would take a poplar song and make it operatic. We also included musical selections from opera, which we did not want to dumb down in any way.” Although the musical careers of the three Sol3Mio singers have grown and followed different paths, the trio continues to perform together when they can make their schedules align.

Like many young singers, Pati turned to opera competitions and racked up a number of successes, including First Prize in the 2014 Montserrat Caballé International Aria Competition and Second Prize and the coveted Audience Prize in Placido Domingo’s 2015 Operalia held at London’s Covent Garden.

His biggest break came in 2017, his second year as an Adler Fellow with San Francisco Opera, when then General Director David Gockley cast him as the Duke of Mantua in the company’s production of Verdi’s Rigoletto.

The reviewer from Opera Today wrote of that performance, “Ingénu tenor Pene Pati is purely and simply the vocal embodiment of the Duke of Mantua, possessing the vocal swagger, the freshness of voice, and the creative energy that makes the Duke, indeed all youth, lovable.”

In 2019 San Francisco Opera provided Pati another triumph as Roméo in that company’s season opening production of Gounod’s Roméo et Juliette. Just days before opening night, scheduled tenor Brian Hymel dropped out of the production’s title role, and Pati, who had been covering Roméo for the company, took over. The headline in the San Francisco Chronicle review the following day could not have been more explicit: In SF Opera’s ‘Romeo” the Tenor Understudy Walks Off with the Show.

The Chronicle’s respected senior music critic Joshua Kosman wrote, “Pati’s got a vigorous, full-bodied sound with a lustrous mid-range and glorious, perfectly placed top notes, including one long-held stratospheric closer that would have sounded like showboating if it hadn’t been so magnificent. He sings in a gleaming, sensuous stream of sound, with heroic accents in more athletic passages and a warm, tenderly inviting depth for moments of romantic intimacy.”

When I asked Pati where he now makes his home he couldn’t name a city. He described himself and his wife, the operatic soprano Amina Edris, as “singing nomads.”

“We are each living in a different place every six weeks, so we put all of our belongings in storage in San Francisco. We get together to plan our schedules so we have time together in the same place. I have certainly learned the truth to that cliché ‘absence makes the heart grow fonder’.”

The San Diego Opera production of Gounod’s Roméo et Juliette will be presented in San Diego Civic Theatre on March 26 & 29 and April 1 and 3, 2022.