At the Martin Lawrence Galleries’ Saturday (April 2) opening featuring art by Picasso, Chagall, Miró, and Dalí, the intrepid Swarmius ensemble performed a dozen works by Joseph Martin Waters while patrons took in the exhibition, discussed art, and even made some very upscale purchases. 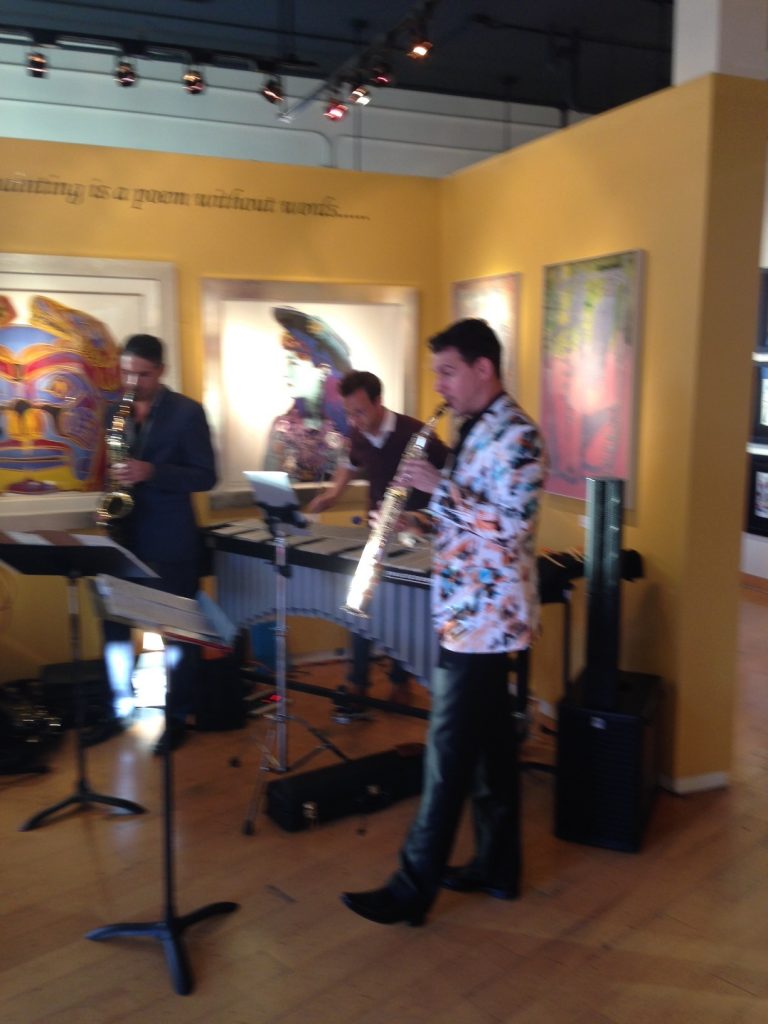 The scene revealed La Jolla at its best: art both visual and aural commingling with a lively social scene; curious tourists strolling up Prospect Street attempting to discern the scene, and sales associates busily circulating eager to close a deal. Fortunately, the music Swarmius played—like the Serenades written by Mozart—functioned on two levels: ample complexity and engagement for those willing to listen closely and an equal portion of animated ambient music to lubricate the social affair.

Swarmius in its most compact traveling configuration—Todd Rewoldt on alto sax, Michael Couper on soprano sax, Andrew Kreysa on vibraphone, and the composer at the computer—opened with two of its more buoyant, kinetic repertory standards “Cali Karsilama” and “Dragon.”

A work listed on the program as “EeOoEe” turned out to be the latest evolution of Waters’ grand deconstruction/reconstruction of of J. S. Bach’s Organ Toccata in D Minor, BWV 565, which Waters wrote for a large chamber ensemble (including piano, pipe organ and voices) for the 2013 NWEAMO Festival. The “EeOoEe” of the new title represents the sound of the vocalized mordent, sung in falsetto by Rewoldt, that famously begins the toccata. As Waters toyed with Bach’s clever rapid riffs, the two saxophones frequently assumed dueling roles, with Kreysa’s fleet mallet work and the magic of Waters’ computer holding the explosive piece together.

Many great composers, including Franz Liszt, Ferruccio Busoni, and Igor Stravinsky, have been attracted by Bach’s keyboard works and have reworked them in their own idiom. Waters continues this tradition, bringing the Leipzig master into the 21st century with edge and wit.

Waters’ new acoustic piece, “Cherry Blossoms,” completed only days before this performance, evoked that big band nostalgia that Waters exploited so creatively in his recent orchestral work “Suite Noir.” A slow ballad constructed from gentle three-note motifs that slowly expand into more persuasive themes, “Cherry Blossoms” needs only a romantic text to send it soaring on the pop charts. Another piece that brushed against the popular idioms of the last century, “Icicles in Starlight,” Waters himself described as “Henry Mancini meets Stravinsky.”

Having the extreme virtuosity of Rewoldt at his disposal, Waters wrote “Labyrinth of Leaves” as a brilliant, complex etude for tenor sax complemented with digital sonic effects. So when does Rewoldt get his own Saxophone Concerto?

Appropriately, Waters chose his “Pacific 565 Fugue” as the group’s postlude to this gallery opening event. “Pacific 565,” Waters’ reconstruction of the Bach D Minor Fugue that goes with the D Minor Toccata, is even more over the top than Bach’s own flashy coda to the original fugue. In Bach’s time, this wild style was called the stylus phantasticus, and certainly there are few ensembles today better equipped to handle virtuoso fantastic music than Swarmius.