At the heart of Lin’s program, Soprano Ying Huang gave a striking, passionate account of Rachmaninoff’s familiar “Vocalise,” with Jeffrey Kahane deftly assisting at the piano, and an emotionally charged interpretation of Heitor Villa-Lobos’ “Bachianas Brasilieras No. 5 for Soprano and Eight Cellos.” With a radiant voice of considerable power throughout her range, this confident singer from Shanghai balances the drive of a dramatic soprano with the warmth of a spinto.

Her operatic command projected a playful yet ardent “Dança,” the vivacious, infrequently performed second movement of “Bachianas Brasilieras No. 5.” I admired her dreamy approach to the oft-recorded “Aria,” although in its declamatory middle section I wanted her to convince me that she was actually singing about the “cruel tears and bitter dejection,” that the Portuguese text intones. Does it appear churlish to mention that her final pianissimo high “A,” which the composer cruelly requires the singer to hum, was under pitch?

Nevertheless, Huang, who made her Metropolitan Opera debut in Mozart’s The Magic Flute in 2009, was a welcome addition to the opening night roster. 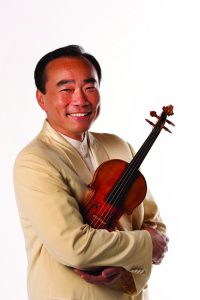 In recent years, it has become customary for Lin to perform in the opening concert, so with violinist Augustin Hadelich (a SummerFest favorite) he inaugurated SummerFest 2012 with Moritz Moszkowski’s exuberant “Suite in G Minor for Two Violins and Piano,” Op. 71. These two violinists could not have been more sonically matched—unlike Lin’s last season’s opening duo with Jaime Laredo—nor more perfectly attuned to Moszkowski’s overripe melodic contours.

Their pensive, graceful playing of the Lento assai movement hinted at the deeper thoughts to which Moszkowski aspired, even when his natural inclinations bloomed in the more perfumed style of salon music. The young pianist Henry Kramer accompanied Lin and Hadelich with an unfailingly pellucid touch, and he seamed quite at home in this extravagant late Romantic idiom. He is a member of the Newbury Trio, which will perform later in the festival.

The eight cellists who assisted the soprano in the “Bachianas Brasilieras No. 5” also treated the opening night audience to Villa-Lobos’ “Bachianas Brasilieras No. 1 for Eight Cellos,” a compact, three-movement instrumental opus that explores the compser’s life-long devotion to Latin American folk music and Baroque counterpoint. Under the fleet leadership of first cellist Desmond Hoebig, who offered several sweet, shapely solos, the cellists enthusiastically attacked the folk dance-inspiried opening movement and provided equal verve for the four-voice fugue of the final movement. I can imagine, however, the cello section of a good orchestra giving greater unanimity to the linear aspects of this work.

When pianists Jon Kimura Parker and Jeffrey Kahane launched into Sergei Rachmaninoff’s “Symphonic Danses,” Op 45, I was filled with a rush of enthusiasm. When the composer wrote “Symphonic Danses,” his final orchestral opus, he first composed it as a two piano work, then later filled out the actual orchestration.

As Parker and Kahane applied their adroit piano skills to the first movement, the advantages of this version became immediately apparent: the pianists easily brought out the composer’s laudable linear construction and a gentle, rocking minimalist harmonic palette, aspects of the orchestral version I had noted less distinctly. As the lead piano, Parker boldly captured the work’s grand statements with pianistic bravura and calm assurance, while Kahane’s role was more supportive. I cannot fault their realization of the score.

But as “Symphonic Danses” moved into the middle movement, Tempo di valse, this two piano version only revealed the paucity of ideas the composer brought to the table, a factor his adept orchestration hides quite effectively. As the “Symphonic Dances” came to its conclusion, I was yearning for the colorful sweep and mighty surge of the full orchestra that makes this work beloved by orchestra audiences everywhere.