Thursday’s SummerFest 2021 program at The Conrad brought the long-awaited première of Tamar Muskal’s Facing the Automaton, commissioned by the La Jolla Music Society and performed with virtuoso percussionist Steven Schick as soloist. The most unusual facet of this large concerto-like work for 10 instrumentalists was the inclusion of visual artist Daniel Rozin’s kinetic sculpture, Wooden Mirror, a large installation whose face of tilting wooden tablets reflects the movements of a person standing directly in front of the mirror. Since these tilting tablets make a slight percussive sound as they move, Wooden Mirror, which is the Automaton of the title, can also be programmed to present a progression of predetermined patterns, so Muskal has employed Wooden Mirror as part of her sonic picture. 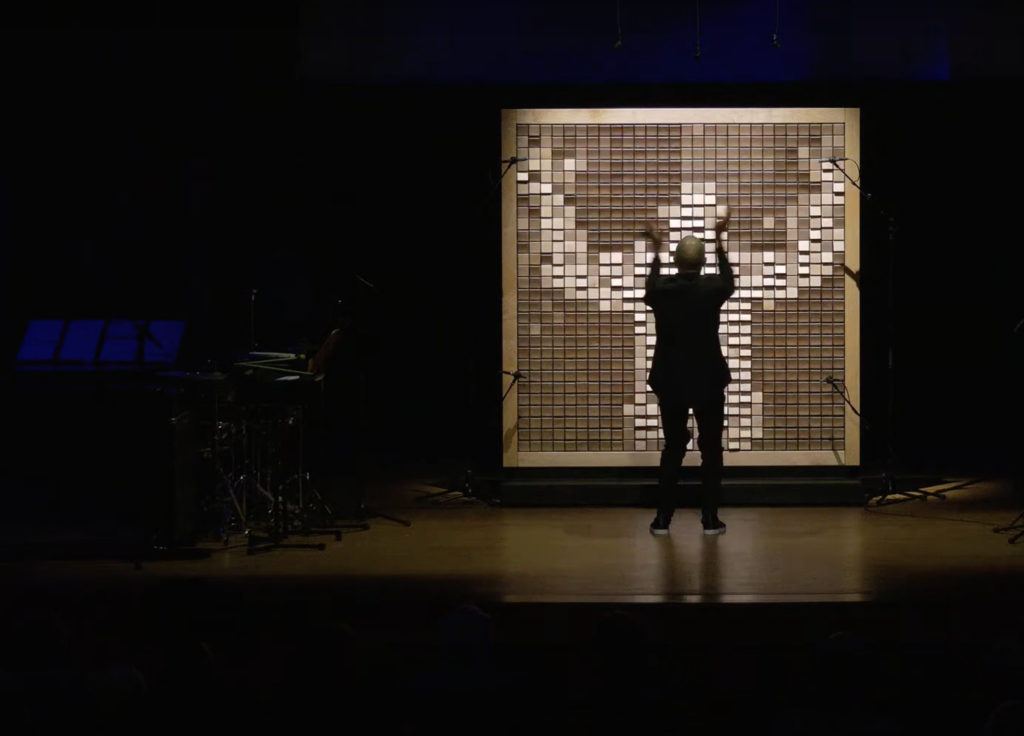 Muskal’s opening movement unfolded like a conventional chamber concerto, with Schick executing bright, bold themes on vibraphone, athletic drumming, as well as malleting vibrant flourishes on the marimba in opposition to densely layered themes and motifs from the five strings, three winds, and piano on the opposite side of stage, playing in a style that might be described as Edgar Varèse on steroids. For the second movement, an extended solo for Wooden Mirror, Schick engaged in a host of poses in front of the machine, more like a clever party trick or watching a gaggle of teens in their first encounter with a carnival’s house of mirrors.

The rousing finale giddily combined of all these elements on stage, including Wooden Mirror convulsing with quickly changing, rippling patterns as the tablets clicked away. After a 20-minute delay before the work to repair last-minute defects in the work’s electronic appliances and the 21 minutes spent hearing Facing the Automaton, I thought the return on our significant investment of time proved far too modest. Perhaps the fervent applause at the end of the work reflected relief as much as it indicated approval.

Ernest Chausson’s lush Concerto for Violin, Piano and String Quartet, Op. 21, has proved an irresistible choice for SummerFest Music Directors. In 2018, Music Director and violinist Cho-Liang Lin was joined by guest pianist Orion Weiss is a sterling performance of this opus, so what could be more appropriate in 2021 than Music Director and pianist Inon Barnatan asking frequent SummerFest guest violinist James Ehnes to join him in the Chausson Concerto?

Like the 2018 soloists, Barnatan and Ehnes, a familiar concerto soloist with both the San Diego Symphony and the Mainly Mozart Festival Orchestra, brought out the passion and finesse of Chausson’s beloved chamber concerto. Ehnes’ panache suited the grand gestures of the composer’s late Romantic style, and Barnatan’s impressive technique delivered the demanding piano part with dazzling precision. With the fleet and powerful first violinist Geoff Nuttall, a member of the St. Lawrence String Quartet, leading the strings, the soloists received unabated support and collaboration. The other strings players were violinist Tien-Hsin Cindy Wu, violist Ori Kam, and cellist Paul Watkins.

This program opened with the rarely heard Mozart’s Grande Sestetto Concertante in E-flat Major, an uncredited early 19th-century chamber arrangement of Mozart’s Sinfonia Concertante for Violin and Viola, K. 364. The arranger skillfully distributed the composer’s abundant cache of thematic riches to all six players, not just to the violin and viola of the original work, making the Grande Sestetto a highly rewarding chamber offering.

This concert was presented by the La Jolla Music Society in the Conrad Prebys Performing Arts Center in downtown La Jolla on Thursday, August 19, 2021. SummerFest 2021 concludes Friday, August 2o, 2021 in the same venue.