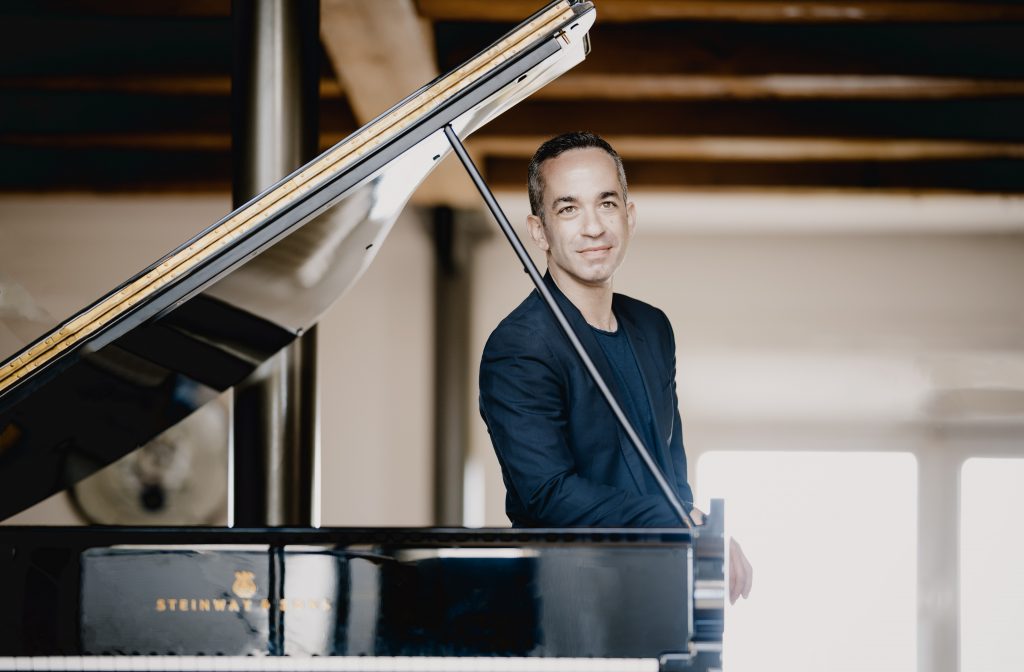 SummerFest Music Director Inon Barnatan and newcomer Roman Rabinovich sat down at matching Steinways to offer an opening fanfare, Franz Liszt’s arrangement of the “Ode to Joy” theme from Beethoven’s Ninth Symphony. Before music lovers had access to Edison cylinders, vinyl LP’s, CD’s, and mp3’s, Liszt’s piano transcriptions provided the only vehicle for ordinary households to access Beethoven’s great symphonic library, and the duo’s vigorous account of this four-minute symphonic excerpt launched both the evening and the festival on a joyful note.

Barnatan explained that most of the selections of the program were pieces that had special meaning to individual performers, which led to some unusual choices. Violinist Paul Huang, for example, played Fritz Kreisler’s schmaltzy arrangement of “Londonderry Air,” and Barnatan chose Edvard Grieg’s two-piano arrangement of Mozart’s best-known piano work, the C Major Sonata, K. 545. Has any piano student not essayed the opening movement of this Mozart sonata?

Taking the primo part, Barnatan gave us Mozart’s original score, a nuanced interpretation propelled by his crystalline technique, while Rabinovich supplied Grieg’s enhancement of the original–swooning countermelodies that infused Grieg’s late-Romantic harmonic palette into Mozart’s sterling classicism. Like the Swingle Singers’ jazzy vocal interpretations of J. S. Bach’s familiar works, Grieg’s retrofit of Mozart’s beloved piano sonata has the potential of amusing those who search out the novel but irritating purists. I was happy to make the acquaintance of this charming Grieg work, although I probably will not seek it out again soon.

With Barnatan’s assistance at the Steinway, cellist Alisa Weilerstein gave an emotionally probing account of Manuel De Falla’s Suite Populaire Espagnole, an uncredited adaptation of his esteemed 1914 song cycle Siete canciones populates españolas (seven popular Spanish songs). I expected that the cello would take over the vocal line, which Weilterstein did with her customary aplomb, but I was surprised when the cello also added to the texture of some of the songs’ extensive piano introductions. Weilerstein’s pizzicato obbligatos in the opening sections of the lively songs “Jota” and “Polo” proved captivating, and Barnatan’s masterful account of the bravura piano part throughout, full of the rasgueado techniques favored by Spanish guitarists, made this a high point of the evening.

Another showpiece, John Adams’ “40% Swing” from Road Movies, a seven-minute tour de force for piano and violin, suggested a barreling sound track for an action movie. SummerFest newcomer violinist Blake Pouliot dashed off Adams’ wild, angular themes with authority, and Rabinovich equaled his fiery prowess. The title is too technical to explain in a review, and I remain uncertain as to what this piece is about, but “40% Swing” was the thrill-a-minute roller coaster in Friday’s musical amusement park.

After intermission, although from my point of view we had already experienced a complete, balanced program, members of the Calidore String Quartet—Jeffrey Myers, Ryan Meehan, Jeremy Berry, and Estelle Choi—joined Jan Iwasaki, Jonathan Vinocour and Huang and Weilerstein in Felix Mendelssohn’s Octet for Strings in E-flat Major, Op.20.

One of Mendelssohn’s earliest successes—he finished the Octet at age 16—this work is a chamber music staple. Admired for its polish and structural brilliance, it is played with frequency, although I have never found that repeated hearings of the Octet reveal any secrets. Friday’s performance was more robust than polished, although the elfin character of the Scherzo came across with elan.

This SummerFest 2021 concert was presented by the la Jolla Music Society at the Conrad Prebys Performing Arts Center in downtown La Jolla on Friday, July 30, 2021. The festival continues in La Jolla through August 20, 2021.