For his second year as La Jolla SummerFest Music Director, Inon Barnaton had planned a blockbuster three-week festival for 2020 that would involve some 80 musicians. Titled “Self + Sound,” Barnatan’s ambitious programming even included Mark Neikrug’s recent chamber opera A Song by Mahler. 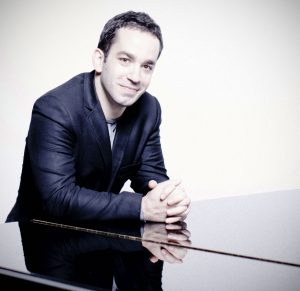 By mid-spring, the suspension of all public performance because of the pandemic made such a festival impossible, so Barnatan and the La Jolla Music Society announced that the 2020 SummerFest would be rescheduled to 2021. For this summer, six modest chamber concerts would be offered online from The Conrad Prebys Performing Arts Center in La Jolla by a few musicians in residence, and the first concert was presented Friday (August 21).

Franz Schubert’s String Quintet in C Major, D. 956, an expansive chamber work filled with mellifluous melodic invention, proved a bankable programming choice, although Barnatan opened his program with Charles Ives’ “Unanswered Question” from 1935, a short essay for a good-sized chamber orchestra that once seemed daring, but whose momentary dissonant splashes sound almost quaint given the far more adventurous orchestral music that has emerged since Ives finished his work.

“The Unanswered Question” was assembled prior to Friday’s concert, with each guest musician from around the country playing their part at home. The one screen during “The Unanswered Question” that showed a few string players on the Baker-Baum Concert Hall stage joining with the scattered musicians in their individual Zoom boxes behind them gave a reasonable visual symbol of this sort of remote ensemble performance.

This account of the Ives proved suitably eerie, with hushed, mysterious strings offset by piquant, insistent woodwinds and Ives’ soaring musical “question” posed by the Los Angeles-based trumpeter David Washburn. Whether the trumpet player seen on the screen–at various San Diego waterfront locations–was Washburn could not be determined since all the shots were taken from behind the player. In any case, Washburn’s burnished sonority and gentle phrasing embodied the composer’s intended equivocation.

San Diego audiences are accustomed to hearing violinist James Ehnes and cellist Alisa Weilerstein as impressive soloists in orchestral concertos, so it was rewarding to see them as 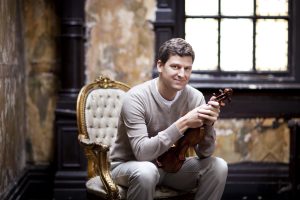 first violin and first cello in this Schubert quintet. With their colleagues, violinist Tessa Lark, violist Yura Lee, and cellist Clive Greensmith, they gave a polished and deeply reflective account of one of Schubert’s beloved valedictory works.

I was most impressed by the performers’ Scherzo, marked presto, hurtling its bristling, hunting-horn themes back and forth without sacrificing the glistening sheen of their ensemble, yet pacing the hymn-like slow progressions of the Trio with calm dignity. The Quintet’s long opening movement—Schubert lovers never tire of extolling his “heavenly length”—benefited from the players’ elegant transitions as the composer transformed and renewed his themes in contrasting tempos. The final movement danced joyously thanks to the performers’ insightful rhythmic acuity and elegant phrasing.