From my earliest childhood years, the one stern parental directive I can never forget is, “Don’t accept candy from strangers!” My mother sternly decreed this ironclad precept—it allowed no exceptions—although the consequence of breaking the rule remained a purposely undefined sense of danger.

The traditional “Hansel and Gretel” fairy tale has long served as a cautionary story vividly depicting the danger of children accepting favors from strangers whose intentions are harmful to the point of life-threatening. When the Grimm brothers, early 19th-century German folklorists, published the tale, this was indeed their interpretation, although historians claim that the earliest stages of “Hansel and Gretel” came from 14th-century stories of child abandonment during times of famine. 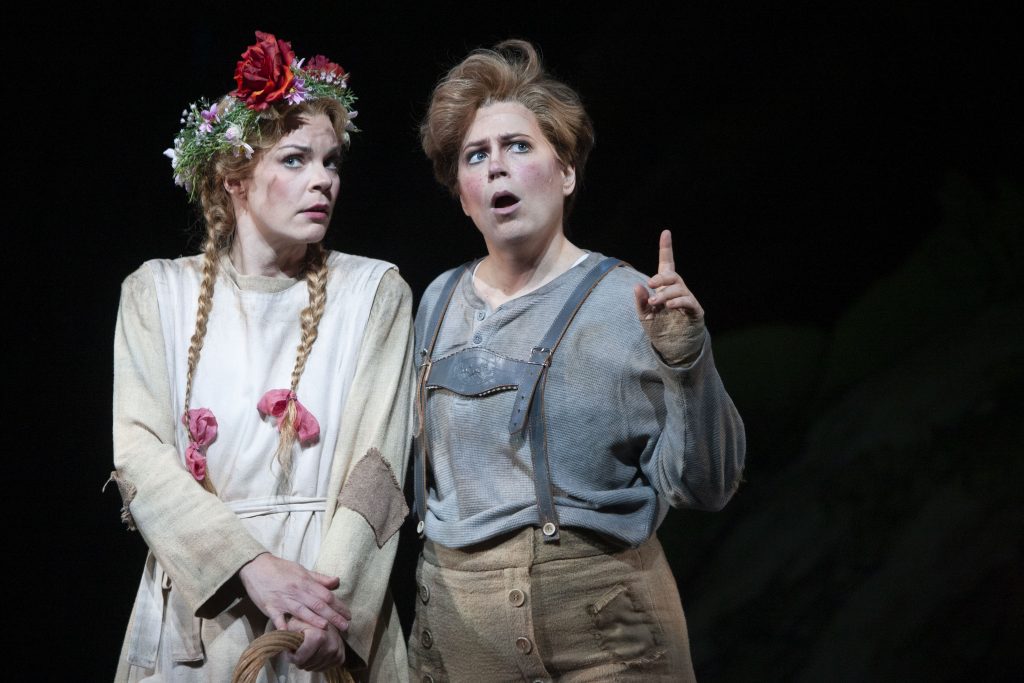 A production oiginally staged by Vancouver Opera with scenery, puppets and costumes designed by The Old Trout Puppet Workshop, this Hansel and Gretel filled the Civic Theatre stage with actors costumed as wild forest creatures by day and as ghostly spirits and flickering will ‘o the wisps at night. Other actors waved large, colorful bird puppets on long poles, “flying” them through the forest in which Hansel and Gretel become lost or “nesting” the birds on high tree branches to call to the frightened children below. Humperdinck’s orchestral score usually bears the burden of depicting these birds, beasts, and spirits, but the workshop’s vivid incarnation of these participants gave them splendid physical reality. 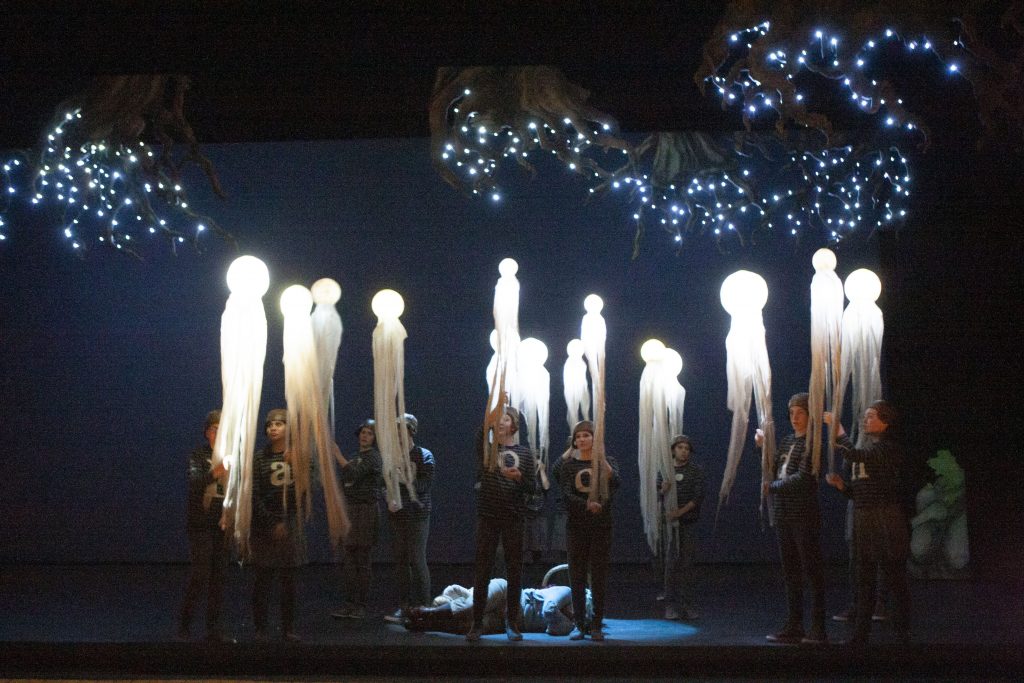 San Diego Opera General Director David Bennett assembled a solid vocal cast, including singers who have become welcome regulars in the company. Sara Gartland, who sang Musetta in the the 2015 La bohème, used her clear, bright soprano to portray a pert, sincere Gretel, the classic wiser older sibling. The warmth and power of Blythe Gaissert’s mezzo-soprano—she sang Hannah After in the 2017 chamber opera As One—gave Hansel an aptly rambunctious younger brother characterization. Malcolm MacKenzie has appeared in a dozen San Diego Opera productions, but he is emblazoned in my memory as the vocally and dramatically imperious Sergeant Belcore in the 2014 production of The Elixir of Love. His opulent, ruddy baritone gave this opera’s Peter—the children’s caring father—bold authority and easily communicated his unalloyed affection. Joel Sorenson has appeared with the company almost as many times as MacKenzie; most recently he was Pong in the lavish 2018 production of Turandot. The keen edge of Sorenson’s supple tenor gave the Witch appropriate menace, although a bit more dynamic prowess would have made him even more frightening. Fortunately, his costume, with a significant assist from his shadow puppet, created an astonishing impression. 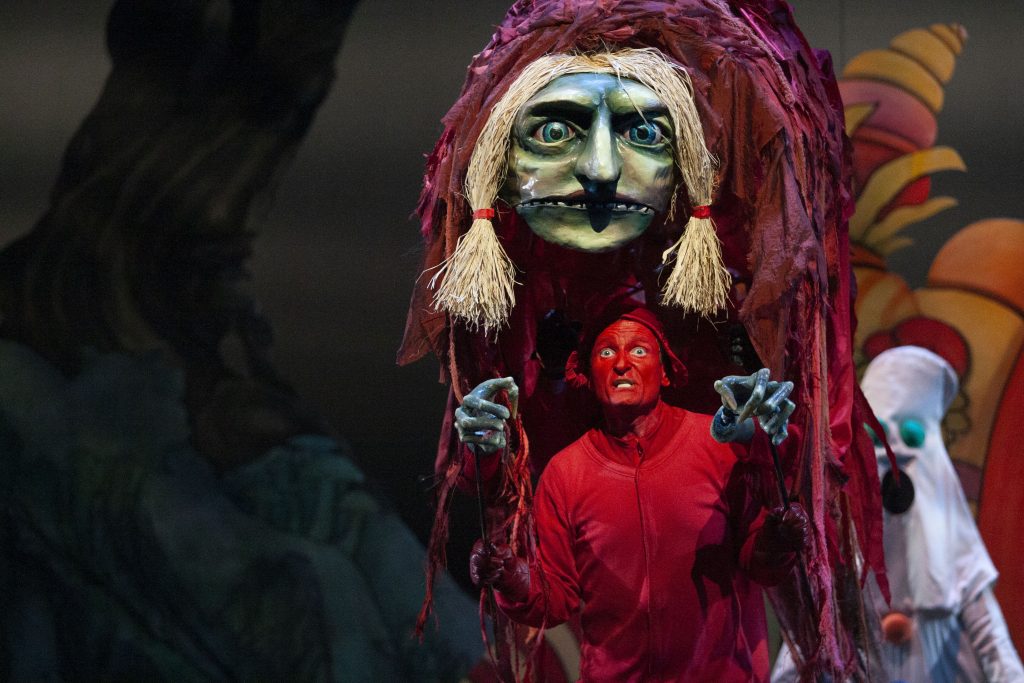 San Diego newcomers included soprano Devon Guthrie in the roles of Dew Fairy and Sandman and soprano Marcy Stonikas as Gertrude, the chastising mother of Hansel and Gretel. The astonishing vocal brilliance of Guthrie’s Dew Fairy, although a tiny role, provided the evening’s greatest vocal thrill to this listener. Stonikas’ ample, commanding soprano easily fit Humperdinck’s mother role, which strongly suggests a lack of sympathy for the children, perhaps a nod to other versions of the fairy tale where the mother assumes the “wicked stepmother” trope.

Under the tutelage of Martin Green, the 14 young treble singers that formed the opera’s children’s chorus added their sharp ensemble and vocal radiance to Gartland and Gaissert in the opera’s uplifting finale, a reprise and elaboration of the opera’s biggest hit, the devotional “Evening Prayer” that Hansel and Gretel intone before their hastily improvised nap on the forest floor. 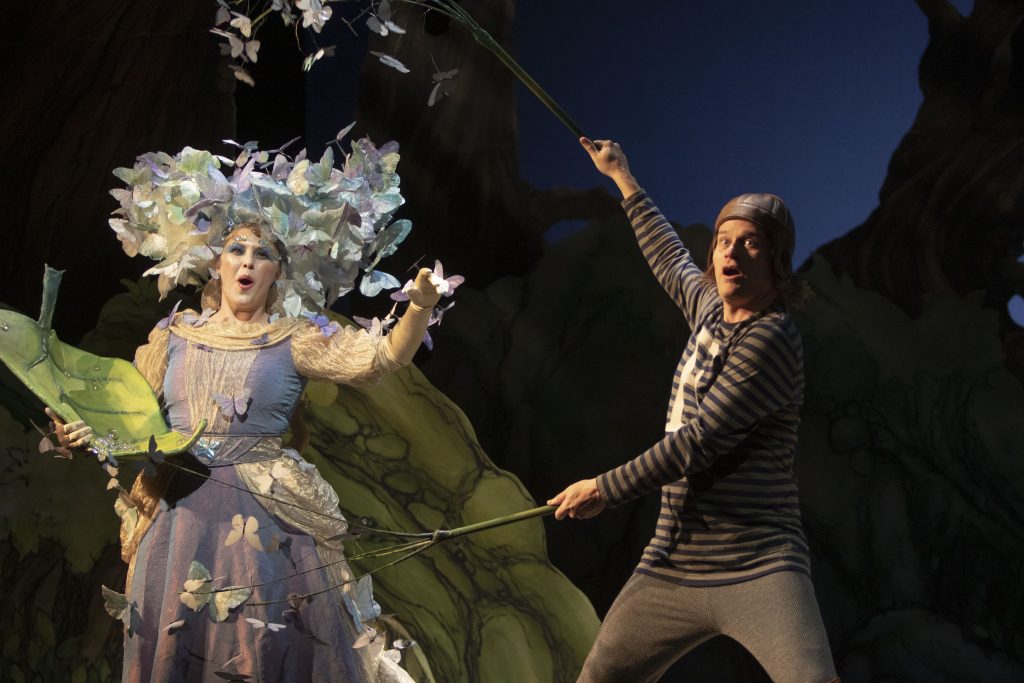 Most credit Humperdinck’s sumptuous orchestral score for keeping Hansel and Gretel firmly ensconced in the repertory—perhaps even more so than his vocal writing—and the musicians of the San Diego Symphony under guest conductor Ari Pelto provided a powerful, glowing account of this admirable work. The horn section’s gleaming opening—the richly harmonized setting of the “Evening Hymn”—set a high bar, which the orchestra maintained under Pelto’s assured leadership. Thanks to the composer’s skill and the orchestra’s finesse, even the charming folk dances unfolded with more grace and buoyant orchestral texture than those headache-inducing oompah accompaniments that propel so much of the orchestral accompaniment in Donizetti and early Verdi operas.

Although a newcomer to San Diego Opera, stage director Brenna Corner brought her experience directing the Vancouver production to bear, keeping the complex trajectories of the actors operating the animals and moving scenery in seamless coordination. She encouraged an exaggerated physicality from the singers, reinforcing the idea that they were more like the brightly-hued characters in a young child’s story book than true to life actors is a verismo melodrama. Corner is credited with the English translation of the German libretto, which we both heard from the singers and read on the supertitles. Corner chose to retain the rhyming couplets, which worked with linguistic felicity at least 90% of the time. Not a bad average for an entire opera text!